Please ensure Javascript is enabled for purposes of website accessibility
Log In Help Join The Motley Fool
Free Article Join Over 1 Million Premium Members And Get More In-Depth Stock Guidance and Research
By Rich Duprey - Nov 29, 2018 at 7:02AM

But the coffee maker may find there's not the same demand for an adult-beverage appliance.

Maybe Keurig Dr Pepper (DPS) got tired of hearing everyone else lauded for designing the next "Keurig of cocktails" machine because it now has partnered with Anheuser-Busch InBev (BUD 2.10%) to produce the real thing. The coffee appliance maker and the brewer formed a joint venture called Drinkworks to produce a countertop device that prepares pod-based cocktails, brews, ciders, and more.

The Drinkworks Home Bar uses pods like Keurig's single-serve coffee makers, but contain all the ingredients necessary to make a cocktail -- including the alcohol. The countertop bartender features 24 different recipes using "signature blends of premium spirits and natural flavors, which are precisely measured in each sealed pod."

Among some of the cocktails included are standards such as an old fashioned, cosmopolitan, and gin and tonic, as well as mai tais, margaritas, and white Russians. It also includes beer from Bass and Beck's and Stella Artois Cidre. 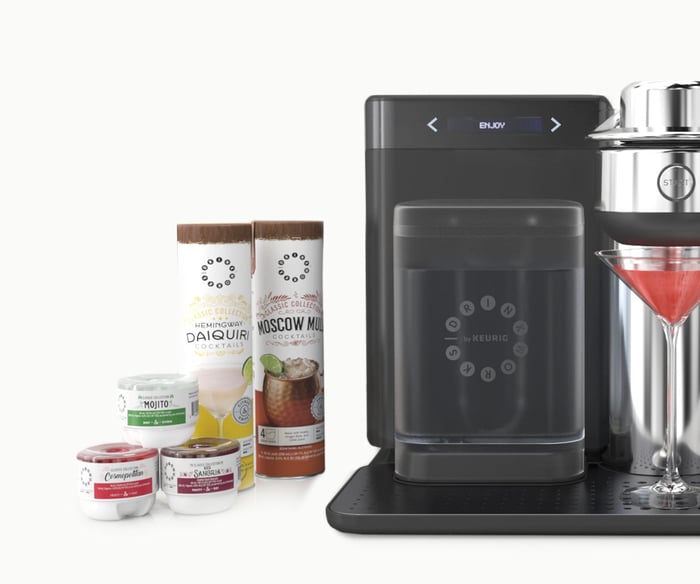 Not exactly a burgeoning market

Automated-drink systems really aren't anything new, as several exploded on the market with numerous Kickstarter campaigns that launched countertop appliances that made cocktails, including Monsieur and Somabar. They were preceded by Heineken tapping into the home-brew market with a high-end beer dispenser, while carbonated water leader Sodastream added sparkling wine to its lineup last year.

Although a dedicated beer dispenser would seem to be of limited utility -- how much harder is it to walk to your refrigerator to grab a beer from your six pack? -- a cocktail maker should have a broader market. Correctly mixing a cocktail is an art that isn't easily mastered, especially considering the wide variety of recipes that need to be remembered. Drinkworks makes it easy for anyone to be a mixologist.

It also shouldn't be a problem that Keurig and Anheuser-Busch are several years late to market. While the two unveiled a prototype of the device at the Consumer Electronics Show last year, the combination of the Keurig branding (the device is called Home Bar by Keurig) along with the marketing and distribution muscle of the brewer should be enough for the appliance to quickly grab market share.

But Keurig and AB InBev are taking a go-slow approach to introducing the robotic bartender, making the devices available first for preorder to customers in St. Louis before offering them to area bricks-and-mortar stores. Customers in California and Florida will be able to order them online from the Drinkworks website, too, starting early next year.

Does the market want this?

While this could be a success for the joint-venture partners, there may be a few drawbacks. The appliances are pricey, costing $299, or about the same price as a Keurig coffee maker. Although the pods are reasonable at $4 each, a cocktail machine isn't as much of a household essential as coffee, which may limit the Home Bar's appeal. Of course, consumers could have stuck with a $10 Mr. Coffee machine, yet they still flocked to the Keurig appliances.

Another potential issue is the exact makeup of the drink-pod ingredients. They come with a set amount of ingredients and the appliance determines whether to add water and whether it should be carbonated -- meaning the cocktail may be drinkable, but it could result in a very pedestrian adult beverage. There is no option for individual variation, though you could add more alcohol on your own, even if that negates the purpose of the device. And some drinks, like a gin and tonic, really are easy enough to make on your own.

The drinks menu also is limited compared to other devices like the Somabar, which offers over 300 drink combinations. But Somabar also found the consumer market was apparently a very limited opportunity, as it now makes its devices for restaurants, bars, and hotels and they cost $5,000 apiece, a significant scaling up over the $500 consumer version that you would have received during the Kickstarter campaign.

It makes some sense that Keurig should be the one offering a "Keurig of cocktails" appliance, and not allow the technology it developed for its failed Keurig Kold soda machine go to waste. Even with the assistance of Anheuser-Busch InBev, however, I'm not sure this will develop into anything more than a curiosity.