The flight paths of these two aviation-focused companies have diverged significantly in recent years.

The question of whether Boeing (BA 2.28%) or General Electric (GE -0.20%) is the better investment today is an interesting one, not least because the two companies have had vastly different fortunes in the last few years. Boeing stock is up a whopping 180% in the last three years while General Electric fell by 69% over the same period. However, investing is all about looking forward. Is the story in 2019 going to be the same as it has been? Let's take a closer look at the investment thesis for each of these stocks.

The outlook for Boeing stock in 2019

There are four key things to look out for with Boeing in 2019.

First, management plans to ramp up 737 production from 2018's rate of 52 aircraft a month to 57 in 2019, and 787 Dreamliner production is expected to grow from 12 a month to 14. Thus far, Boeing has managed to deal with the stresses on its supply chain that its accelerating production have caused -- such as CFM International (a joint venture between GE and Safran) falling behind its production target for LEAP engines (used on the 737 MAX) -- but the question is whether it can keep that up in 2019? 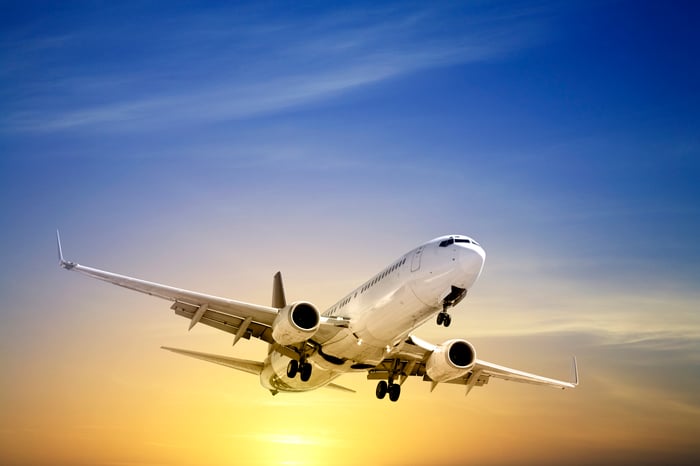 Second, Boeing's management believes it can get Boeing Commercial Airplanes' (BCA) operating margin up to at least 15% by the end of the decade -- the last forecast called for it to land in the 12% to 12.5% range in 2018. Investors should watch BCA's progress on margins in 2019, particularly in the light of its ongoing plans to cut supply costs and expand its own manufacturing operations.

Third, Boeing Global Services (BGS) represents a growth opportunity for the company, which seeks to expand its offerings beyond aircraft manufacturing. CEO Denis Muilenburg believes BGS can grow faster than the long-term market growth rate of 3.5% -- something for investors to look out for in 2019.

Fourth, there are the usual caveats around global economic growth. Although fears regarding Boeing's direct exposure to the U.S./China trade dispute are probably overstated, it's a fact that Asian passenger and freight traffic growth are key parts of the rosy long-term outlook for the commercial aviation industry; any economic slowdown in the region will force investors to reassess the company's long-term prospects.

All told, the case for Boeing stock rests on it continuing the excellent execution of recent years, compounded by ongoing strength in end markets.

The case for General Electric stock in 2019

The situation couldn't be any more difficult for GE. The last thing shareholders want is for the company to continue in the direction it's been moving for the last couple of years. The previous top management continually underestimated the scale of the deterioration at GE Power, causing a series of overly optimistic earnings and free cash flow (FCF) projections that severely damaged the credibility of the company's guidance.

Consequently, bondholders were left worrying over the viability of GE's plan to improve its balance sheet and pay off the $50 billion worth of debt that will mature in the next five years.

Meanwhile, GE Capital needs funding, and there are doubts over future tax and insurance liabilities, not to mention an ongoing SEC investigation into its accounting.

That said, new CEO Larry Culp is highly regarded, and he's already told investors that GE Power was "getting close" to a bottom. Right now, most investors will be happy if he guides toward the kind of low-single-digit margin that Siemens expects for its power segment in 2019. https://www.fool.com/investing/2018/11/21/ge-investors-heres-what-siemens-management-just-sa.aspx

In addition, Culp has the capability to reduce GE's debt burden via asset sales, and he even has the option to monetize more of the GE Healthcare spin-off than former CEO John Flannery planned to do; this would help shore up the balance sheet.

What Culp needs to do during his next earnings call is convince investors that the debt reduction plans are viable, and that GE Power is back to the path to margin expansion. If he can do that, then investors' focus will shift back onto what GE's guidance is for the next few years. Some analysts think GE could guide toward $4.8 billion in FCF from the current portfolio in 2019. Based on its current market cap, that would put GE on a forward price to FCF multiple of 16.3 -- a notable discount to the current multiples of Honeywell (17.2) and United Technologies (19.6).

There is a case for both of these company's shares, so this debate is probably academic to most investors, but competitions have winners, and in this case, that winner is Boeing. As we've seen above, the case for Boeing is based on a continuation of trends and management execution, while GE is a turnaround story -- meaning investors should have greater confidence in Boeing's ability to deliver.

In addition, the 19% rise in GE's stock price so far this year suggests investors have already started to price in a better outlook for the company, even while there's still a lot of uncertainty about GE Capital.

All told, Boeing is the better stock right now, but the better investment choice might be just to buy both.