And while that's led many investors to expect 2018 to be a bounce-back year for mining stocks, there are no promises. After all, gold prices finished 2018 relatively flat, while silver "only" declined about 9%. Furthermore, both precious metals, which make up a pretty large chunk of global mining dollars, gained value the last three months of the year, while mining stocks continued to plummet. It can be very hard to predict commodity prices (especially gold) -- and just buying a basket of mining stocks, on expectations that most will go up, can be a great way to lose money. 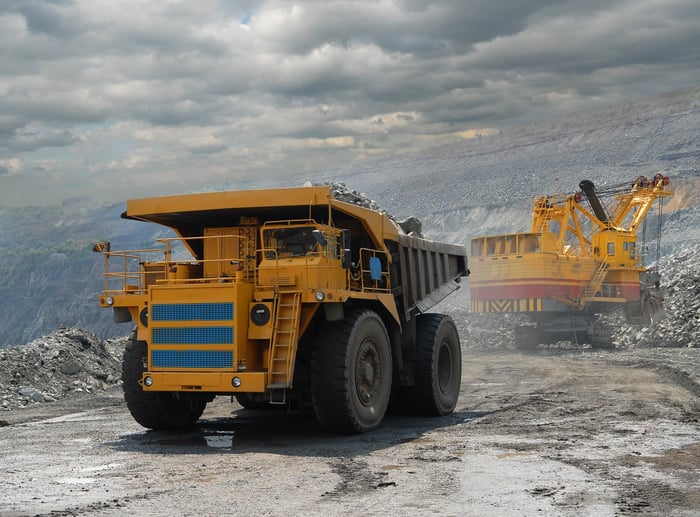 Instead, investors can do better by finding the top mining stocks best-positioned to deliver solid returns. We asked three Motley Fool contributors to give us their best ideas for mining-stock profits. They identified low-cost silver producer First Majestic Silver (AG -1.00%); a once-great miner that's returning to its roots, BHP Group (BHP -0.30%); and one of the most important mining-equipment manufacturers in the world, Caterpillar (CAT -1.15%).

This high-quality silver miner has low costs and solid prospects

Jason Hall (First Majestic Silver): I'm generally not much of a fan of precious-metals miners, because so many factors that are well outside of their control can have major consequences on their results. But I think First Majestic, which focuses mainly on silver and owns a substantial amount of low-cost resources, is worth a close look.

First Majestic owns mines exclusively in Mexico, with silver accounting for about two-thirds of its output. Furthermore, the company's cash mining costs are set to improve from around $7.50 per ounce in 2018 to between $6.39 and $7.37 per ounce in 2019, and it's this low-cost production that makes it attractive.

Furthermore, First Majestic's all-in costs are on track to make it solidly profitable in 2019. A recent deal with a large streaming company is helping to fund a substantial investment in growing production from its San Dimas mine, which will play a big role in helping Majestic generate all-in sustaining costs between $12.55 and $14.23 per ounce. I expect the price of silver to remain above those levels, because its utility value is quite high. And demand across a number of key growth industries, such as electric vehicles, solar equipment, and energy storage (like batteries), is already ramping up.

With falling all-in costs, some of the best low-cost silver production in the world, a relatively strong balance sheet without a lot of debt, and what appears to be a growing tailwind for industrial silver demand, investors would do well to keep an eye on First Majestic.

Slimming down to boost shareholder returns

Matt DiLallo (BHP Group): For years, global resource giant BHP Group thought that bigger was better. The company spent billions of dollars expanding its empire. All that growth, however, stretched the company too thin; weakening commodity prices ate into its cash flows and put pressure on its balance sheet. As a result, BHP destroyed shareholder value rather than creating it.

The company started shifting its strategy in 2016, unveiling a six-point plan aimed at growing value and shareholder returns. It's made steady progress on that plan over the years, recently completing the final point by selling its U.S. shale assets for $10.4 billion. BHP returned all that capital to shareholders, half through a share repurchase program and the rest via a special dividend that it will pay out later this month.

With that step complete, the company will allocate the cash flow generated by its world-class resources to create and return value for shareholders. BHP plans to pay out a minimum of 50% of its cash to investors via a variable dividend, and use the other portion to finance high-return growth initiatives, as well as additional cash returns to shareholders through buybacks or special dividends. The strategy should enable BHP Group to steadily grow the value of the company while rewarding shareholders along the way. That differentiated approach makes this mining stock an interesting one to watch.

Travis Hoium (Caterpillar): A lot of companies are purer plays on mining than Caterpillar, but few provide a broad view of what's going on in the overall mining industry. Caterpillar's earnings report for the fourth quarter of 2018 is coming out on Jan. 28, which is why it's a stock to watch this month.

In the third quarter of 2018, total sales into resource industries (which includes mining) rose 35% to $2.64 billion, and management said in the earnings release that positive market conditions drove growth:

The increase was primarily due to higher demand for both mining and heavy construction equipment. Commodity market fundamentals remained positive, contributing to higher mining equipment sales. In addition, increased sales to heavy construction and quarry and aggregate customers were driven by positive global economic growth.

What investors will want to watch is whether declining commodity prices hurt equipment demand, and therefore mining overall. You can see below that oil has been hurt more in the last three months than most mining commodities, but the market is trending lower over the last six months: 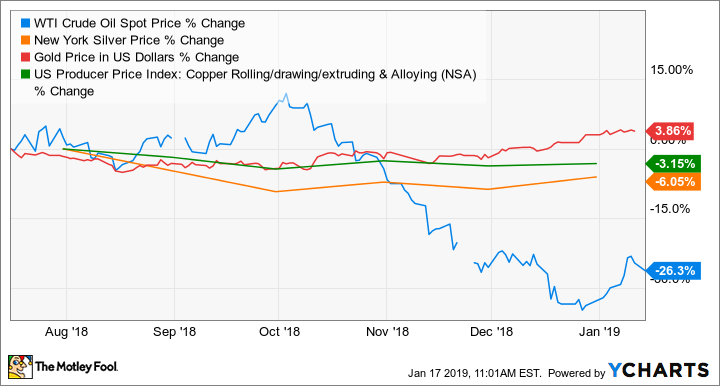 We're also seeing signs that the global economy, particularly in China, is starting to slow. Caterpillar will give investors a better look into how that's affecting commodities and capital spending, so keep an eye on it this month.