Humanity is about to return to the moon -- this time for real.

There was a lot of excitement in space circles when, late last year, NASA announced plans to award "Commercial Lunar Payload Delivery Services" contracts to nine separate companies to develop a new lunar lander. Then we saw the fine print: This will be a robotic lander, remote controlled, no humans on board.

But the news this time is better: In a multi-page "solicitation," NASA just outlined a new project to develop a fully fledged "Human Landing System" to put boots on the ground (so to speak) for the first time since 1972 . Now, at this early hour, it's too soon to say who all will respond to NASA's solicitation -- much less who will win the contracts. But here's what we do know. 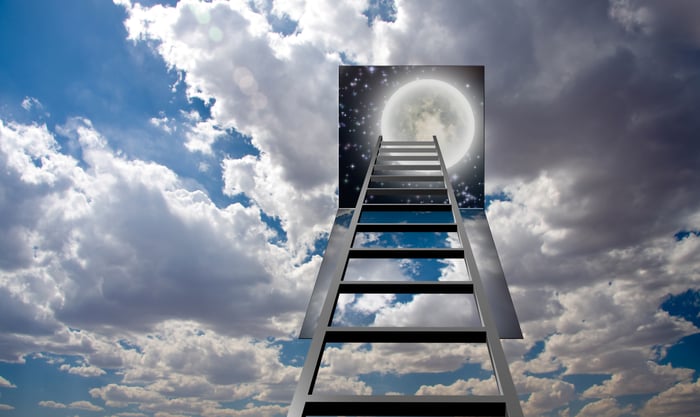 Three steps to the moon

NASA is planning its return to the moon in three broad stages. Here are the first two:

With fuel tanks topped off and a crew in place, all the elements that were tested in 2026 will now be employed to depart from the space station to conduct the first moon landing in 56 years!

Seriously, NASA? A space station and a tug and a lander and a launcher?

Now, if all this sounds rather complicated, that's because it is. NASA's "Human Landing System" is a complex beast. It also all hinges on several complicated parts arriving in five years at a lunar gateway space station that...currently doesn't exist. In contrast, Elon Musk's plan to send a Big Falcon Rocket (BFR, also known as Super Heavy and Starship) into Earth orbit, refuel it there, then fly it to the moon, land, launch again, and land on Earth, sounds infinitely simpler.

Initially, NASA is looking to spend anywhere from $300,000 to $9 million per development contract awarded, and between $30 million and $40 million total. (Mind you, this is for development only. The actual hardware, and the price of moving it from Earth to moon, will cost quite a bit more). With that larger payday in mind, it's probably safe to assume that space companies both large and small -- Boeing and Lockheed and Northrop to start with, and probably Jeff Bezos' Blue Origin and Elon Musk's SpaceX besides -- will bid for their pieces of the pie.

Indeed, it seems that Elon Musk has already decided to bow to the inevitable and at least submit a bid for NASA's white elephant landing system -- er, "Human Landing System" -- even if he doesn't necessarily agree with NASA's strategy. Last week, Ars Technica senior space editor Eric Berger reported that "SpaceX will submit a lunar lander design" to NASA.

It's not yet known precisely what SpaceX will propose. Famously feisty Musk might decide to rub NASA's nose in the unnecessary complexity of its plan by submitting a bid to build BFR and calling the world's biggest rocketship a "lander" -- which it technically would be, just a lander that comes with a launcher and an Earth launch system included. Alternatively, SpaceX might revive its currently shelved "Red Dragon" propulsive-landing crew capsule project, and rebid it as a "Gray Dragon" that could conduct moon landings for NASA.

Probably option B is more likely. NASA pointedly says in its solicitation that "proposals not aligned with the Elements of the HLS as described above, while potentially valuable to NASA, are outside the scope of this BAA" -- a note that seems directly aimed at heading off a BFR bid by SpaceX.

SpaceX will almost certainly also submit bids -- once they're solicited -- for contracts to have its Falcon 9, Falcon Heavy, and/or BFR rockets carry the multitudinous Human Landing System parts from Earth to the moon. Indeed, Musk seemed to say as much in a recent tweet discussing new tests on its "Raptor" engines, explaining they're being designed "to reach the moon as fast as possible." I'd expect Boeing and Lockheed, in the form of their United Launch Alliance venture, to do likewise. And if Blue Origin has its New Glenn rocketship ready for flight by the time 2024, 2026, or 2028 rolls around, expect a bid by Bezos as well.