Please ensure Javascript is enabled for purposes of website accessibility
Log In Help Join The Motley Fool
Free Article Join Over 1 Million Premium Members And Get More In-Depth Stock Guidance and Research
By John Rosevear – Updated May 16, 2019 at 3:37PM

Development costs for an upcoming SUV put a dent in the bottom line.

British supercar maker Aston Martin Lagonda (AML -6.53%) said on May 15 that its first-quarter earnings fell sharply, despite a jump in sales, on a weaker product mix and increased spending on future products.

Aston Martin's adjusted earnings before interest, tax, depreciation, and amortization fell 35% from the first quarter of 2018, to 28.3 million pounds ($37 million). Wall Street analysts had expected a profit of 31 million pounds, on average.

Aston Martin reports its results in British pounds. As of March 29, the last trading day of the first quarter, 1 British pound = about $1.31.

Aston Martin distinguishes between its "core" products -- the regular models that the company builds to order -- and limited-run, very-high-priced "specials." Both are profitable, but the specials are very profitable and help to boost Aston's margins. 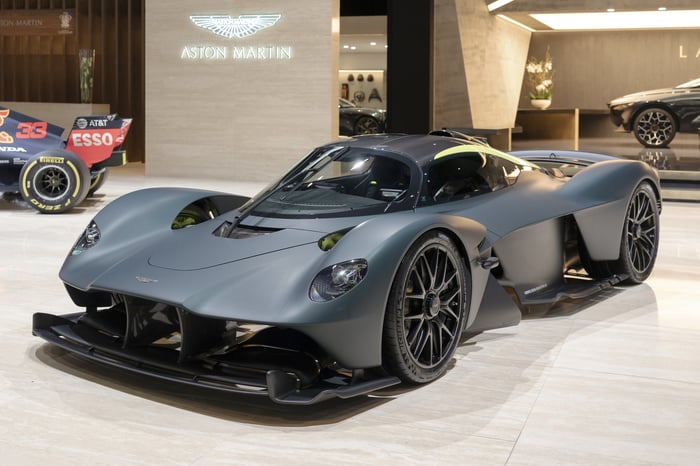 That's important to understanding how the quarter went. In a nutshell: Sales were up, but the company sold fewer specials (32) than it did in the first quarter of 2018 (48), while sales of core units rose 12% from a year ago. The overall average selling price fell to about 160,000 pounds from 177,000 pounds in the year-ago quarter.

That said, sales were good as dealers reduced inventories from high fourth-quarter levels. Retail sales rose 39% from a year ago, while wholesale shipments rose 10% overall, with strong year-over-year gains in the Americas (20%) and Asia Pacific (30%) more than offsetting declines in the U.K. (-9%) and mainland Europe (-4%). (Investors should focus on wholesales because Aston Martin books revenue when vehicles are shipped to its dealers, but the big gain in retail sales shows us that demand is strong.)

But those sales gains didn't translate to the bottom line, because spending rose. Adjusted operating expenses rose 41% from a year ago, to 85 million pounds, as the company ramped up investments in its upcoming SUV model (called the DBX) and a new factory in Wales.

The company had one special item in the first quarter, a noncash charge of about 1 million pounds related to employee incentives that predate the company's initial public offering in October of 2018.

Aston Martin maintained the cautious guidance it gave in March. For the full year, it still expects:

CEO Andy Palmer noted that because the company expects to begin shipping new specials in volume in the fourth quarter of 2019, and because it expects its fixed-cost run rate to fall as the year goes on, the second half of the year will likely be quite a bit more profitable than the first half.

Aston Martin Lagonda's Profit Grew in 2018, but Brexit Looms Over 2019