British luxury sports-car maker Aston Martin (LSE:AML) said that it has secured $150 million in new financing, enough to ensure that it can complete and launch an important new model.

But there's a catch: The company is paying a hefty interest rate, suggesting that its options for financing were severely limited -- and it's running out of financial breathing room.

What Aston Martin said about the new financing

Aston Martin said that it has priced and placed $150 million in "senior secured notes" that are due April 15, 2022. The notes -- short-term bonds that will have high priority if Aston Martin should go bankrupt -- will pay 12% interest. Half of that will be paid as "PIK" (for "payment in kind") interest, meaning that the company can service it by raising additional debt.

The new financing is intended to ensure that Aston Martin can complete and launch the DBX, a new SUV model that is key to CEO Andy Palmer's turnaround plan for the company. 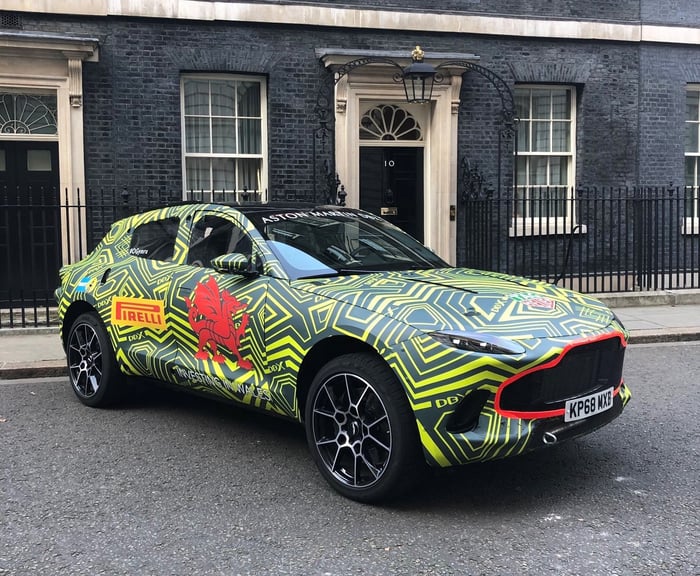 If Aston can get 1,400 orders for the DBX within nine months of the issuance of the notes, it has the option to issue another $100 million worth of senior secured notes on the same terms. If the order total falls short, it can issue $100 million in unsecured notes with an interest rate of 15%.

What it means for Aston Martin

Aston Martin's shares have fallen 73% since the company's initial public offering last October, largely on concerns that the company might not have sufficient cash to launch the DBX and other new models if global sales slump.

Specifically, analysts have expressed concerns about Aston's ability to fully fund the launch of the DBX, given a slowing global market for luxury vehicles and potential supply and business disruptions if and when the U.K. leaves the European Union.

In an interview with Reuters, Palmer noted those concerns and said that they should now be allayed. He said that short-term debt was the best tool available to boost the company's cash reserves, as he expects Aston Martin to be in a good position to repay the debt once the DBX is successfully launched.

This isn't the first time that Aston Martin has raised cash since its IPO. Financial Times reported yesterday that the company raised 20 million pounds ($24.7 million) in August via a previously undisclosed loan. It also drew down 70 million pounds from its 80-million-pound credit line earlier in 2019. Both of those loans will be repaid using the funds from this bond issue, Financial Times said.

Aston Martin had 127 million pounds (about $160 million) in cash as of the end of the second quarter.

Simply put, this is a secured short-term loan at a very high interest rate, with an option to borrow more money at (possibly) an even higher rate later on. It suggests that the company felt an urgent need to raise funds and didn't have other options.

After the issue was announced, Standard and Poor's cut the company's credit rating to CCC+, one of the lowest junk levels, stating, "We believe that [Aston Martin] has reached the ceiling in terms of the amount of term debt and cash interest burden that it can sustainably service."

In other words, Aston Martin has maxed out its credit card. That's a worrisome development for investors -- but on the other hand, if Palmer and his team can pull this off, the company's current stock price will seem crazy cheap in retrospect.

Long story short, this stock is now a long shot that could be a total loss -- or it could pay off nicely. Proceed with caution.