What do you do when your Tesla just isn't fancy enough anymore -- but you're committed to the idea of zero-emission driving?

British supercar maker Aston Martin Lagonda (LSE:AML) hopes to have a couple of possible answers to that question in a few years -- and the sharply styled SUV you see here is one of them.

It's called the Lagonda All-Terrain Concept, and it's an early preview of a battery-electric ultra-luxury SUV that Aston Martin plans to begin producing in a few years. But can a tiny, century-plus-old luxury automaker hope to compete with the wave of high-tech electric vehicles coming to market over the next few years? 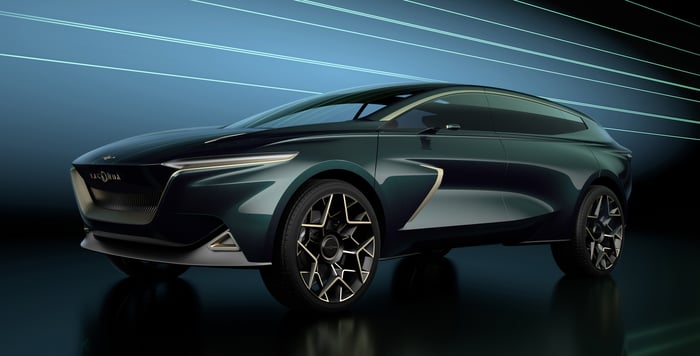 Think of the Lagonda All-Terrain Concept as an early draft of an ultra-luxury electric SUV coming in 2022. Image source: Aston Martin Lagonda Ltd.

Good question, as Lagonda isn't exactly a well-known brand outside of car-nerd circles. Founded in 1906, Lagonda was a maker of high-end luxury sedans that competed with the likes of Rolls-Royce and Bentley until it fell on hard times shortly before World War II. Aston Martin acquired Lagonda in 1947, and it has used Lagonda as a brand name on occasion for luxury sedans that fall outside of the core Aston Martin range of sports and grand touring cars.

Now Aston Martin is gearing up to relaunch Lagonda as a brand of electric-only super-luxury vehicles in 2022.

Aston Martin said that it's "an ultra-stylish, supremely luxurious, fully electric emission-free vehicle that can transport its occupants to remote and spectacular locations."

Inside, it's very plush, but that plushness is achieved with renewable materials like cashmere, instead of the wood and leather that are traditional in luxury vehicles. Somewhat surprisingly, despite the vehicle's considerable size, it's a four-seater -- and when fully autonomous driving becomes available, the front seats will be able to rotate so that the passengers can face one another while they travel. 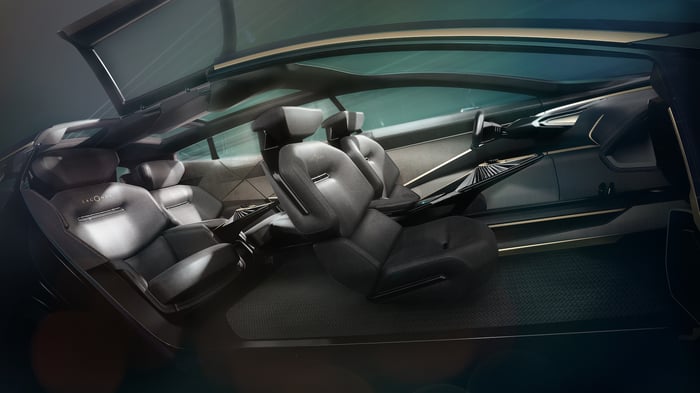 For now, it's a show car, and that means some flights of designer fancy are inevitable. But don't let that fool you: Aston Martin is very serious about building something like the Lagonda All-Terrain Concept. Image source: Aston Martin Lagonda Ltd.

"This is a car that would be at home whisking someone straight from a glamorous red-carpet event to a remote scientific research lab," CEO Andy Palmer said. "It shows the bold possibilities for Lagonda and demonstrates how the company will push to expand horizons in every area, whether it be technology, design, or scope of travel."

Aston Martin didn't share any specifics about the vehicle's technology or drivetrain, except to say that the battery pack will be built into the floor (as is fast becoming standard practice in the industry). I don't think the company's hiding anything; I think it probably doesn't yet know for sure what the vehicle's range or capabilities will be.

What we do know is that when this Lagonda (or something like it) goes into production, it'll be built in a new factory in St Athan, Wales, alongside the futuristic-looking Lagonda sedan that Aston Martin first showed a year ago.

Is this really going to happen?

On the one hand, relaunching a brand that hardly anyone living has heard of as a futuristic luxury brand seems like a daunting challenge. It's even more daunting when we get to the specifics of the products. Aston Martin is a tiny company. Will it have the ability to develop a competitive electric drivetrain (much less any self-driving technology) by 2022? 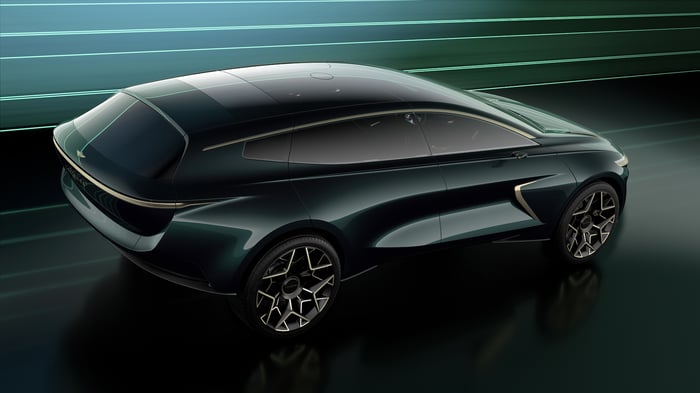 The production version could look more like this show car than you might think, at least on the outside. Image source: Aston Martin Lagonda Ltd.

On the other hand, Palmer is a Nissan veteran who was involved with the launch of the original battery-electric Leaf -- he knows what's what when it comes to manufacturing electric vehicles. And his track record since taking Aston's helm has been very good: Sales have been growing, and Palmer has a convincing plan to keep them growing.

The relaunch of Lagonda is part of that plan. If successful, it will accomplish two things. First, it will diversify Aston Martin's product portfolio, attracting new, well-heeled customers who might have no interest in brawny luxury sports cars -- or in internal combustion engines of any kind. Second, it will show investors that Aston Martin can adapt and thrive as the world moves away from gasoline.

It looks like a long shot. But as long as the global economy is strong in 2022, I would be hesitant to bet against Palmer and his team. Watch this one.