British supercar maker Aston Martin (LSE:AML) said it swung to a loss in the first half of 2019 as lower demand in Europe, a planned increase in spending, and a weaker "mix" of products sold more than offset the benefits of higher retail demand in the U.S. and China.

Aston Martin's shares fell sharply in trading in London after the news was released. 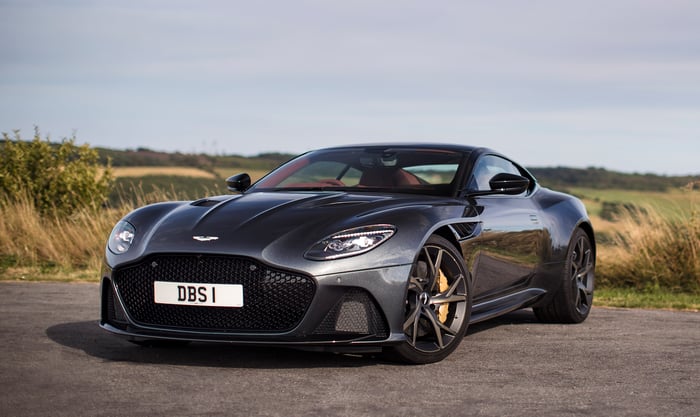 Aston Martin reports its results in British pounds. As of June 30, the last day of the second quarter, 1 British pound = about $1.26.

Data source: Aston Martin Lagonda Holdings Ltd. "EBITDA" is earnings before interest, tax, depreciation, and amortization. "EBIT" is earnings before interest and tax. "Vehicles shipped" are wholesales. "Adjusted" figures exclude one-time items, in this case non-cash charges of 2.5 million pounds for employee incentives predating the company's initial public offering in October 2018. Aston Martin had no one-time items in the first half of 2018.

What happened at Aston Martin in the first half of 2019

CEO Andy Palmer has been working on a long-term turnaround for Aston Martin for several years. The plan involves a range of new models, including some in new market segments, intended to ensure that the company remains sustainably profitable.

Full results of the plan won't be seen for a few more years. But some of the intermediate steps have proven difficult -- and those difficulties have been exacerbated by weakness in Aston's home markets, the U.K. and mainland Europe.

"We are disappointed that our projections for wholesales have fallen short of our original targets impacted by weakness in two of our key markets as well as continued macro-economic uncertainty," Palmer said. "Accordingly, we have taken action to reduce wholesale guidance for 2019. We are also improving efficiency across the business, while protecting the brand."

Aston Martin cut its full-year guidance. For the full year, it now expects:

Palmer reiterated that because the company expects to begin shipping new, high-priced "Special" models later this year, and because it expects its fixed-cost run rate to fall as the year unfolds, the company will likely deliver better bottom-line results in the second half of 2019, particularly in the fourth quarter.