AT&T (NYSE:T), short for the American Telephone & Telegraph Company, has its roots in Alexander Graham Bell's invention of the telephone itself in 1876, and the subsequent founding of the Bell Telephone Company in 1880.

Yet the AT&T of today is innovating to be a leader in not only the future of communications, but also the future of media. Both businesses have been somewhat disrupted by the internet and wireless communications, but through both a slew of acquisitions and heavy capital expenditures on fiber and wireless technologies, AT&T is once again trying to reclaim the throne as a technological leader, not a relic of a bygone era.

Can the old Ma Bell do it? Here are all the moves AT&T is making, and what the company could look like five years out. 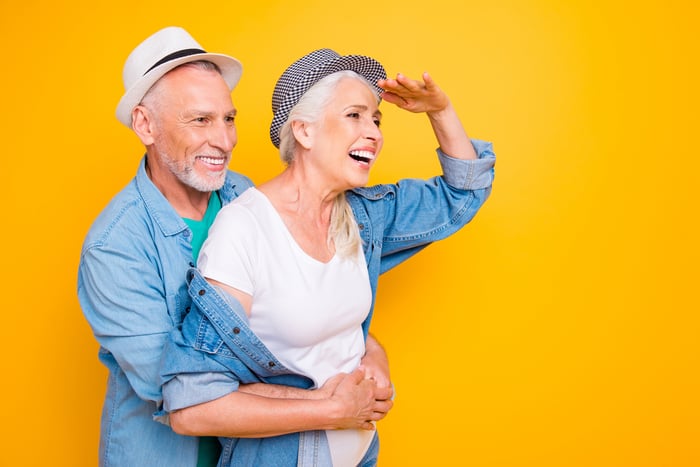 AT&T is trying to get younger. Image source: Getty Images.

The future of communications: 5G

Even if you aren't familiar with the telecom industry, you've likely seen recent ads for 5G communications. This is the next generation of wireless phone communications from 4G, which came out exactly 10 years ago. 4G was the first telephone system based on internet protocol connections, as opposed to traditional phone circuit switches, allowing the super-fast LTE mobile communications we have today.

5G will, in theory, take this to a whole other level, with ultra-fast, potentially multi-gigabit-per-second connections. That could theoretically eclipse 100 times the speed of 4G. The new technology will use a combination of fiber-optic cable and millimeter-wave radios to deliver ultra-fast, fiber-like speeds wirelessly. These new ultra-fast connections could open up a bunch of new technological applications such as the Internet of Things, self-driving cars, or mobile 4K streaming media. Likely, there are even more applications that we haven't even imagined that will be enabled by 5G.

However, while AT&T and its competitors are racing to be leaders in 5G, even the leaders don't expect material revenue for a couple years. Though AT&T has branded its upgraded 4G services as "5G Evolution," it's not really 5G. 5G infrastructure is also incredibly expensive and complicated, and built on a combination of different technologies.

Nevertheless, AT&T is going about the 5G race in a pretty intelligent manner. AT&T has installed 5G hardware in 20 markets, with management initially targeting business customers that stand to benefit the most from early adoption of this new lightning-fast network. The company plans to roll out 5G capabilities to 200 million points-of-presence (POPs, access point connections to the internet) by the end of the year.

In combination with this focus on early business adopters, AT&T also won the contract to build out FirstNet from the First Responder Network Authority in 2017, an exclusive nationwide network for first responders. The contract and captive customer base allows AT&T to build out the fiber and tower capability, receive valuable 20 MHz spectrum, and even get reimbursed for a large portion of build-out costs along the way.

AT&T will thus have captive customers in enterprises and first responders, allowing it to build the expensive next-gen 5G network over the next few years without a huge hit to cash flow. When consumers begin to acquire 5G phones, AT&T will be able to "flip a switch" with software upgrades to enable broader 5G speeds nationwide.

Thus, five years out, AT&T should be the owner of the nation's leading 5G network -- a stark contrast from its old telephone switching infrastructure.

The future of media: Streaming

Like the switch from old telephony to IP-based 5G, AT&T is also innovating its media assets from the old domestic cable distribution model to over-the-top internet streaming. In the age of rising cable bills and Netflix, AT&T is cobbling together past acquisitions DirecTV, which it purchased in 2015, Time Warner, which the company acquired last year, and AppNexus, which it also acquired last year, into a more modern media platform.

Though DirecTV's legacy satellite service is declining, it should still throw off cash for years to come as AT&T pivots to more streaming options. Currently, it appears AT&T has three main streaming services, either in service now or its future pipeline: DIRECTV NOW, AT&T's current OTT bundle, the recently announced HBO MAX streaming service coming in 2020, and the newly mentioned AT&T TV, which the company will be testing this summer.

It's unclear exactly how AT&T TV will be materially different from DIRECTV NOW, but on the recent analyst conference call, management said AT&T TV would lower customer acquisition costs by about half, and would be for "thin client" broadband customers, which likely means it will be a low-cost option. AT&T has seen some DIRECTV customer churn as it's raised prices, so this is perhaps filling in the product line for the cost-conscious consumer.

For both DirecTV and AT&T TV, AT&T will also be utilizing its AppNexus acquisition, now part of AT&T's digital advertising service Xandr, to give advertisers more targeted ad capabilities via programmatic advertising. This will allow AT&T to charge more per ad, while also limiting its ad load to maintain the customer experience.

Five years out, it's likely AT&T will have figured out its these various customer segments, and will be armed with both a live TV offering and WarnerMedia content via HBO MAX, all delivered over its super-fast nationwide 5G network.