3M (NYSE:MMM) reports earnings later this month. Investors should prepare themselves for what could be a disappointing report, and it's fair to say that the company needs to convince investors it's on the right track after a difficult year. That said, there are also some positives out there, not least raw material cost moderation and some signs of better pricing power. So let's take a close look at the three things investors need to look out for.

While it's never a good idea to be overly focused on one quarter's earnings, it's a fact that 3M has had a hard time meeting its guidance in recent years. So any more disappointments can't just be written off as being just one bad quarter. 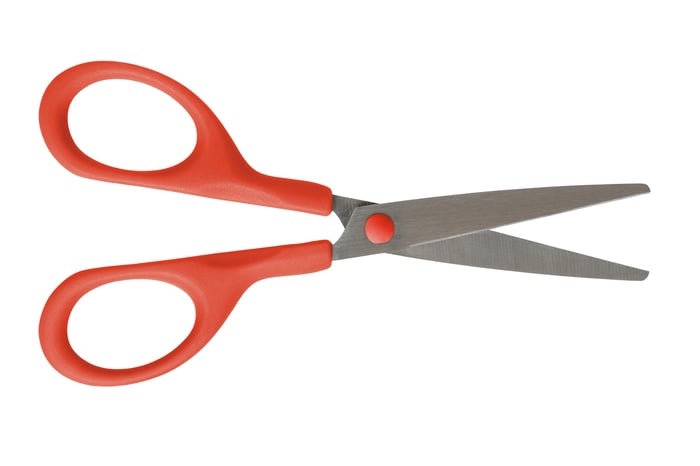 Unfortunately, the evidence is that 3M will be under pressure to cut full-year sales and earnings guidance. CFO Nick Gangestad gave a presentation at an investor conference recently and said that organic revenue growth would come in "closer to flat" for the third-quarter, at the bottom end of management's previous expectation for flat to low-single-digits. Here's how that looks in the scheme of performance and guidance.

It's worth remembering that 3M's initial full-year organic sales growth guidance was for a 2%-4% improvement. Given that key end markets -- namely automotive, electronics, and China -- appear to be worsening, and third-quarter sales growth is due in at the low end of expectations, don't be surprised if 3M cuts full-year guidance.

Frankly, management deserves criticism for being overly optimistic with its guidance following the second quarter of 2018, just as it was on healthcare guidance when an ERP rollout in the segment caused the same impact in 2017. 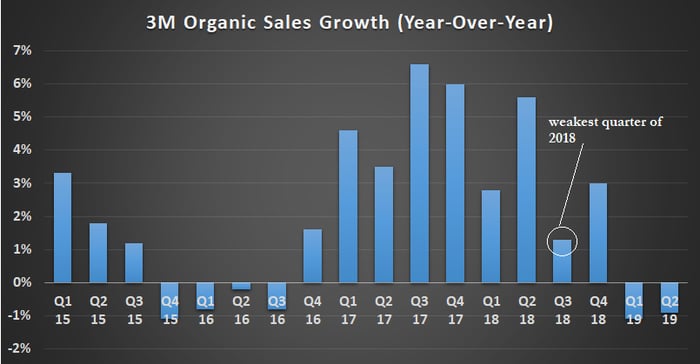 Given the oncoming tougher comparable with the fourth quarter of 2018, there's definitely pressure on 3M's full-year sales and earnings guidance.

Keep a close eye on the consumer and healthcare segments

One of the criticisms leveled against 3M in recent years is its less cyclical businesses have fallen behind expectations. As you can see below, the healthcare and consumer segments have had patchy growth in the last few years.

For reference, management outlined expectations for average annual growth in the 2019-2023 period of 4%-6% in healthcare and 2%-4% in consumer (the previous mid-term 2016-2020 guidance was for 4%-6% and 3%-5% respectively). As you can see below, the two segments have struggled to meet the low end of these guidance ranges in recent years. 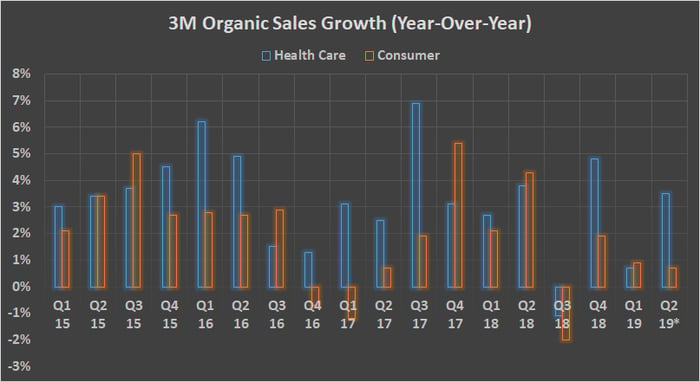 Data source: 3M presentations. Chart by author. *Both segments were reorganized in the second-quarter with retail auto care added to consumer business, and separation & purification added to healthcare.

Looking at the upcoming third quarter, it's clear that both segments are coming up against weak comparisons in 2018, so don't be surprised if 3M reports good-looking numbers from these segments -- the question is how good they will be.

Management has previously highlighted three areas of concern -- specifically China, consumer electronics, and automotive. As such, investors should listen for any commentary on these areas. For example, 3M electronics makes materials for electronics displays, and machine vision company Cognex (NASDAQ:CGNX) has seen a drop off in spending from smartphone customers using Cognex's systems in order to monitor and guide display bonding.

In addition, Cognex and other automation and robotics stocks, such as Rockwell Automation, have seen deteriorating outlooks for spending in the automotive industry and China in 2019.

A note of optimism

Looking into the results, it's worth pausing to reflect that although 3M's near-term prospects are under threat and guidance could be cut, much of this might already be baked into investor sentiment.

In this regard, it's probably a good idea to focus on the ongoing development of the business, and that probably starts with an improvement in growth in the healthcare and consumer segments. In addition, Gangestad has spoken of the company improving its pricing power while seeing raw material costs coming down -- and both are good things for margin. However, don't expect too much good news on current trading.