WWE’s stock is 50% cheaper than in April. A positive outlook for 2020 and a lower valuation might represent an opportunity to buy.

World Wrestling Entertainment (WWE 0.53%) shares dropped 36% to $63.50 from April to August 2019, before stabilizing for several months. Following Q3 earnings, the stock sank again, this time dropping 18% to $55.70. The initial decline followed an earnings report that included falling revenue across multiple segments and net losses, which the sports entertainment company attributed to on-air talent missing time due to injuries.

While company management pointed to returning wrestlers and the launch of televised events on Fox (FOX -3.38%) as reasons for optimism later in the year, Q3 earnings showed continued weakness. Quarterly revenues once again fell 1.1% year-over-year, with falling live-event ticket and merchandise sales offsetting gains from media content. WWE returned to profitability in the quarter, but its net income of $5.8 million was drastically lower than the $33.6 million from the prior year. 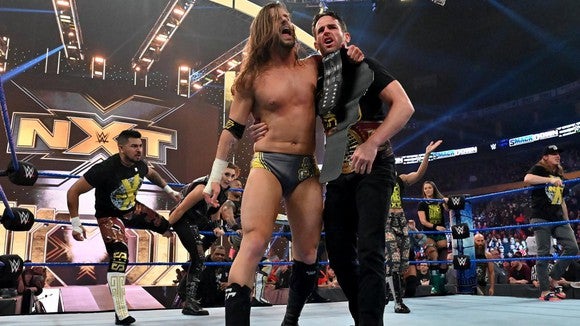 There are still some reasons for optimism

It is not all bad news for WWE. The company's television deals with Fox and Comcast (CMCSA -1.66%) are expected to double its broadcast revenue in 2020. WWE has also experienced frustrating delays in completing a deal with Saudi Arabia to host events, distribute media, and create content for the Middle East and North African regions. On Nov. 4, the company announced a completed deal with Saudi Arabia, which helped improve investor outlook on a topic that was straining relations with talent and testing confidence in the market.

Despite falling share prices, the stock is not cheap

WWE's difficult year makes the stock look expensive based on trailing price-to-earnings (101.4) and EV/EBITDA (31.2), both of which are substantially higher than entertainment industry averages. Even adjusting for the bullish 2020 outlook, WWE's forward price-to-earnings ratio is 21.04, which is comparable to Disney's (DIS -4.00%), and much higher than that of Fox, CBS, Viacom, or AMC. A PEG ratio of 1.95 is similarly higher than a majority of the major content creation stocks. WWE does not even pay a substantial dividend, with a yield of 0.87% being the lowest among dividend stocks in the industry.

WWE has enjoyed expansion through its proprietary streaming platform, which has steadily gained subscribers, now totaling more than 1.58 million, driving its media segment growth year-over-year. While growth is good, the company might be facing a problem if this is the primary avenue for sustainable expansion. First, it is difficult to create incentives for paid subscribers while simultaneously broadcasting so much free content, thereby creating a situation in which segments cannibalize each other.

WWE bulls are betting on a new hero

It is hard to understand how a 50% decline in WWE's share price, coinciding with major revenue expansion announcements for next year, can possibly result in a situation in which the battery of valuation metrics look so pedestrian, or even slightly expensive. As mentioned above, there are stronger dividend payers in the industry.

This bull story for WWE hinges entirely on the company's ability to continue dominating its niche and monetizing new revenue opportunities effectively across the globe. Such a narrative certainly includes execution risk, and skeptics will point to the fact that WWE achieved better television ratings 20 years ago despite the presence of competition. It might wind up being a bet that the company can identify another charismatic superstar who can transcend the business and captivate audiences as in the past. Either way, WWE isn't down and out just yet.