Whether you want to visit cyberspace or outer space, these companies can get you there.

It can be very profitable to find and invest in companies that are upsetting the status quo. One of the co-founders of the Motley Fool, David Gardner, has a name for these types of companies: Rule Breakers. Today, we're going to use his No. 1 criterion and take a look at a first mover in an important emerging industry.

This company is Virgin Galactic ( SPCE 4.51% ), a name that is leading the way in space tourism.

So let's strap in and go for a ride to our space hotel! Or maybe just to Singapore. 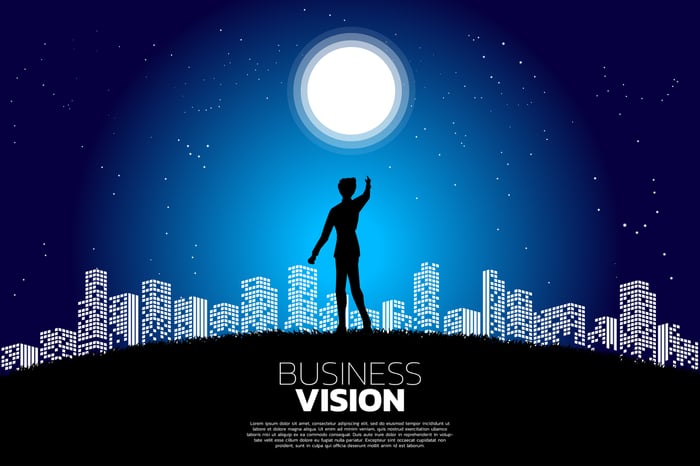 1. Virgin Galactic: Should we invest in space flight?

Several billionaires are investing in space flight, including Jeff Bezos, Elon Musk, and Sir Richard Branson. Musk, the founder of Tesla and the co-founder of PayPal, owns an amazing nonpublic company called SpaceX. The reason Musk is not selling shares of SpaceX to the public is because he wants to go to Mars. And it's not profitable to go to Mars. Shareholders would object and maybe sue him, because right now, going to Mars is a money-losing operation. So SpaceX remains private.

Virgin Galactic, on the other hand, is now public. Is this a money-losing operation? Right now it is, very much so. The stock dropped almost 10% by market close on Nov. 22. It's dropping another 9% on Nov. 25, as I write these words. When a stock drops that far and that fast, don't be in a hurry to jump in. It could get even cheaper.

Entrepreneurs can and do fail all the time. However, Branson is a billionaire entrepreneur, somebody who has started up 60 businesses under his Virgin umbrella. That's an impressive feat, and it tells you a couple of things about the man. One, he is very successful at starting up businesses, and two, he is not running all of his companies. While Elon Musk is the CEO of SpaceX, Sir Richard Branson is not the CEO of Virgin Galactic.

Another major difference is that Branson sees his company as a vehicle for flight by ordinary people. The plan for Virgin Galactic is to be the world's first commercial spaceline -- an airline that goes into outer space.

Why would people want to do that? Virgin Galactic is planning on both space tourism and business travel. The tourists are rich thrill seekers willing to pay $250,000 a pop to do something amazing. And that's just the beginning. The really exciting opportunity is business travel. Virgin Galactic's spaceplanes will shrink the time it takes to get from the U.S. to Japan by 80%. A trip that takes 11 hours today will take 2 hours in a couple of years using high-altitude flight paths.

Investors should expect a bumpy ride, plenty of turbulence, and maybe a crash or two. But make no mistake: The possibility for this company is sky-high.

Sea is a video game company, an internet retailer, and a payments company that operates throughout southeast Asia. It is No. 1 or No. 2 in all of its markets. Right now, Sea targets seven countries: Singapore, Vietnam, Indonesia, Malaysia, Thailand, Taiwan, and the Philippines.

The company does not compete in mainland China. And yet its market opportunity is still huge; 585 million people live in the seven countries where Sea does business. That's a larger population than all of North America. E-commerce in the region is projected to grow from $38.2 billion in 2019 to $153 billion in 2025.

What gives Sea an advantage over its competitors is that it is the dominant entertainment platform in the region. Sea's original game, Free Fire, is a monster hit. And Sea can use its popularity to send people to its retailer websites. And then it can send people to its payment systems.

This networking effect is very helpful to Sea. Its major competitor across the region is Lazada, a division of Alibaba ( BABA 0.19% ). Alibaba is a giant and fearsome competitor, but the massive company has its own weakness: It does not dominate in video games. This leaves Lazada very vulnerable to a company like Sea, which produces its own video games and also has a distribution deal with Tencent.

While Sea's retailing operation, called Shopee, is currently unprofitable, that should change as the company achieves scale. And Sea's internet retailing plans are not as ambitious as Amazon's were in its early days. Amazon carried a lot of inventory and built out warehouses so it could quickly deliver its goods to people. Shopee, on the other hand, is a virtual retailer that connects people with third-party sellers. It's a lighter business model than Amazon has ever had and is actually closer to eBay in that regard.

Sea's most recent quarter showcased phenomenal numbers. The company now has escalating revenue growth, up to almost 200% year over year. Similarly, the stock price is up 195% over the last year. Putting off profitability in order to massively scale revenues is a proven business model, and it's particularly strong in this case because Sea has stronger networking effects than your average internet retailer.

Perhaps the most amazing thing about Sea is that it is starting to compete in other jurisdictions as well, including Latin America and India. There's an international land grab going on among internet platforms, and Sea is right in the middle of it.

My Take: What's Next for Virgin Galactic Investors