Senator Rand Paul wants to help you pay off your student loans. To be clear, Paul isn't funding your loan repayment personally. But he is pushing legislation that allows you to repay student debt with your retirement savings. Paul's proposal is called the Higher Education Loan Payment and Enhanced Retirement (HELPER) Act. A key provision is the ability to withdraw up to $5,250 annually from an IRA or 401(k), without penalty, for student loan repayment.

No help on debt repayment

The HELPER Act's provision to repay student loans from retirement funds isn't likely to gain traction. For one, it's a questionable financial choice to deplete retirement savings for debt repayment. But there is a bigger problem. The provision targets someone who is both overburdened by student debt and carrying high balances in a retirement account. That's an unlikely combination. More common is a borrower who struggles with student loan repayments and, as a result, contributes very little to a 401(k). 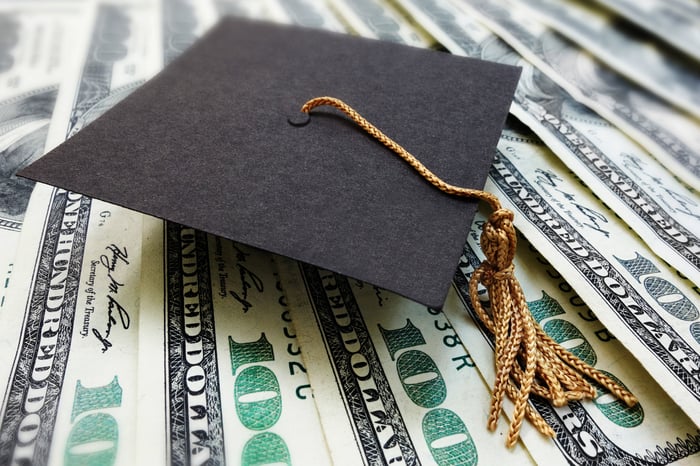 Rand proposes that the HELPER Act would address that issue by encouraging people to contribute more to their 401(k) and IRA plans. And it might. But if they are contributing solely for the purpose of repaying student debt with tax-free money, then what's the point? This proposed legislation turns the retirement plan into a revolving door of tax-free contributions and tax-free withdrawals until the student debt is paid off. In other words, those new "retirement" contributions have nothing at all to do with retirement.

Another drain to retirement savings

Today, you can take tax-free withdrawals from an IRA to pay current college tuition and expenses. If passed, the HELPER Act would also give savers the option to withdraw $5,250 tax-free annually from a 401(k) to cover current college tuition. And that tuition could be for oneself or a spouse or child. Two parents, then, could pull more than $10,000 out of their 401(k) plans annually to cover their kid's college bill.

To put that in perspective, $10,000 earning 7% annually basically doubles its value every 10 years. Leave that money in your account for a decade, and you'll have assets worth $20,000. After 20 years, the balance will be $40,000. That's a lot of retirement earnings power to give up.

The depletion of retirement savings is already a growing problem in the U.S. An analysis from the Government Accountability Office published in 2019 found that savers withdrew more than $29 billion from their 401(k) plans in 2013. These withdrawals consisted of cash-outs from job changes, hardship withdrawals, and unpaid loan balances. Adding tuition expenses as another reason for savers to cash out is a risky proposition.

A retiree with minimal savings becomes wholly dependent on their Social Security benefits. And that's not a great place to be when Social Security is facing a funding shortfall that could reduce benefits as early as 2034.

Two crises by the numbers

The proposed HELPER Act muddles up these two issues and essentially punts financial instability into the future. Yes, student debt may be burdensome. But repaying it shouldn't come at the expense of retirement savings. Those early withdrawals require young savers to give up years of compound earnings. The only way to make up for that is to delay retirement and save much larger amounts in the future.

Encouraging savers to use their retirement accounts for something other than retirement also sets up a dangerous path for legislation. Should we also offer tax-free withdrawals to repay car loans or credit card debt? Or, more obviously, to care for an older generation that has spent its retirement savings?

A better path for legislators

We'd all be better off if lawmakers could focus on the underlying reasons for high default rates on student debt. In theory, a new college degree commands a higher salary, which in turn is used to pay off the debt. But many student borrowers are having a very different experience. Why? They are either not finishing their degrees, choosing not to pay their student debt, or not finding appropriate job opportunities.