Solar energy stocks as a group have been through a number of ups and downs over the past decade, and few of them individually have been winners for investors. Yet since 2009, annual solar installations have risen about 10-fold. In 2019, it's expected that 115 gigawatts (GW) of solar power systems will be installed globally, enough to power 22 million U.S. homes. And that's just this year.

As we look ahead to 2020, there are four solar industry stocks that I think are set up to be winners for long-term investors. And as the sector matures to its next phase of growth, established players with scale should have big advantages over the upstarts that made business difficult for them over the past decade. Yieldcos weren't a great segment of the renewable energy market to invest in during the 2010s, but Brookfield Renewable Partners (NYSE:BEP) was an outlier. The stock returned 350% over the decade when you include dividends. 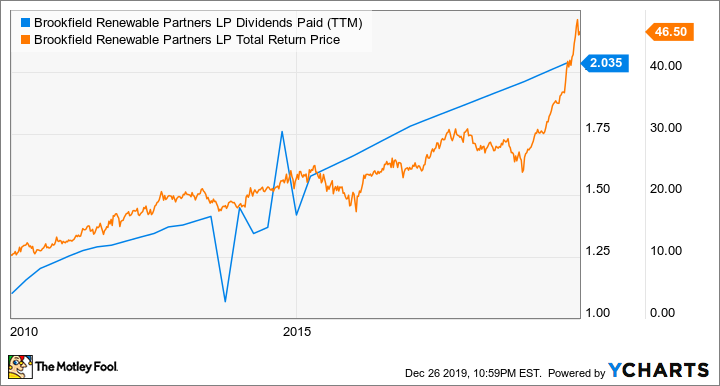 Brookfield Renewable Partners has been so successful because it has the backing of a stable financial company in Brookfield Asset Management, and has been able to grow organically. It owns 5,253 power-generating facilities around the world with a total capacity of 18 GW. With the cash flow from those facilities, it pays a dividend that yields 4.2% at today's stock price, and the company aims to buy enough new projects to grow its dividend by 5% to 9% organically each year.

If you're interested in a solar energy stock with a stable dividend, Brookfield Renewable Partners is a great place to start.

SunPower (NASDAQ:SPWR) has made a big strategic shift over the past two years as it prepares to shift from being a vertically integrated company into two more specialized solar companies. Soon, the company will spin off most of its manufacturing facilities into Maxeon Solar Technologies, leaving itself a residential and commercial (distributed) solar developer.

What I like about SunPower's new strategy is that it will be a large, platform company in distributed solar. The company has an exclusive supply agreement with Maxeon for high-efficiency solar panels in the U.S., which it will pair with custom racking, energy storage, and a software platform for installers to sell to customers. Installers that work with SunPower can also leverage the company's design software, which takes less than 60 seconds to custom design and price a rooftop solar installation.

SunPower is also the No. 1 commercial solar developer in the U.S., a huge market that's been under-exploited thus far. The company has partnered with big retailers like Target, Macy's, and Ikea to install solar, and these power systems are beginning to make more economic sense for customers now that energy storage is being included in about 30% of projects. SunPower is still a risky stock because of the competition in distributed solar, but the company's renewed focus should be good for it in the long term.

The No. 2 residential solar installer in the U.S. is Vivint Solar (NYSE:VSLR), and unlike SunPower, it's the company installing solar panels on customers' roofs. It finances most of its installations through what are known as power purchase agreements or leases, a popular model that allows customers to go solar with $0 down. Customers make monthly payments to Vivint Solar, which finances its installations by selling the tax benefits and cash flows to investors.

The company also retains some of the value of its solar installations, which it conveniently calls "retained value." Management estimates that there's $10.32 per share in retained value on the balance sheet today, up from $7.15 per share two years ago. With the stock trading at $7.80 per share as I'm writing, this is a value stock even if no future value is added to the company's balance sheet.

No company has been as successful in this industry as First Solar (NASDAQ:FSLR). It produces thin-film solar panels that are primarily used in utility-scale solar projects. After vertically integrating, much like First Solar, a decade ago, the company is now focused almost entirely on manufacturing, and only does a small amount of utility-scale solar development. It has been profitable for most of the decade, outside of the last couple of years when it was investing in next-generation manufacturing technology for its Series 6 photovoltaic modules. 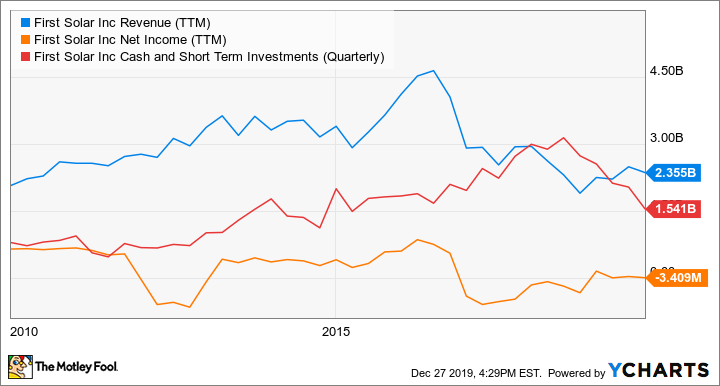 First Solar isn't a spectacular company, but it has built the best balance sheet in the solar industry, which is its defense against upstarts. Every time a new technology or company seems poised to break into First Solar's primary markets, it's able to fend them off. I don't have any reason to think that won't continue, which is why I view it as a top renewable energy stock to buy in January.

Solar energy could have a big decade

Solar companies have spent the last decade sorting out their business models and staking their claims to various segments of the market. I think the 2020s will see a more sustainable industry emerge in which a handful of big players will generate a majority of the value for shareholders. These four stocks are my best bets in that sustainable industry.