The coffee shop chain’s late-year stumble removed some of the sheen from a great year, but there are signs that the surge could continue into next year.

Starbucks (SBUX 1.72%) operates the largest chain of coffee shops in the world with 31,000 locations, most of which are company-owned. The restaurant stock produced a stellar twelve months for shareholders in 2018, rising from $49 in July 2018 to $99 in July 2019. This momentum was unsustainable, and the stock dropped nearly 20% from its all-time high, but some strength in December has driven shares up to $87 -- poised to close the year up 35%.

Starbucks delivered 7% revenue growth in fiscal 2019, driven primarily by 5% comparable sales growth from existing locations. This performance was impressive because the company was able to approach prior levels of growth despite pulling back on new store openings. Starbucks experienced a 63-basis-point reduction in operating margin from the prior year, primarily attributable to non-recurring expenses related to corporate restructuring and streamlining efforts.

Analysts are expecting 8% revenue growth in 2020, with more than 10% earnings growth, which suggests that the market is anticipating sustained high repurchase activity or margin improvement. The chain is forecasting 3% to 4% comparable sales growth and 2,000 new store openings in 2020, and investors are bullish about the opportunity to expand in the Chinese market. 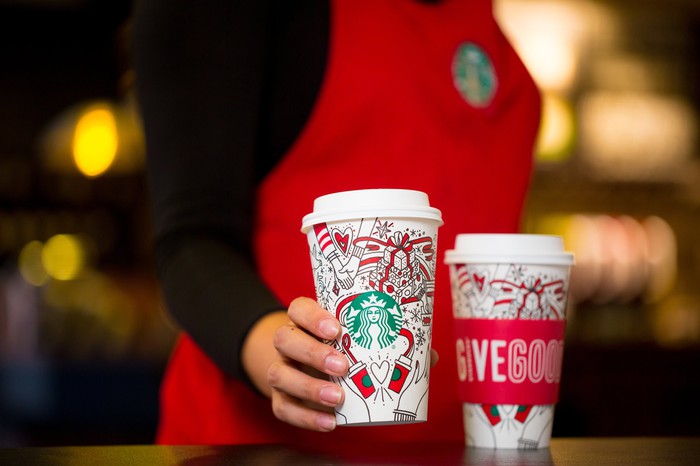 The stock trades at a 28.7 forward price-to-earnings ratio, which is nearly double the restaurant industry average and substantially higher than rival Dunkin Brands' (DNKN) 23.2. Starbucks has a similar premium based on price-to-free cash flow and EV/EBITDA, though it is slightly cheaper than Dunkin by the latter metric. Starbucks bulls point to the company's superior growth outlook compared to peers such as Dunkin and McDonald's to justify the premium, but the 10.5% forward growth rate is not exceptionally high among restaurants and eateries in general. The stock's 2.7 price-to-earnings-growth (PEG) ratio is high, indicating that growth alone is not sufficient to explain the price premium.

Starbucks pays a 1.9% forward dividend yield for shareholders, which is a nice opportunity to deliver returns independent of market conditions, but is ultimately pedestrian compared to other restaurants and eateries. The company's 9.5% buyback yield in 2019 helped drive price appreciation for investors, though this marked an increase from prior years that is unlikely to be sustained. Nonetheless, Starbucks has averaged 4.3% buyback yield over the past five years, so investors should expect to receive some meaningful price support from repurchasing.

The company's dip in operating margin might cause concerns that pricing power is declining or that sales mix is trending unfavorably. These are definitely metrics to monitor, because even the adjusted margin for 2019 was multiple percentage points lower than the 18.1% figure delivered in 2016. While this trend might not be the most enticing element of the story, the company's margins are still more than triple the restaurant industry average. This is even more impressive, considering that peers like Dunkin that operate primarily through a franchise model are generally able to achieve higher margins due to the nature of their business. Starbucks' 37.4% return on invested capital is excellent, indicating efficient use of financial resources to generate returns for shareholders. Therefore, it would seem that management's operational stewardship is notably strong.

Investors also have little reason to feel concerned about financial health. Starbucks carries just over $11 billion in total debt and negative shareholder equity, which could be a concern if there is a long-term decline in operating performance. But the company is currently in a strong position to meet any obligations, with a 0.92 current ratio, 1.79 debt-to-EBITDA ratio, and 11.8 interest coverage ratio. Things really have to deteriorate for financial health to become a problem for Starbucks, and the lower floor associated with negative net equity would only be on the table after a precipitous fall caused by declining fundamentals.

Starbucks runs a nice business with a strong global brand, and it seems likely that the company will continue to enjoy above-average growth. However, the flaw in the bull narrative is connected to valuations that might not be sustainable or may not leave enough room to the upside. The valuation metrics are not wildly high by any means, but they are on the higher end of reasonable compared to peers. That means that further outperformance is likely to require fundamental support, and any failure to meet growth or profitability expectations could catalyze a decline.

Continuation of the margin compression trend could be a problem -- pricing-power erosion amid difficult global economic conditions could be an issue for a brand that commands premium pricing compared to substitutes. The annualization of 2018's public relations nightmares will also make it harder to sustain the growth rate next year. There might be a better time to get into this story at a cheaper point.