A new report says hydroelectric asset valuations are likely to increase as a result of rising clean energy demand. Duke Energy (NYSE:DUK) and Brookfield Renewable Partners (NYSE:BEP) own significant portfolios of hydro assets, so it's time for a look at whether the trend could improve the bottom line for each company.

Why demand for hydro is increasing

Hydropower is one of the oldest sources of energy. Most U.S. hydroelectricity is produced by large dams on major rivers that were built before the mid-1970s. And barriers to entry for hydropower projects are much higher than other renewables based on the capital intensive nature of building projects as well as the limited number of water sources.

Despite a limited pipeline of new hydroelectric projects starting up, states including Oregon, Washington, and California recently enacted legislation requiring a percentage of utility generation to be done under contract with hydro resources.

Many states have similar mandates for power to be produced from wind or solar resources, but hydro is different because the projects cannot be quickly built where they are needed. So ownership of projects using this resource can help a power producer stand out from competitors in the clean energy space. According to a recent report from the ratings agency Moody's, "the value ascribed to hydro generation is likely to increase globally as the market places a premium on the value of the asset."

"As governments limit carbon emissions and demand for sustainable energy sources grows, investors are increasingly placing a premium on noncarbon-emitting resources, which is driving the value of hydroelectric power generation higher," the report said. 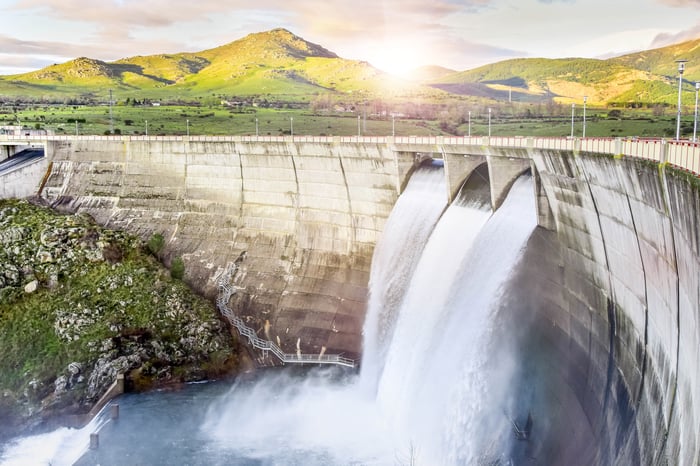 Duke Energy may benefit from sell-offs

Duke Energy owns and operates a portfolio of 25 hydroelectric power assets in the Carolinas and Tennessee with a total capacity of more than 1.3 GW. While the portfolio is significant, it hasn't figured into the company's recent statements regarding its strategic focus. Duke made no mention of its hydro assets on its most recent earnings conference call, and the company showed in recent months it has no problem selling off these assets.

In 2018, the company agreed to sell a portfolio of hydro assets at a loss, saying that they were costly to maintain and that the sale would produce savings for customers over time.

For Q3, Duke saw improved earnings per share and revenue, and increased its full-year guidance, positive developments that it said were linked to investments the company made into its electric and gas utilities. The company may see the increased value of its hydro assets as an opportunity to sell the projects, particularly as the company prioritizes investments in renewables that may better complement its utility operations, such as battery storage.

Over 75% of Brookfield Renewable's total generation comes from hydropower facilities on 81 river systems in Canada, the United States, Brazil, and Colombia. The company's massive portfolio has a capacity of approximately 7.9 GW, including a portion that is sold on a merchant basis in the wholesale power markets. The portfolio generated funds from operations of $125 million for Q3, up from $105 million during the same period in the prior year.

CFO Wyatt Hartley said on the most recent earnings conference call that the company has been making moves to "continue to advance initiatives to extract additional value from our hydroelectric portfolio," and the new state mandates for hydro may enable the company to sign contracts at a higher price than would have been possible in the past, leading to higher revenue long term.

Increasing hydro prices will fit nicely with Brookfield's strategy of opportunistic capital recycling, in which it sells assets it has designated to be mature or non-core in order to buy new assets at a discount. This was seen when the company sold off mature hydro assets and used proceeds to acquire a large portfolio of hydro assets in Columbia in 2016.  So if the company sees higher return possibilities elsewhere, it might make sense to sell assets that are commanding higher prices and put that money into acquisitions.

Are these stocks worth considering?

Investors looking for a new renewable energy stock would be wise to keep an eye on both Duke Energy and Brookfield Renewable Partners, though Brookfield may be the better buy. It has a higher yield and lower total debt-to-capital ratio and has outperformed the S&P 500 by roughly 60 percentage points over the past year, versus Duke's 10 percentage point market beat.

On the other hand, the companies have different corporate structures and missions, so an apples-to-apples comparison would not be fair. Brookfield is a pure renewable power developer that has been around for less than 10 years but benefits from having a parent company that has been operating since 1899, Brookfield Asset Management.    Duke has been operating for more than 100 years, and its utility component offers the investor diversity from revenue streams associated with renewable power.

Both companies stand to benefit from increased hydroelectric power demand and higher valuation for these assets, but the way the positive trend plays out for each remains to be seen.