Please ensure Javascript is enabled for purposes of website accessibility
Log In Help Join The Motley Fool
Free Article Join Over 1 Million Premium Members And Get More In-Depth Stock Guidance and Research
By Keith Noonan - Jan 28, 2020 at 8:08AM

A well-constructed dividend portfolio can help pave the way to greater financial flexibility in retirement and help you enjoy your later years in style. Many retirees rely on dividend-paying stocks for extra income, but not every stock that offers a substantial yield will wind up pulling its weight in a retirement portfolio.

Retirees have to strike a balance among stocks that offer big enough yields to create a meaningful stream of income, trade at valuations that protect the principal of the investment, and have business strengths that will allow them to navigate some twists and turns and keep the dividends flowing. For investors seeking big, dependable dividends, these three stocks offer yields north of 5% and are backed by sturdy businesses that should power long-term performance. 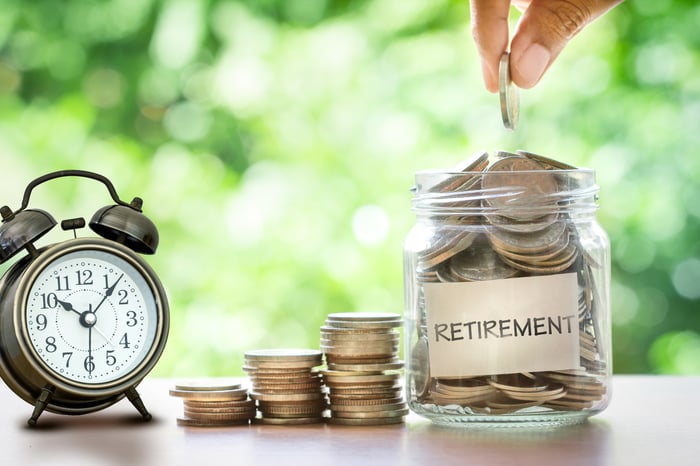 ExxonMobil (XOM 1.98%) has a top position in the oil and gas industry that's unlikely to be disrupted, along with underappreciated growth prospects and a great dividend. The company has returned a whopping $14.44 billion to shareholders through dividends over the trailing 12-month period, which is second only to AT&T in terms of the total amount of dividends paid across the period.

Exxon's roughly 98% payout ratio might look concerning, but the company has been in the midst of a big spending push that has elevated expenses and pressured earnings. It is investing in new drilling and production operations that are projected to boost its 2025 earnings roughly 140% over 2017 levels (assuming an oil price of $60 per barrel). But the market has been tepid on the stock because this big investment to increase production is taking place when oil prices are already relatively low.

The market's hesitance to embrace the production push has resulted in the stock trading at an opportune valuation, sporting a fantastic dividend yield. Even if renewable energy technologies see significant advances, expansion for the global population and economy will mean increased fossil-fuel demand for the foreseeable future, and retirees are getting a great dividend and a sturdy business with Exxon.

AT&T's (T 1.84%) dividend growth has been slow over the last decade, but the company already offers a great yield, and it's generating plenty of cash flow to fund its distribution. The company's mobile wireless business is sturdy and poised to benefit from 5G tailwinds, its Time Warner has a runway for growth amid growing global demand for entertainment content, and its DirecTV satellite television subsidiary is still generating substantial free cash flow (even though it's losing subscribers due to cord-cutting).

Acquiring DirecTV and Time Warner left AT&T with a big debt load, and it seems clear that the company overpaid for the former, but it's making progress paying down the debt while still investing in the business. The company is on track to generate $28 billion in free cash flow this year and reduce its debt from $166 billion to $146 billion. It has returned $14.8 billion in dividends to shareholders over the trailing 12-month period.

The chances of mobile internet service seeing reduced demand are very slim. And AT&T's large existing subscriber base and network infrastructure put it in position to bridge subscribers over to faster 5G network service and new subscription packages for wearables, smart cars, and other Internet of Things (IoT) devices. The company will also have an opportunity to provide 5G services for enterprises and their IoT applications and cloud-computing needs. With a strong dividend and tailwinds on the horizon for its mobile wireless business, AT&T stands out as a great retirement stock.

AbbVie (ABBV 1.93%) has a great yield and looks ideally suited for a retirement portfolio. While the S&P 500 index climbed nearly 29% in 2019, AbbVie stock dipped roughly 4%, with the sell-off stemming from declining sales for its Humira arthritis drug in Europe and other international markets. The biopharmaceutical company's shares now trade at roughly 8.5 times this year's expected earnings and look attractively valued for retirees seeking high yield stocks.

Humira is still the world's top-selling drug by revenue, but the launch of biosimilars have tamped down sales outside the U.S. (where the drug is still protected thanks to patents on its manufacturing and formulation), and protections on its marquee product will start to slip in 2023. Increasing competition for the drug prompted the company to make a $63 billion bid to acquire pharmaceutical company Allergan, which is mostly known for its Botox.

While the market balked at the price of the Allergan acquisition, the deal will significantly boost AbbVie's cash flow and put it in even better position to continue delivering substantial payout growth over the next decade and beyond. Humira sales will likely continue to be pressured by competition, but the company has received 14 new-product and major-treatment approvals over the last five years, and it has other new treatments in the pipeline that should strengthen the business. The company has also been delivering stellar payout growth over the last decade, and that trend looks poised to continue.