Please ensure Javascript is enabled for purposes of website accessibility
Log In Help Join The Motley Fool
Free Article Join Over 1 Million Premium Members And Get More In-Depth Stock Guidance and Research
By Anders Bylund - Updated Jan 29, 2020 at 7:41AM

There are no losers in this face-off, but you'll still see a crystal-clear winner.

Being two of the five illustrious FAANG stocks, it's not unusual to weigh the investing worth of video-streaming veteran Netflix (NFLX 5.03%) against Google parent Alphabet (GOOG 5.20%) (GOOGL 5.11%).

When I paired up these two stocks in October, I recommended owning both, but really leaning into Netflix in the short term. Both stocks have roughly doubled the 10% returns of the S&P 500 since then, but Netflix traced a much rockier path to the same destination. So what changed over the last three months? Let's have a look. 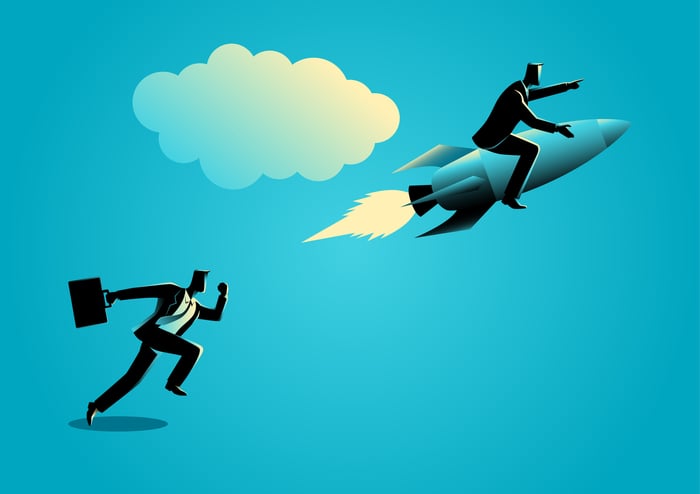 A is for Alphabet

Alphabet launched a buyout offer for wearable computing veteran Fitbit (FIT) at the end of October. The $2.1 billion acquisition could breathe new life into Alphabet's struggling Google Wear products, but regulators quickly started a detailed review of how the proposed deal might give Google access to excessive amounts of personal data. I'm not terribly concerned about that particular issue because Apple (AAPL 2.45%) remains the heavyweight to beat in the wearable space thanks to its phenomenally successful Apple Watch product line.

Other than that wrinkle, the company enjoyed relatively smooth sailing over the last few months. It is scheduled to report fourth-quarter results next Monday, showing the same roughly 20% pace of year-over-year revenue growth as usual. In general, Alphabet is behaving like the industry giant it is, sporting a trillion-dollar market cap and $155 billion in trailing revenue. This juggernaut will breeze through the upcoming report as always, barely moving on the news and allowing us investors to sleep soundly for another three months. Alphabet is about as blue chip as a stock can be, just as it was three months ago.

N is for Netflix

In November, Netflix saw former content partner Walt Disney (DIS 3.69%) launch its own video-streaming service. There was much rejoicing for Disney owners at first, as Disney+ amassed more than 10 million subscribers in its first day. Netflix bears saw one of their main talking points working out exactly as planned, and the stock took a 7% haircut that week.

But something funny happened on the way to Netflix's imminent demise. The company's original content proved its mettle by dominating the Golden Globes and nabbing 24 Oscar nominations. Sword-and-sorcery series The Witcher premiered in December to broad acclaim and strong viewership figures. And when Netflix reported fourth-quarter earnings last week, it turned out that Disney+ hadn't stolen millions of subscribers from the leading digital video service after all. The company added 8.8 million new accounts in the fourth quarter, including a half-million in North America.

The streaming media market seems to be elastic enough to accept another big-name competitor without gutting the membership figures of established players like Netflix and Hulu. Disney+ will probably grow into an industry titan in its own right, but Netflix should still hold on to its early mover advantage on a global scale.

You can't really go wrong, but the winner is obvious

In other words, not much has changed. Both of these companies are great businesses and valuable investments, but they appeal to different investor profiles. Alphabet is still a rock-steady blue chip that should suit the needs of a traditional value investor, while Netflix didn't lose its long-term growth promise in the face of increased competition.

So it's kind of like picking your favorite brand of Swiss milk chocolate -- it's all fantastic -- but the choice is still clear. I'm holding on to my Alphabet shares for the long haul, but Netflix is an unbeatable buy right now.