Shares of Teekay (NYSE:TK), Teekay LNG Partners (NYSE:TGP), and Teekay Tankers (NYSE:TNK) all rallied more than 10% by market close on Thursday. Fueling the rally in these related oil and gas marine shipping stocks was their fourth-quarter results.

Teekay returned to profitability during the fourth quarter as it generated $31 million, or $0.31 per share, of consolidated adjusted net income. Meanwhile, its total adjusted EBITDA soared 53% to $113 million. 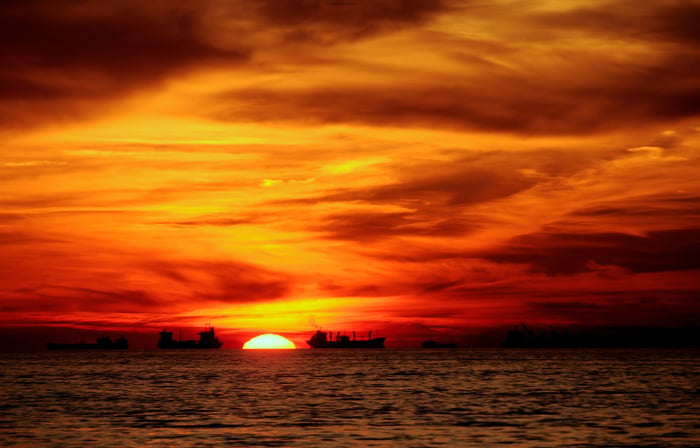 The company benefited from its ownership stake in Teekay LNG Partners and Teekay Tankers, which both reported higher fourth-quarter results. Teekay Tankers produced record quarterly adjusted net income fueled by higher average tanker rates during the period thanks to strong market conditions. Meanwhile, Teekay LNG benefited from the delivery of several new ships during the past year as well as higher revenue on some of its existing vessels.

Both affiliates also reported excellent progress on their strategic priorities. Teekay Tankers was able to opportunistically sell several vessels for $104 million during the quarter. Those sales have helped the company reduce its debt by 15% since the end of the third quarter.

Teekay LNG Partners, meanwhile, completed all of its growth projects during the quarter, which included taking delivery of two more LNG carriers and finishing a regasification terminal in Bahrain. With its capital spending program complete, the company announced a 32% increase in its dividend.

Teekay and its affiliates benefited from strong market conditions during the fourth quarter, which enabled all three entities to produce improved results. The group also finished up their expansion program, which should help drive further improvements in profitability. Because of that, shares of these shipping stocks could continue rising as they reap the benefits from those expansion-related investments.