Please ensure Javascript is enabled for purposes of website accessibility
Log In Help Join The Motley Fool
Free Article Join Over 1 Million Premium Members And Get More In-Depth Stock Guidance and Research
By Daniel Foelber - Mar 13, 2020 at 5:23AM

On Monday, oil prices suffered their worst fall since 1991, sinking to just above $30 per barrel. Meanwhile, natural gas prices didn't move much at all. This likely was based on hopes that less drilling would mean less associated gas, and therefore, less natural gas supply. Still, natural gas prices are sitting at a four-year low and are within striking distance of a 20-year low.

For bold investors who believe a rebound in energy stocks could be in store, now is a reasonable time to compare two Houston-based pipeline and infrastructure giants, Kinder Morgan (KMI 1.48%) and Plains All American Pipeline (PAA 3.44%). 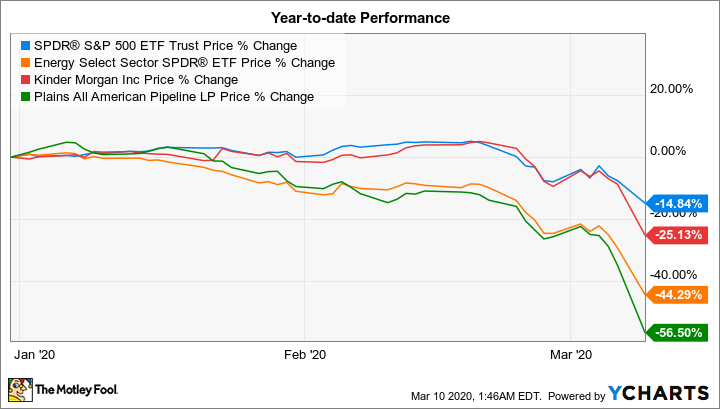 To counteract volatile commodity prices, Kinder Morgan has built a strategy of generating revenue from predictable fee-based or regulated customers. According to Kinder Morgan's March 4, 2020 investor-day presentation, 91% of cash flow comes from take-or-pay or fee-based sources, which means that Kinder Morgan can remain somewhat insulated from volatility in the short term. However, lower commodity prices make it difficult to renew or rewrite new contracts. Kinder Morgan is far from immune to commodity price fluctuations over the long term.

In many ways, Kinder Morgan's future depends on the global growth and relevance of natural gas. It also depends on drilling efforts around the Permian Basin, the United States' largest oilfield, because Kinder Morgan is investing heavily in infrastructure projects that rely on the gas that's associated with Permian drilling.

Kinder Morgan justified its plans for three main Permian pipeline projects based on the need for companies to profit from associated gas instead of wasting it and harming the environment by burning it off, also known as flaring. According to Kinder Morgan, 83% of forecasted natural gas demand growth between 2019 and 2030 is expected to come from the Gulf Coast. Most of this will come from neighboring shale plays, for export in the form of liquefied natural gas (LNG). This once-grand plan is looking more and more like a pipe dream in the present environment.

Plains All American is focusing on free cash flow (FCF) and divestments to strengthen its balance sheet. The company had a strong 2019 performance, surpassing 2018 in most metrics. Plains All American did a good job divesting, as well, generating $200 million in 2019 and targeting an additional $600 million in 2020. That being said, 4Q 2019 numbers were generally below 4Q 2018.

Plains has done an excellent job raising its fee-based adjusted earnings before interest, taxes, depreciation, and amortization (EBITDA), which was around $2.43 billion, or 75% out of a total 2019 EBITDA of $3.24 billion. The company has also done a stable job lowering its capital commitments, which are set to begin decreasing in 2021, coinciding with fee-based project growth that's expected to kick off during 2021, as well. Part of that capital alleviation is the completion of the company's Cactus II pipeline from the Permian Basin to Corpus Christi, Texas, along the Gulf Coast. Cactus II was completed in 3Q 2019.

Unfortunately, Plains All American finds itself in a similar situation to Kinder Morgan, in that much of its investments are related to the Permian Basin, where oil and gas volumes could decline. Plains also has significant pipelines coming online between 2020 and 2021 that run through Oklahoma's resource-rich SCOOP and STACK regions, as well as Colorado's DJ Basin. These regions are shale plays like the Permian Basin and subject to the same potential volume declines. 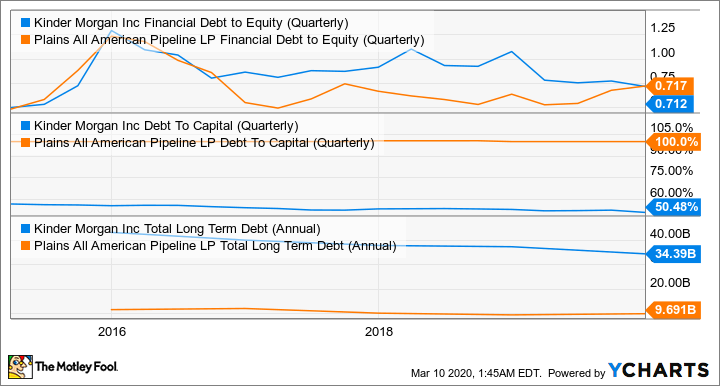 From a balance-sheet comparison, Kinder Morgan and Plains are about equal when it comes to debt to equity, but Kinder Morgan has a 50% debt-to-capital ratio compared to Plains' 100%, signaling that Kinder Morgan is more solvent and less dependent on debt than Plains. From a market-capitalization (market cap) perspective, Kinder Morgan is seven times the size of Plains but has only around four times the debt. After the recent sell-off, Plains' total net long-term debt of $9.69 billion well exceeds the company's market cap of $5.71 billion. 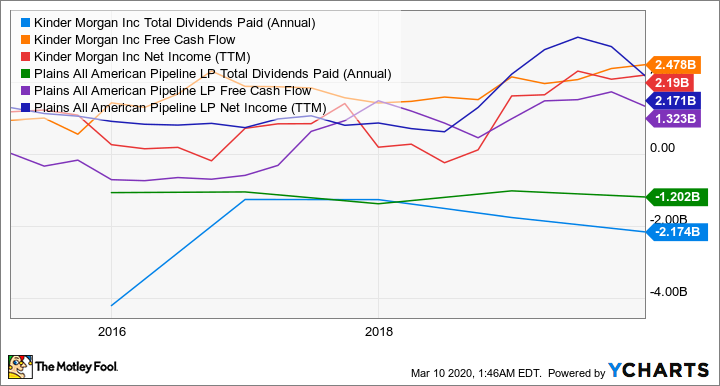 As stock prices fall and dividend payouts remain the same, yields rise. Assuming neither company lowers its dividend, Plains yields 11% and Kinder Morgan yields 5%. These are attractive options for income investors, but both companies have FCF that's right around total dividends and are dangerously close to relying on debt to pay their dividends.

Given that FCF was just above both companies' dividend obligations in 2019, 2020 may offer a difficult choice between divestment, decreasing the dividend, or decreasing investments in new projects. Either way, investors should consider the vulnerability of each company's dividend.

Thanks to its consistent reliance on predictable cash flow, slightly better balance sheet, and greater exposure to gas rather than crude oil and liquids, Kinder Morgan is a better buy than Plains All American. It's rather unfortunate for Plains, considering that the company was riding steady until summer 2019.

Like many companies, Plains had a good plan based on stable commodity prices, but it's just one of many that relies on oil and gas from the shale plays, and it will be tested to its limit in the coming months.