When the markets are turbulent, make sure you're current with the definitions of these financial terms.

When financial markets experience turbulence, Wall Street employs a jargon all its own to describe important elements of tough, uncertain times. Here's a look at some of the most common terms and what they mean.

Bear market: When a stock or bond index, or a commodity's price falls and keeps falling, it is considered to be in a bear market. Often a decline of 20 percent or more in a stock index is said to meet the threshold of a bear market. The term is often used in contrast with "bull market," which refers to a large increase in prices. The longest bear market in U.S. history occurred during the Great Depression, during which time the Dow Industrial Average fell for four consecutive years.

Bubble: When prices -- be they stock, housing or other asset prices -- rise to levels that appear inexplicably high, that's known as a bubble. Inevitably, a bubble pops and prices fall down to earth. Perhaps the most infamous bubble in recent U.S. history was the real estate bubble that played a major role in the 2008 financial crisis. 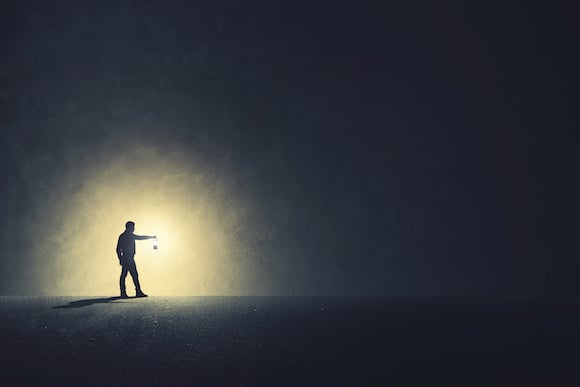 Correction: A correction is when stocks, bonds, commodities or indices reverse course by at least 10 percent, before resuming their previous upward or downward trend. Though a correction can technically describe a 10 percent bump or drop, usually it's used in reference to the latter. In August 2015, a number of indices saw corrections, including the S&P 500, which dropped from about 2,100 to below 1,870 in less than two weeks before trending upward again.

Dead cat bounce: Perhaps the most grisly term in Wall Street's lexicon, a dead cat bounce refers to the temporary spike in the price of a stock after a major decline. The phrase originates "from the facetious notion that even a dead cat would bounce slightly if dropped from a sufficient height," according to Merriam-Webster.

Hedge: In investing, to hedge refers to the act of making investments intended to offset possible losses -- in other words, to mitigate risk. If, for instance, a shareholder in Company X is concerned that its share price might fall, he may hedge by buying what's known as a put option -- a contract that allows an investor to sell a certain number of shares in the company at a certain price by a set date. The option would help the investor avoid at least some losses if Company X's share price does, in fact, decline.

Limit Up/Limit Down: In 2012, the Securities and Exchange Commission approved regulatory changes to address extraordinary market volatility. Specifically, the limit up/limit down requirements, often called LULD, ensures that stocks don't trade outside of particular price parameters by establishing a highest and lowest permissible price for each stock trade. The price parameters are determined by allowing a certain percentage leeway above and below a set reference price. The reference price generally is the average of the price of the trades that took place within the last five minutes (on a rolling basis).

Liquidity: Markets are said to have liquidity when their participants are able to quickly buy and sell securities without significantly affecting the prices of those securities. Liquidity declines when it becomes more difficult to trade an investment due to an imbalance in the number of buyers and sellers, or because of price volatility. A security that cannot be bought or sold without a major change in price may be described as illiquid.

Margin call: Some investors might use a margin account, which can allow investors to borrow money from a broker to purchase securities. These investor loans are collateralized by either the securities they've purchased or by cash. But if the prices of the securities fall by more than a certain amount -- which can happen in bear markets or during corrections -- brokers may issue a margin call requiring clients to deposit additional cash or securities as collateral for their loans. If you fail to meet the margin call requirements, the firm can force the sale of those securities or other securities in your account—sometimes without notice.

Marketwide circuit breaker: When the general stock market drops precipitously, a marketwide circuit breaker may be triggered. If the S&P 500 falls either 7 percent or 13 percent from its closing price the previous day before 3:25 p.m., trading gets shut down across all stock and future exchanges. A drop of that size after 3:25 p.m. would not trigger a trading halt. If the S&P 500 drops 20 percent or more from its previous closing price, trading shuts down for the rest of the day.

Overbought/oversold: When the price of a stock jumps, someone who believes that it is due for a correction might argue that the stock is "overbought." When a stock or many stocks in a market decline steeply and suddenly, some might speculate that stock or the market is due for a rebound. When making such a prediction, one would say the stock or market is "oversold."

Panic selling: When investors suddenly conclude that a security or market is doomed to a rapid price decline, they might engage in panic selling, offloading massive amounts of shares without necessarily doing thoughtful analysis to determine whether selling is the wisest move. When investors engage in panic selling, the result may be a self-fulfilling prophecy: The widespread sale of a stock does usually lead to a decline in price. Panic selling is often associated with market crashes, notably the crash that kicked off The Great Depression in 1929, and 1987's infamous one-day crash known as Black Monday.

Risk-on/risk-off: In investing, certain assets, such as stocks, are considered to carry more risk than others, such as gold. During periods of market turmoil, some investors may adopt a "risk-off" strategy, meaning they sell their riskier assets to buy less risky ones. Under a "risk-on" strategy, the converse is true: investors buy riskier assets while selling less risky ones. For example, when investors feel the market is strong and rising, they might perceive less risk about the market and its outlook, creating a risk-on environment. Alternatively, market factors that indicate a market downturn and increased risk may bring about a risk-off environment.

Safe haven: The term safe haven may make grammarians cringe -- a haven, after all, is by definition a safe place, and so "safe haven" is redundant -- but that hasn't stopped brokers and investors from employing the term, especially when markets go south. Investments are described as safe havens when it's commonly believed they won't lose value in the face of market turmoil, or, in other words, the investments some might turn to when pursuing a "risk off" strategy. Exactly what types of securities and other investments are considered as safe havens can vary over time -- past examples have included U.S. Treasury bonds, the Japanese yen and gold. But sometimes experts disagree as to whether a certain investment should be considered a safe haven or not. Ultimately, it's important for investors to remember that no investment is guaranteed to be "safe."

Sell-off: On Wall Street, when the going gets tough, many start selling. A sell-off describes what happens when, following a major decline in the prices of stocks, bonds, or other securities, market participants collectively sell massive quantities of those falling securities as each participant seeks to prevent losses from future price declines.

Volatility: When a security, a commodity or an index fluctuates wildly in a short period of time, they're experiencing volatility. The Chicago Board Options Exchange's Volatility Index (VIX) measures the expected volatility of U.S. stocks by gauging investors' expectations of major market moves. Financial market regulations include certain buffers to limit volatility. Read more about volatility here.