It's official. Four of the five biggest names in the United States' cable television business started 2020 out as badly as they finished 2019. The fifth one is apt to report the same with its quarterly numbers due later this month. In simplest terms, they're losing paying customers.

That's nothing new, of course. The cord-cutting movement has been well underway since 2015, when streaming became a viable alternative and cable become relatively unaffordable for many American households. But cable cancellations seem to be accelerating in an environment where the vast majority of prospective cord-cutting is still ahead rather than behind. Two charts say all that needs to be said. 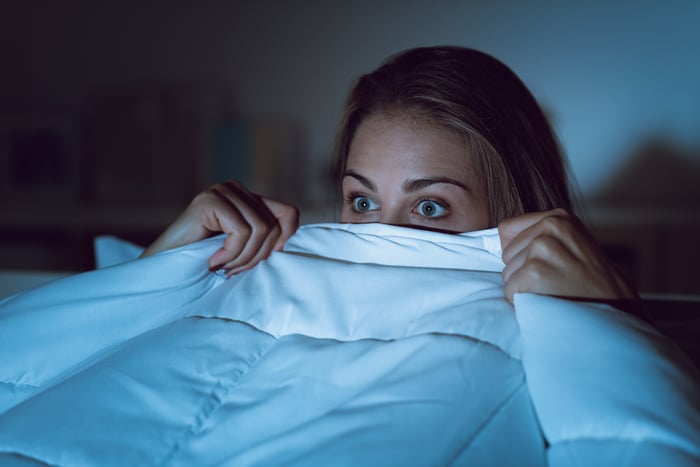 An avalanche of cancellations

Last quarter, four of the top five U.S. pay-TV providers failed to add customers to their cable ranks. It's unlikely the fifth fared any better either, given its history -- a misstep made even more amazing by the fact that most of us were trapped at home for the better part of March, looking for ways to fill the time. Streaming was one way we did so. But the lockdown failed to curb the outgoing tide of paying cable customers, and perhaps accelerated it.

That's not the most alarming aspect of cable television's first quarter, however. Far more concerning is how, in an environment where it arguably should have at least slowed, the long trend of pay-TV losses remains unfettered. When factoring together all of their conventional cable products, not one single cable provider has been able to attract another provider's lost customers at any point in the past three years. 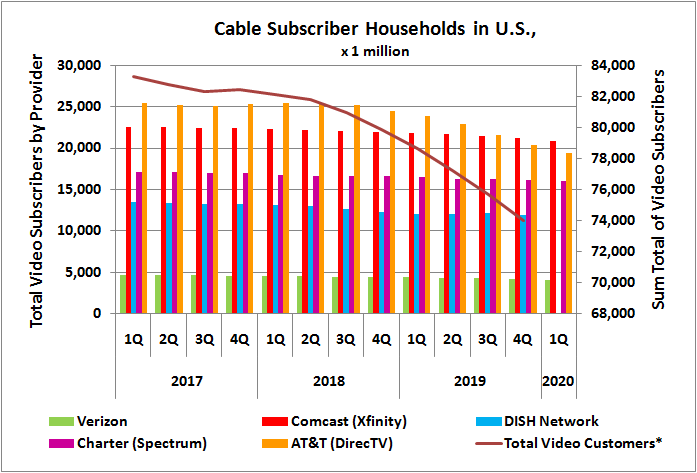 Data source: Company quarterly and annual reports. Chart by author. Note: Total cable TV subscribers is the sum of these top five service providers only, though they account for the majority of the industry's revenue in the U.S.

The big takeaway: This isn't about a lackluster cable service provider, or two. Consumers are saying goodbye to the entire cable television industry, and to an entire business model. 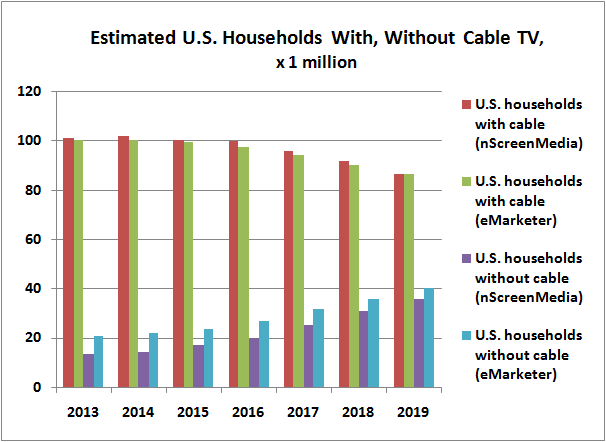 Data source: nScreenMedia and eMarketer. Chart by author. 2019 data based on estimates made before the end of 2019.

It's troubling for one clear reason. Despite the damage already done by the cord-cutting movement, most households are still paying for cable television. That leaves a massive amount of room for the industry to keep losing cable TV subscribers, and by extension, keep losing revenue.

And it could get worse much faster.

Underscoring the prospective pitfall is a recent survey from advertising technology outfit The Trade Desk, indicating 64% of U.S. households are losing interest in cable if they haven't cut the cord already. There's a small but important nuance buried within the survey's results too. Among people aged 55 or older -- consumers who helped build cable TV empires -- 56% of them are or soon expect to be cord-cutters. The measure becomes more concerning as one looks further down The Trade Desk survey's demographic data. For those between the ages of 18 and 34, 74% don't see themselves becoming or remaining traditional pay-TV customers.

It matters more than investors may fully appreciate. At the risk of sounding grim, the 55-and-up cohort are much nearer the end of their lives than the 34-and-under crowd is. The cable industry's most compelling prospects are quickly becoming a very small sliver of the total addressable market. Where the pay-TV/no-pay-TV equilibrium lies is difficult to say. But, given the pace of cable subscriber losses, it doesn't feel close.

Difficult, but not impossible

All is not necessarily lost. Most cable TV service providers continue to add to their broadband customer bases, offsetting what they're losing on the cable television front. Some of these companies are even adding high-speed internet customers at a rate faster than they're losing cable subscribers. As an example, Comcast lost 409,000 video subscribers last quarter but added 477,000 broadband users. About 20% of Comcast's revenue is generated by its high-speed internet business, and more than one-third of Charter's top line comes from broadband customers.

Investors, however, would still be wise to start taking closer looks at how -- or even if -- their telco names are going to be able to offset the accelerating loss of most of their cable business.

Some -- like AT&T -- are. While it remains to be seen just how effective it may be, the impending launch of its streaming service HBO Max is going to be leveraged in a way that attracts and keeps customers for its other services like wireless, and even cable television customers. Others aren't as well-positioned, though. Verizon, for example, doesn't have a studio or a home-grown on-demand video service it can use to make its wireless and cable services stickier, so to speak. That's going to matter even more in the future than it does now, as the cable market's core customer base continues to age.