Please ensure Javascript is enabled for purposes of website accessibility
Log In Help Join The Motley Fool
Free Article Join Over 1 Million Premium Members And Get More In-Depth Stock Guidance and Research
By James Brumley - Jun 4, 2020 at 10:52AM

The cinema chain can do little to alter its fate now.

In an announcement that didn't surprise anyone, AMC Entertainment Holdings (AMC 2.48%) -- you know it better as AMC Theatres or its Carmike Cinemas arm -- injected the always alarming "substantial doubt exists about our ability to continue as a going concern" language into Wednesday's preliminary first-quarter earnings report. Coronavirus-driven shutdowns have made an already difficult situation for the movie theater industry even worse, and it remains unclear when things might return to normal for the film business.

The matter isn't all that complicated, though. Either movie theaters will quickly convince moviegoers that it's safe to return once lockdowns (and now nationwide protests) end, or the media, politicians, and streaming platforms will convince consumers that watching TV at home is the more reasonable option.

AMC desperately needs the film business to win that war fast. If it doesn't, it will need money it can't afford to borrow from lenders, who may not actually be willing to offer the movie theater chain a loan anyway. 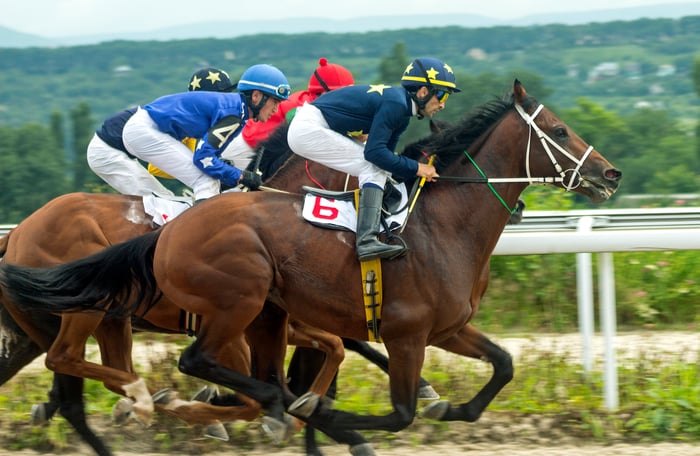 Recovery? Maybe, or maybe not

Whether or not consumers are ready and willing to return to cinemas depends on whom you ask and when. As reported by Variety, a survey performed by a partnership between Performance Research and Full Circle Research in the middle of last month determined 70% of consumers would prefer to watch a new release in their own home. Conversely, movie ticket and digital rental website Atom Tickets recently reported results of its similar survey suggesting 77% of digital movie watchers are ready to return to actual movie theaters within a few months.

The mixed message of the two surveys is a microcosm of the broad uncertainty making it difficult to predict the near or distant future. That's a problem for AMC. See, it doesn't have time to wait for film fans to decide it's safe enough to visit the cinema. The same "going concern" filing with the Securities and Exchange Commission reads:

It sounds like boilerplate, but it's newly added language at a time when AMC, like its peers Cinemark Holdings (CNK 1.21%) and Regal Entertainment parent Cineworld Group (CNNW.F -13.37%), is clearly on the ropes. COVID-19 has slowed a lot of industries, but it has brought the movie industry to a screeching halt.

AMC has been hit disproportionately hard.

Wednesday's preliminary look at its numbers for the quarter ending in March points to a 21% decline in revenue due to theater closures that went into effect beginning in the last couple of weeks of the quarter in question. But the situation took a much bigger toll on the bottom line. Non-generally accepted accounting principles (GAAP) earnings before interest, taxes, depreciation, and amortization (EBITDA) fell from a year-ago figure of $108.2 million to only $3.1 million in the company's first quarter of 2020. Given AMC's plans to continue making interest payments on its $4.7 billion worth of long-term borrowings, that paper-thin EBITDA will be reduced by another $83 million worth of real, cash-based interest expenses.

Depreciation and amortization don't directly burn much-needed cash, and income tax only applies when there's actual income. It just doesn't matter. Between $83 million worth of quarterly interest payments -- a payment required every single quarter -- and the handful of other spending that can't be avoided, the $718 million worth of cash AMC Entertainment says it has on hand as of April 30 may simply not be enough to last through lean times if they linger. AMC needs customers, and it needs them now.

Only one way out

The theater chain can borrow and refinance of course. That depends on whether any lender wants to take a chance on a struggling business that was moving toward insolvency even before the coronavirus pandemic took hold. That's a big "if."

Banks and financial backers are not nearly as generous as they were as recently as February. The Federal Reserve reported that in April, U.S. banks conceded they've raised their standards for making business loans, citing unknowns related to COVID-19. This doesn't necessarily impact AMC Theatres, which could go back to the public market for fresh funding. However, since Moody's downgraded the bulk of AMC's debt from Caa1 to Caa2 in April, the theater chain's corporate credit score is now deeper into "junk" status than it was just three months ago. This translates into even higher interest rates, assuming any lenders would be willing to take such a chance.

Simply put, AMC Entertainment Holdings can't wait a few months for a full recovery of the film business. That $718 million will be burned up rather quickly without an industrywide rebound, particularly if the company reopens theaters only to see them remain unfilled.