Please ensure Javascript is enabled for purposes of website accessibility
Log In Help Join The Motley Fool
Free Article Join Over 1 Million Premium Members And Get More In-Depth Stock Guidance and Research
By Keith Noonan – Updated Jun 12, 2020 at 9:52AM

The economy appears to be bouncing back from coronavirus-related challenges, which could alter the outlook for stimulus payments.

Recently released Bureau of Labor Statistics data showed that the U.S. added roughly 2.5 million jobs in May, a staggering figure considering that most economists anticipated roughly 8 million jobs would be lost in the month. A faster-than-expected recovery for the economy would be great news, but the surprising workforce gains could also have implications for Americans hoping for another round of stimulus checks.

May's employment tracking quickly reframed discussions about the near-term economic outlook in the U.S. and whether Americans should expect another $1,200 direct stimulus payment. The passage of another economic relief bill this year still looks probable, but last month's jobs numbers could play a big role in determining what's included in new stimulus legislation. 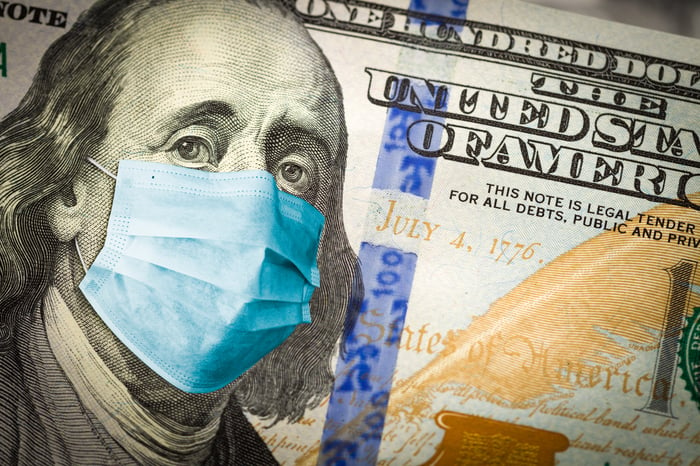 What signs of rapid recovery mean for another stimulus bill

The Coronavirus Aid, Relief, and Economic Security Act (CARES Act for short) was passed at the end of March and apportioned roughly $2 trillion in stimulus spending that included financial support for businesses and direct stimulus payments as high as $1,200 for 159 million Americans. While the CARES Act easily sailed through Congress, efforts to chart a course for another stimulus bill have proved contentious.

Another round of $1,200 stimulus payments seemed likely prior to the recent jobs report, but the record-breaking payroll surprise in May appears to have shifted legislative priorities in some corners. Reports suggest that the Trump administration is now looking at a smaller stimulus program, but the executive branch's approach is still being formulated, and notable disagreements exist among advisers.

Following the publication of May's job numbers, White House economic adviser Stephen Moore was quoted by The Washington Post as saying: "There's no reason to have a major spending bill. The sense of urgent crisis is very greatly dissipated by the [jobs] report." On the other hand, senior economic adviser Kevin Hassett recently described another stimulus bill as a virtual certainty. Whether the new bill would include another $1,200 direct payment to Americans (or a payment of some other amount) is less clear.

Hassett stated that the White House's stimulus agenda will be calibrated with June's labor and economic data in mind, and Labor Secretary Eugene Scalia anticipates that this month's jobs numbers will once again be very strong. If the current economic and political trajectory holds, that generally points to a smaller stimulus bill than what was delivered with the CARES Act. Another round of stimulus checks for Americans is still a possibility, but the amount or scope of direct payments could be significantly smaller.

June's data could shape a new bill in July

After losing 20.5 million jobs in April and recording an unemployment rate of 14.7% in the month, unemployment in the U.S. dipped to 13.3% in May. Despite the unexpected recovery, tens of millions of Americans are still out of work, and economic conditions will likely remain challenging in the near term. With elections fast approaching in November, the contents of another stimulus bill are a hot and highly contested topic.

The Health and Economic Recovery Omnibus Emergency Solutions Act (HEROES Act) narrowly passed the Democrat-led House of Representatives last month. But the bill always faced dim prospects in the Republican-led Senate, and it is almost certainly doomed in its current state following May's jobs numbers. The HEROES Act targets $3 trillion in coronavirus-relief spending and includes provisions for another round of $1,200 stimulus checks and expanded unemployment insurance payments through January.

President Trump and officials within his administration have made comments in favor of another round of stimulus checks for Americans, indicating some level of bipartisan support for additional direct payments despite potential disagreements about scope and implementation. Congressional approval for new stimulus legislation is unlikely to occur before July, so it will take some time before a picture starts to emerge. Americans shouldn't treat another round of direct payments as a sure thing, and it's prudent to assume that payments may come in significantly lower than $1,200 per person, if they arrive at all.