Please ensure Javascript is enabled for purposes of website accessibility
Log In Help Join The Motley Fool
Free Article Join Over 1 Million Premium Members And Get More In-Depth Stock Guidance and Research
By James Brumley – Jun 20, 2020 at 10:00AM

Existing bondholders aren't even nibbling at the chance to swap their debt for something seemingly more compelling, suggesting they see bankruptcy ahead.

In retrospect, it comes as little surprise that owners of debt issued by movie theater chain AMC Entertainment (AMC 9.08%) aren't jumping at the chance to exchange their current holdings for newly issued paper. Doing so would effectively lock in a near-halving of the principal amounts they initially invested; in some cases it could weaken their legal claim on any assets should the organization be forced into bankruptcy. At least by holding onto the bonds they already own, there's a fighting chance they could reclaim some of their unrealized losses without giving anything up to do so.

On the other hand, it matters little at this point. Given AMC's struggle and resulting fiscal position, nobody's likely to come out a winner. Debtholders are simply maneuvering (or not maneuvering) in an effort to lose the least.

It should concern shareholders, not because they're always at the bottom of the liquidation totem pole, but because it's another hint that AMC Entertainment is increasingly desperate.

The short version of a long story: AMC Entertainment -- which owns AMC Theatres as well as Carmike Cinemas -- was already on the defensive before the coronavirus contagion prompted theater closures. The media and entertainment business is changing, as streaming becomes more and more common. COVID-19 may ultimately end up serving as a death blow unless the box office stages an incredible comeback. 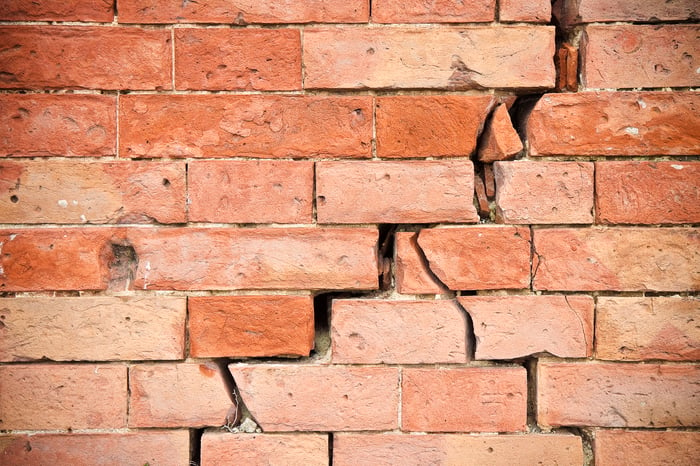 The situation hasn't left any stakeholder unaffected either. While shares of the stock are still down about 30% from their February peak despite a 165% rebound from the bottom they hit in mid April, the value of the company's debt has taken a beating.

That steep deterioration in AMC's bond prices is at least partially in response to not one, not two, but three ratings downgrades from Moody's after the contagion took hold in the United States. Already considered "junk," the second downgrade in April took AMC from being speculative to being downright poor quality. The third downgrade Moody's put in place earlier this month following the unveiling of AMC's aforementioned debt-swap offer left the company's credit rating just shy of being near default, with a default likely in the near future.

(Almost) needless to say, bond owners aren't happy. They're letting it play out though, because ... what's the alternative? The movie theater chain will either recover or it won't, and that's entirely a function of how quickly the coronavirus outbreak is contained.

The company isn't standing still, however. It's aiming to not only pare down its heavy debt burden but also reorganize that debt in a way that ensures its best chance for survival now and the most accommodating capitalization later. The proposed deal would reduce AMC's $5 billion debt load by about $1 billion, but it would do so by exchanging current debt for paper that's only worth about half the par value of debt those investors already own. Moreover, the debt swap would create a new pecking order of sorts. As the company's June 3 press release explains:

The New Notes will be fully and unconditionally guaranteed on a joint and several basis by each of AMC's subsidiaries that guarantee its obligations under AMC's senior credit facilities (the "Senior Credit Facilities") and will be secured by a second-priority lien on substantially all of the tangible and intangible assets owned by AMC and the guarantor subsidiaries that secure obligations under the Senior Credit Facilities (the "Collateral"). In the event that consents from holders of a majority of each series of Existing Subordinated Notes are received in each of the Consent Solicitations, the New Notes will be subordinated in right of payment to all indebtedness of AMC that is secured by a first-priority lien on the Collateral.

Translation? Debtholders' respective places in line in the event of a bankruptcy-driven liquidation could be shuffled by this restructuring.

To that end, it's not surprising that AMC Entertainment had to extend the cutoff point for debt holders to make the swap earlier this week, just as it's not surprising the Wall Street Journal reported late Wednesday that much of AMC's existing bondholder base isn't on board. Although it superficially sweetens the value of what they own, the restructuring plan would rerank where those debtholders stood in line should bankruptcy lie ahead.

On the surface, the tension among some debt owners and AMC Entertainment seems to mean little to shareholders who already understand they are last in line, so to speak. Their greater risk is matched with a greater potential reward.

The fact that few (if any) holders of AMC's debt eligible for the exchange are nibbling on the offer for something seemingly more certain is a red flag in a couple of different ways. First, it confirms that the movie theater chain is struggling to secure capital and manage its liquidity. Second, it indicates that at least most bondholders don't think much of AMC's chances of avoiding bankruptcy. Both are alarming omens for stockholders of a company with problems well beyond its debt headaches.