Please ensure Javascript is enabled for purposes of website accessibility
Log In Help Join The Motley Fool
Free Article Join Over 1 Million Premium Members And Get More In-Depth Stock Guidance and Research
By James Brumley – May 1, 2020 at 7:00AM

The theater chain's refusal to show Universal's films does more damage to AMC than Universal, which is quickly learning about the power of direct-to-consumer.

The sentiment is understandable. Movie theaters helped movie studios become the successes they are today, and it would be nice if studios worked to maintain the symbiotic relationship.

However, AMC Entertainment Holdings (AMC 1.78%) -- the name behind AMC Theatres -- may want to think twice about the tactic it's using to sustain these amicable partnerships. Neither it nor rival movie houses like Cinemark Holdings are in a position to exercise leverage as distribution venues, because what little leverage they still enjoy continues to deteriorate. The strong-arm approach may only worsen the industry's struggle.

Like most industries right now, the film business has been gravely impacted by the global coronavirus outbreak. Theaters have been shuttered for weeks as part of an effort to curb the contagion, including the aforementioned AMC and Cinemark. That's prompted studios to postpone the release dates of most films finished in time for this summer.

Comcast (CMCSA -1.94%) wanted to try something different, though. Perhaps more of an experiment than a must-do, its Universal Studios arm opted to sell its animated film Trolls 2: World Tour directly to consumers as a streaming video, leaving shuttered theaters out of the loop. The studio has also quietly done the same for The Hunt, Invisible Man, and Emma. 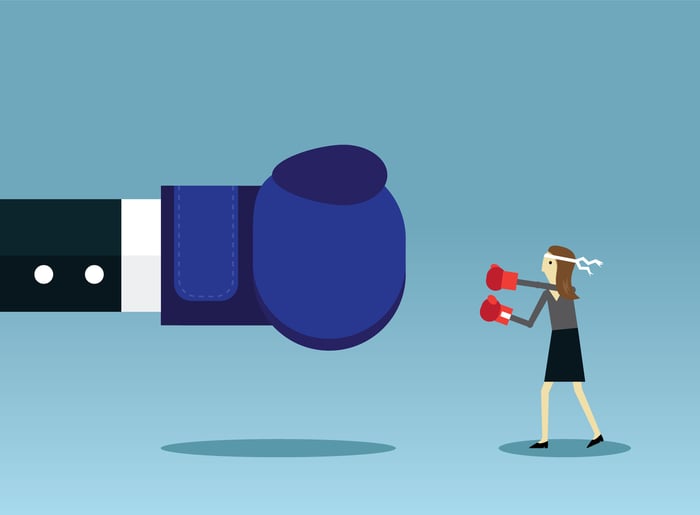 Trolls was an especially serendipitous success, however -- enough of a success for NBCUniversal CEO Jeff Shell to tell The Wall Street Journal earlier this month: "The results for Trolls World Tour have exceeded our expectations and demonstrated the viability of PVOD [premium video on demand]." At $19.99 for two days' worth of access, the movie has grossed around $100 million, breaking records in the process. Shell intimated that more direct-to-consumer films could be in the offing because, why not? It seems to work.

AMC's CEO, Adam Aron, officially responded on Tuesday, explaining in a press release: "Effectively immediately AMC will no longer play any Universal movies in any of our theatres in the United States, Europe or the Middle East." Then, just to answer the question before anyone had to ask, Aron added:

This policy affects any and all Universal movies per se, goes into effect today and as our theatres reopen, and is not some hollow or ill-considered threat. Incidentally, this policy is not aimed solely at Universal out of pique or to be punitive in any way, it also extends to any movie maker who unilaterally abandons current windowing practices absent good faith negotiations between us, so that they as distributor and we as exhibitor both benefit and neither are hurt from such changes.

Fair enough. And for the record, Regal Theaters parent Cineworld made the same decision on Wednesday.

There's a problem, though: Neither Cineworld nor AMC are in a position to play hardball, and particularly not with Comcast's Universal.

The theater business is dying

It's a bit difficult to see with just a quick glance, as the industrywide numbers appear to be holding up. Last year's domestic box office receipts of $11.3 billion were down slightly from 2018's tally of $11.9 billion, according to data from Box Office Mojo. But, 2018 was one heck of a record-breaking year.

A closer look at the data, however, reveals one curious detail. That is, the industry's growth is almost entirely the result of more theater seats and higher ticket prices. The average total ticket sales figure per movie, per venue has been dwindling for years. 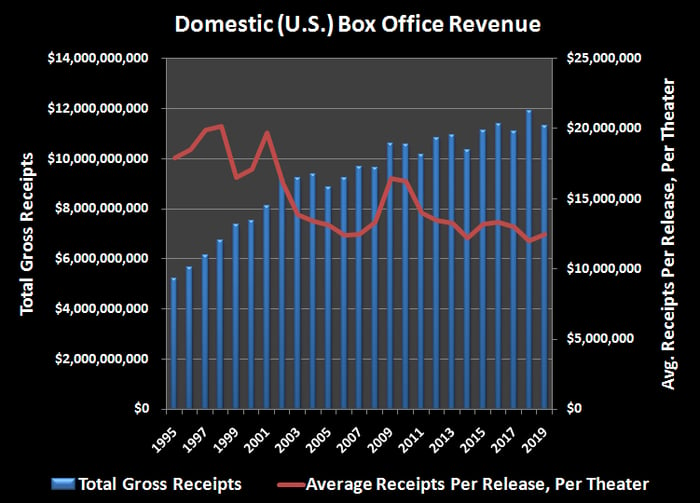 Ditto for the total number of tickets being sold, which is even more alarming. The Numbers -- which tracks movie industry data -- reports that last year's total of 1.24 billion individual movie tickets sold in the United States was the second lowest number in years, extending a broad downtrend that first took shape in 2001. 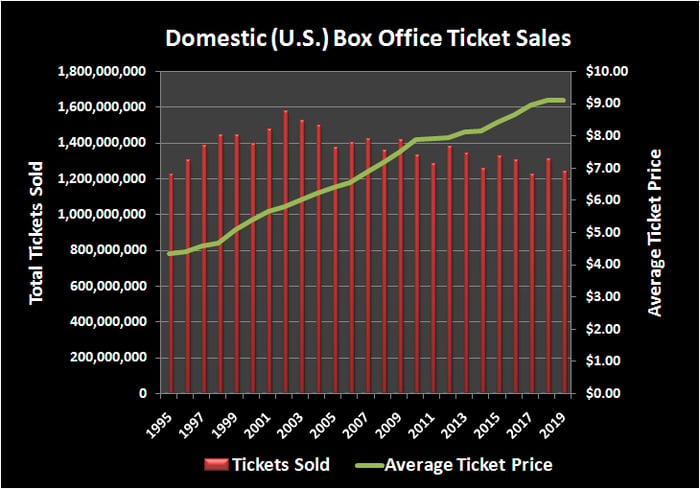 Presumably, the international movie theater is running into the same headwind.

It's difficult to assign a specific cause-and-effect relationship to the 2001 tipping point, but that was around the time Netflix was gaining traction as a DVD delivery name. That's also when broadband started to become commonplace, bringing a world of digital entertainment to people's computers in an instant.

Regardless of the reason, it's movie theaters ultimately on the defensive, here. The six biggest studios, which include Universal, Walt Disney, AT&T's WarnerMedia, and others, are making more money while making fewer films thanks to the myriad ways to monetize that content outside of theaters. Netflix is one of them, of course, but not the only one. Thanks to the relative success of Trolls 2: World Tour, studios can have even more confidence that bypassing theaters and going straight to consumers with the product is a viable strategy.

And of all the studios a theater chain might want to tangle with, Universal is the last one to provoke. Over the course of the prior four years, it's made more films than any other major name.

Don't take the theme to the extreme. Theaters will be around in the future, even if there are fewer of them. There's just something about seeing some films on a giant screen that can't always be replicated at home. Shell has even pulled back a bit on his excitement about the potential of PVOD, saying during Comcast's first-quarter earnings call Thursday, "There's no question that theatrical will some day be a central element to our business and film business — it's how people make their movies and how they expect their movies to be seen."

Even so, Shell made a point of qualifying his peace offering by adding, "I would expect that consumers will return to the theaters and we will be part of that. And I also expect that PVOD is going to be a part of that in some way. ... [T]he flip side is the majority of our movies, whether we like it or not, are being consumed at home. It's not realistic to assume that we're not going to change."

One doesn't exactly have to read between those lines.

That's why Cineworld's and AMC's protests are more likely rooted in fear than either is letting on. Management teams from both companies see the same trends charted above and realize more of the same isn't a good thing; anything less than exclusive first-run access to all new films may simply not be enough.  Both chains may also be sending a subtle message to Walt Disney and Warner to prevent such confrontations in the future. The former decided to air Artemis Fowl via Disney+ rather than in theaters, and the latter has offered its animated Scoob! as a digital video. AMC didn't cry foul, perhaps hoping to avoid too much public conflict and snubbing several studios at once.

The problem remains, though: Theaters need studios more and more, while studios need theaters less and less. The parties on both sides of the table are starting to see that more clearly now.