These tech leaders have what it takes to deliver huge returns over the long term.

Investors have had to contend with unprecedented volatility in 2020, but so far it's actually been a pretty good year for many technology companies. No one knows exactly where the market is heading next, but identifying tech players at the forefront of powerful trends is a path to big gains, and buying amid stock dips can push your long-term returns even higher.

Match Group (MTCH), Impinj (PI -5.20%), and StoneCo (STNE -0.84%) are three stocks that I've purchased when the market had down days in June. Here's why I plan to continue adding to my positions in these companies when opportunities arise. 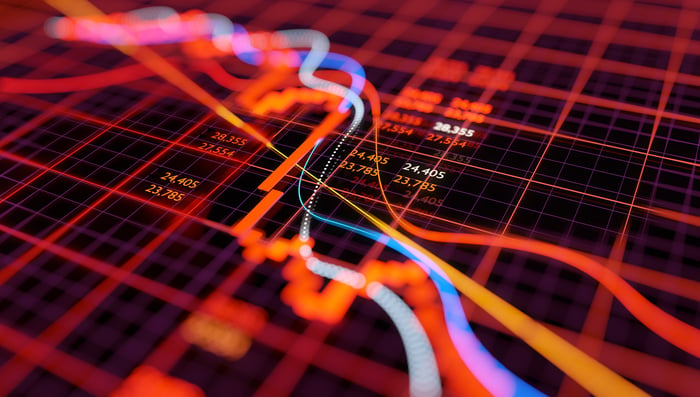 Online dating is bigger than ever, and it's only going to get more popular. More romantic relationships are already started online than through meeting at bars, through friends, or any other way, and Match is poised to benefit from the new world of dating thanks to its strong portfolio of romance-focused software. The company owns platforms including Tinder, Match.com, OkCupid, Plenty of Fish, and Hinge, and it generates most of its revenue from selling premium subscriptions and upgraded features across its sites and apps.

The jewel of the company's dating software portfolio is Tinder -- an app that's wildly popular among millennial and generation Z demographics. Tinder is the most popular dating app in the U.S. and accounts for roughly 60% of Match's paying users, but the company's main platforms all rank among the top 10 most used dating apps in the country.

Match has a leading position in the fast-growing online dating market, and it's on track to continue leading the space despite concerns about Facebook moving in on its turf. While Facebook has rolled out dating features, enjoys a massive user base on its namesake social media network, and has also been using its Instagram platform to build a position in dating, it doesn't appear to be putting much pressure on Match's more specialized offerings.

Online dating is here to stay, and Match has a long runway for growth as it adds more users and increases subscriber revenue.

If you follow the tech sector, there's a good chance you're familiar with the concept of the Internet of Things (IoT) -- the idea that previously unconnected devices and objects will connect to networks and share data. Discussion of the IoT trend often focuses on connecting things like automobiles, street lights, and even refrigerators to networks. However, the connectivity and data-sharing push extends beyond the world of transportation, industrial technology, and consumer electronics.

Impinj makes radio-frequency-identification (RFID) chips and is playing a leading role in helping non-electronic objects share data. The company's RFID tags can transmit information without needing a battery or other power source, allowing them to be both small and durable.

Installing these unobtrusive chips can help companies track inventory to improve their supply chains, better respond to consumer demand, and create new barriers to theft and counterfeiting. Major brands including Nike and Zara are already making use of the tech. The next pair of shoes or winter coat you buy could include a tag and you'd probably never know it.

With a market cap of roughly $640 million and adoption for RFID chips in retail and other markets still at an early stage, Impinj stock could deliver explosive growth if demand for its technologies continues to increase.

Roughly a quarter of U.S. transactions are conducted in cash, but American Express suggests that approximately 85% of transactions in Latin America are still conducted with physical currency. StoneCo is a Brazil-based payment processing company that's helping to facilitate the growth of digital and card-based payments in Central and South America, and its business looks poised for explosive growth over the next decade.

The company is positioned to benefit from the expansion of e-commerce and the overall movement away from cash payments in favor of digital solutions in Latin America. E-commerce accounted for just 5% of total retail spending in Brazil last year, and online retail has similarly low penetration in many other Central American and South American countries. Use of payment processing services should increase dramatically as online retail inevitably grows in these territories, thereby increasing demand for StoneCo's services.

The company is already growing at a rapid clip. Total payment volume on StoneCo's platform increased roughly 42% year over year last quarter despite coronavirus-related headwinds. Revenue in the quarter rose 38.3% compared to the prior-year period even with these challenges, and net income climbed 22.6% year over year. StoneCo also added 50,500 new merchant partners to its payment network last quarter, bringing its total active client count to 531,300.

StoneCo is already consistently profitable and trades at roughly 74 times this year's expected earnings. There's already plenty of growth baked into that valuation, but it could wind up looking very cheap five years down the road.