Today's biggest losers are the same stocks that delivered big gains for investors yesterday: airlines, cruise lines, hotels, casinos, and travel and leisure booking companies. In short, it's looking like investors are coming back down to earth after so much excitement around Moderna's (NASDAQ:MRNA) potential coronavirus vaccine that's still many months -- and perhaps longer -- away.

Bank of America earnings: Consumer spending is improving, but still preparing for a bad recession 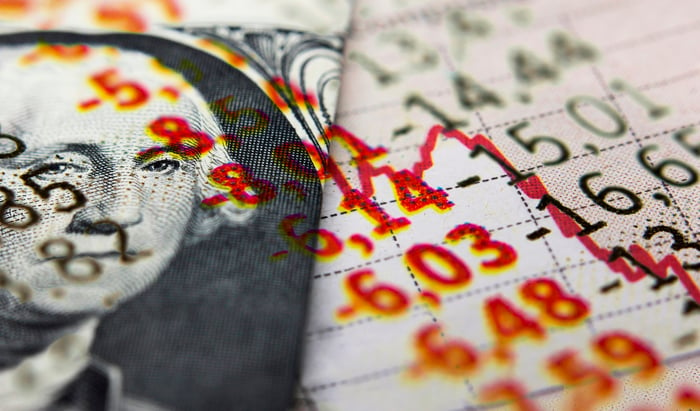 America's second-biggest bank by assets, Bank of America, reported second quarter results before market open today, with net income falling by half to $3.5 billion. The universal bank -- meaning it does both commercial lending and investment banking services -- said non-interest income was up 5% due to capital markets activity on the investing side, and that deposits increased 21%.

So while executives were relatively optimistic on the earnings call, pointing out that consumer spending was improving from the low point, their actions to prepare the balance sheet for a protracted downturn speaks volumes. In the market's typical "shoot the messenger" behavior, Bank of America's stock is falling today, losing more value than its megabank peers (even though it took smaller loss provisions than the others): 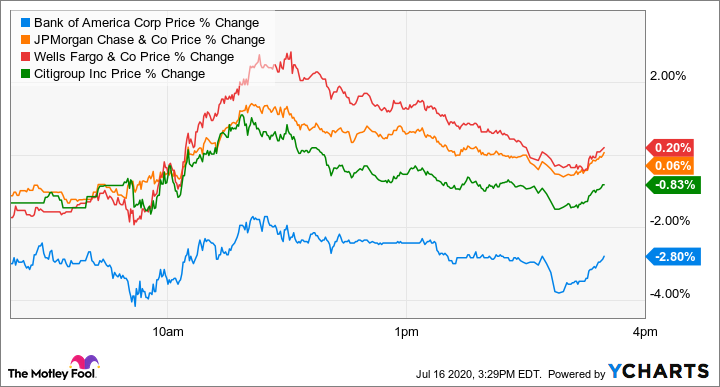 After reporting double-digit gains yesterday, Royal Caribbean Cruises (NYSE:RCL), Carnival Corp (NYSE:CCL), and Norwegian Cruise Line Holdings Ltd (NYSE:NCLH) shares are down 6.7%, 8.7%, and 13.5% today. This marks a sharp reversal from yesterday's 16%-plus gains for all three stocks, driven by investors coming to grips with the reality today that the economy is in terrible shape and the ongoing crisis isn't going to get resolved overnight.

The airline industry has a tough road ahead, and things could actually get worse. American is saying it could furlough as many as 25,000 workers if conditions don't improve substantially in the next several months. Airlines have not cut large numbers of jobs so far, not because they have needed the workers, but because they could not do so and remain within the terms of the government lifelines they have received. But those deals are set to expire, and airline workers are likely to start joining the ranks of the unemployed in big numbers in the second half of the year.

Joining the airlines in the move lower today is Boeing (NYSE:BA) as the troubled company faces a steady threat of airlines canceling orders for new aircraft. Despite big long-term demand for new aircraft, Boeing's struggles with the 737 MAX have come at the worst time for the company, which is struggling to keep its order book filled as the downturn persists.

Abbott reported $7.3 billion in revenue, down 8.2%, but well above the expected $6.75 billion, and adjusted earnings of 0.57 per share, down 30% but well above the expected $0.41 per share. The company pointed to a combination of foreign exchange fluctuations and the impact of the coronavirus pandemic on sales and profits, but also said that growth in diagnostics sales, up 4.7%, was in part due to a 10% surge in rapid diagnostics sales.

Johnson & Johnson had a tougher second quarter. Revenue fell almost 11%, and earnings of $1.36 per share were down 35%. Management is working to contain variable expenses like sales and marketing, which it wasn't able to flex lower as quickly as revenues fell in the quarter. For the full year, the company is now calling for sales to fall as much as 2.6%, and for earnings between $7.50 and $7.90 per share, which would be down between 8.4% and 10.7% from last year.

Coming up: Netflix, Trains, and Automobiles

Streaming giant Netflix's (NASDAQ:NFLX) earnings call is happening as these words are being written; the stock is down double-digits in after-hours trading, so it looks like investors are "selling the news." Tune back in here tomorrow for a deep dive from our Netflix experts.

Another after-market reporter today is J.B. Hunt (NASDAQ:JBHT). The trucking company said sales fell 5% in the second quarter, while operating income fell 9% and earnings of $1.14 per share was down 7%. In an ugly quarter for consumer demand, those results aren't too shabby in the ultra-competitive trucking industry. Check back soon for a closer look at the company's results, and expectations going forward.