Last week's market volatility was a friendly reminder that patience can pay off for investors. Tuesday saw the Nasdaq Composite fall by 4% only to snap back to almost flat by market close. Thursday wasn't so kind, as the S&P 500 and the Nasdaq suffered their worst daily declines since late October. Similarly, many renewable stocks swung up and down. Whether the issues of concern involve rising interest rates, stock valuations, or the simple fact that the pandemic continues to rage on, there's a lot of uncertainty in the markets right now. And that uncertainty creates plenty of buying opportunities for investors looking to pick up stocks at a discount. 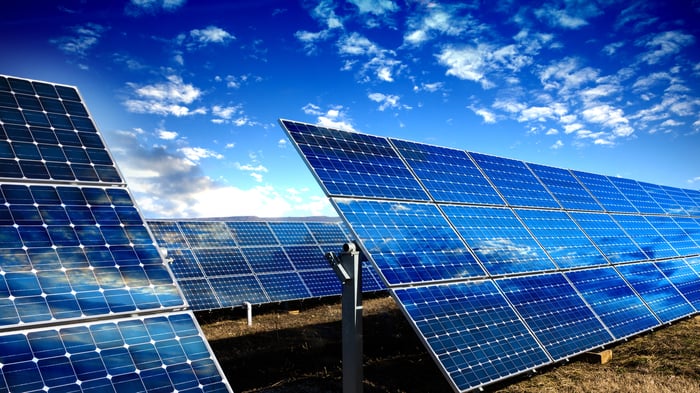 Lee Samaha (General Electric): I know GE might seem like an odd choice for a renewable energy play, but in an increasingly expensive market, it might be one of the best value options for wind power enthusiasts.

GE's offshore hopes are centered on its giant Haliade-X wind turbine, and it has made a good start on marketing it: It has orders for 190 of them for the first two phases of the Dogger Bank wind farm project in the U.K.

GE's aim is to get to the kind of high-single-digit-percentage operating profit margins that its main rivals, Vestas and Siemens Gamesa, have achieved in recent years. Thanks to the surge in interest in renewable energy, those two businesses now trade at enterprise values (market cap plus net debt) of around 2.3 times revenue. 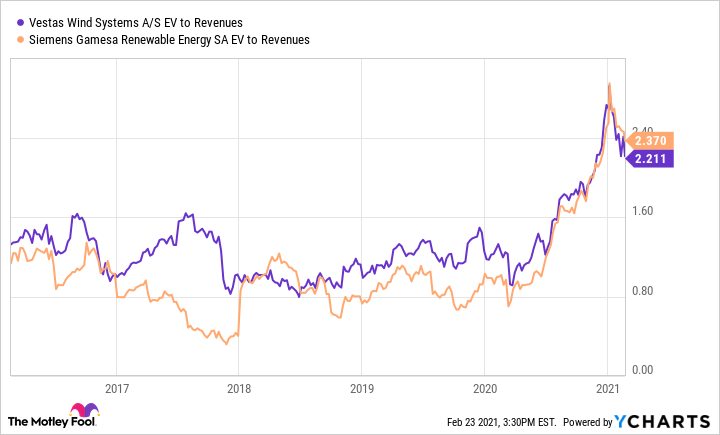 If GE can lift its renewable energy profit margins into line with those of its peers, then the GE Renewable Energy unit could be valued on a similar multiple of sales. Thus, based on its 2020 revenue of $15.67 billion, the business would be estimated as having an enterprise value of nearly $36 billion.

That would make up a large chunk of GE's current total company EV of around $142 billion. Throw in the potential for the offshore wind business to generate multibillion-dollar sales over the next decade, and there's plenty of upside potential for GE Renewable Energy.

Daniel Foelber (Array Technologies): After a seemingly unstoppable rise that resulted in a 234% return for 2020, the Invesco Solar ETF (NYSEMKT: TAN) -- a commonly used benchmark for the solar industry -- has cooled off. Indeed, it's down for 2021, year to date.

After last year's surge, led by high-flyers like SolarEdge and Enphase Energy, there were plenty of reasons to view solar stocks as a little overvalued headed into 2021. However, the average stock in the ETF is down by an average of 17% in just two weeks, presenting some better buying opportunities.

There's still an argument to be made that many renewable stocks are overvalued, but the sector is being propelled forward by some impeccable long-term growth trends. A lesser-known name that has yet to be included in the index is Array Technologies, a leading designer and manufacturer of single-axis solar trackers for utility-scale projects. These trackers adjust the angles of solar panels, allowing them to more efficiently capture the sun's rays throughout the day. There's evidence to suggest that the market for solar farms with trackers is growing much faster than the market for standard ground-mounted systems. This trend bodes well for the company: Already, more than 25% of solar modules in use in the U.S. are mounted on Array's trackers.

Management expects the installation of solar power systems with trackers to grow at a compound annual rate of nearly 20% over the next three years, more than three times the growth rate for fixed-tilt systems. Array went public in October, but it has been around for decades, so it has a proven track record, unlike many other IPO stocks. It posted impressive top- and bottom-line growth over the last few years, making it cheaper than other leading solar stocks on a price-to-sales and enterprise-value-to-EBITDA basis.

Array Technologies will deliver its fourth-quarter results on March 9, just its second report as a public company. Investors should pay attention to how its full-year performance stacked up relative to its peers, and look for any new information regarding its plans to further expand its U.S. presence and gain traction in emerging markets. Array could be a volatile solar stock in the short term, but the company's leading position in solar trackers and its reasonable valuation give it plenty of long-term upside potential.

This green stock's growth has only just begun

Scott Levine (Brookfield Renewable): Look at Brookfield Renewable today, and you'll find the company's portfolio is considerably larger and more diversified than it was 10 years ago. Back then, its assets totaled about 5,000 megawatts (MW) of electrical generating capacity, most of it from hydroelectric sources. Today, Brookfield Renewable has a portfolio -- with assets located in 17 countries -- representing 19,400 MW of generating capacity across an array of renewable energy assets that includes solar, wind, distributed generation, and battery storage.

But wait, there's more. Management is also cognizant of other business opportunities that can complement its present operations. On its recent fourth-quarter conference call, management noted that it's "seeing growth in new asset classes that leverage renewable power and decarbonization solutions, whether it be green hydrogen or green data centers." And while he refrained from discussing the specific dollar amounts associated with these opportunities, CEO Connor Tesket stated that "the growth opportunities we see today are bigger than they've ever been before."

In terms of its growth prospects, Brookfield Renewable has a development pipeline representing 23,000 MW of capacity. And it's not as if investors will have to wait too long to start seeing the benefits. Of the projects in this pipeline, Brookfield Renewable revealed in its last earnings report that it has "progressed almost 4,200 megawatts through construction and advanced stage permitting."

Portfolio growth is one thing, but potential investors surely want to know that management foresees comparable growth in the company's finances. It does: Management forecasts annual funds from operations per unit to grow in the 6% to 9% range.

Oftentimes, one must pay a premium for a growth stock, but in the case of Brookfield Renewable, investors can pick up shares on sale. Currently, the stock is trading at 8.1 times operating cash flow, a discount to the 14.7 multiple that it averaged in 2020. Similarly, the stock has a price-to-sales ratio of 2.6, a bargain level compared both to its multiple of 4.7 in 2020 and the 2.8 P/S ratio of the S&P 500. For investors seeking a great renewable energy growth opportunity at a bargain price, Brookfield Renewable should present an enticing opportunity.