Please ensure Javascript is enabled for purposes of website accessibility
Log In Help Join The Motley Fool
Free Article Join Over 1 Million Premium Members And Get More In-Depth Stock Guidance and Research
By Rekha Khandelwal - Apr 29, 2021 at 9:41AM

One of the two clean energy stocks is clearly a better buy right now.

Hydrogen fuel cell maker Plug Power (PLUG -0.11%) aims to provide zero-emission fuel cells that can store energy. This can later be used when needed both in stationary applications as well as hydrogen-powered vehicles. By comparison, Brookfield Renewable (BEP -0.32%) (BEPC 0.25%) owns and operates renewable-power generation assets. Though both companies focus on clean energy, they differ in their operations, target market, and performance. Let's see which of the two is a better buy right now. 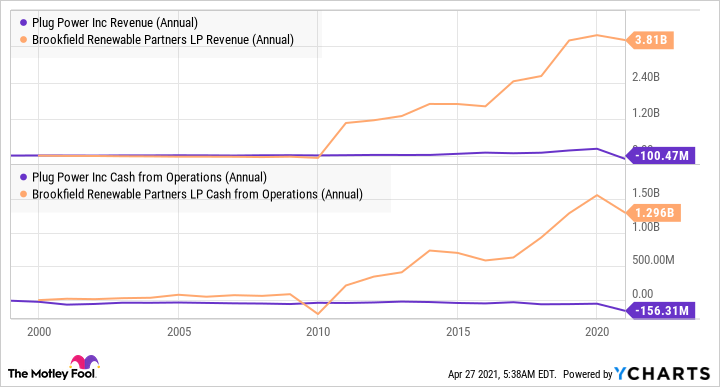 Plug Power's negative revenue in the above chart is due to certain warrants it issued to Amazon. Plug Power recently entered into several key partnerships that could boost its revenue growth. However, profits remain elusive for the fuel cell maker.

According to the International Energy Agency, use of renewable energy sources in global electricity generation rose by 7% in 2020. Further, it is expected to rise by 8% in 2021. That sets renewables on track to account for nearly half of global electricity generation by 2030, up from their 29% share in 2020. That's a significant rise and should benefit renewable energy producers including Brookfield Renewable in the coming years. 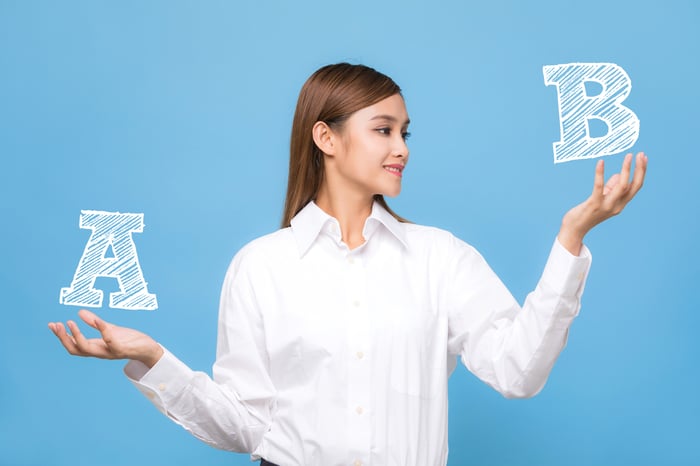 By comparison, Plug Power aims to raise its annual gross billings from $337 million in 2020 to $1.7 billion in 2024 -- a huge target. Importantly, more than revenue growth, the real concern with Plug Power is profitability. In the absence of customers willing to pay a higher cost for hydrogen fuel cells, Plug Power right now sells products at a loss, hoping to reduce costs enough to become profitable someday. Even if it is able to reduce costs, a simultaneous fall in lithium-ion batteries' costs may mean profits could remain elusive for Plug Power until its costs fall more than competing technologies. That looks like a difficult feat to achieve.

Hydrogen-powered vehicles have so far seen a slower adoption than battery-powered ones. There is no strong reason to believe that this would change soon. On the contrary, widespread development of electric charging infrastructure could potentially inhibit the growth of fuel-cell powered vehicles.

So, Brookfield Renewable seems to have brighter growth prospects compared to Plug Power.

In addition to risks relating to the adoption of hydrogen fuel cells, Plug Power also faces some company-specific risks. For example, nearly half of the company's 2019 revenue came from just two customers. The company hasn't released its report for 2020 as it needs to restate certain financial statements and is still working on them.

By comparison, Brookfield Renewable has a diversified customer base. No single market accounts for more than 10% of its cash flows. Moreover, its cash flows come from more than 600 investment-grade counterparties.

Brookfield Renewable stock has risen steadily over the years, reflecting the company's consistent performance. It did rise significantly in the last year but has fallen around 16% from its high this year.

Based on Brookfield Renewable's strong performance and growth prospects it looks like a better buy than Plug Power right now. The stock also offers a dividend yield of around 3%, making it attractive for income investors, too.