Please ensure Javascript is enabled for purposes of website accessibility
Log In Help Join The Motley Fool
Free Article Join Over 1 Million Premium Members And Get More In-Depth Stock Guidance and Research
By Timothy Green - Apr 30, 2021 at 8:00AM

The next few years are going to be interesting for the electric-car company.

Electric-car company Tesla (TSLA 1.24%) has now produced a profit for seven consecutive quarters. Tesla managed a GAAP net income of $438 million in the first quarter, up from just $16 million one-year prior. It would appear, at least at first glance, that the electric-vehicle (EV) pioneer is on the right track in terms of profitability.

The problem is that these profits aren't really coming from the cars that Tesla sells. The company currently generates hundreds of millions of dollars in pure profit each quarter from the sale of regulatory credits, a side effect of other automakers not making enough zero-emission vehicles to meet regulatory requirements.

Regulatory credit sales totaled $518 million in the first quarter, accounting for all of Tesla's profit and then some. This has been the case in previous quarters, as well. In fact, after backing out regulatory credits from Tesla's net income, the company has been unprofitable for six-straight quarters.

Tesla's bottom line got an additional boost in the first quarter from a gain on the sale of Bitcoin to the tune of $101 million, which showed up as a reduction in costs. The picture doesn't look so rosy when both regulatory credits and Bitcoin gains are excluded: 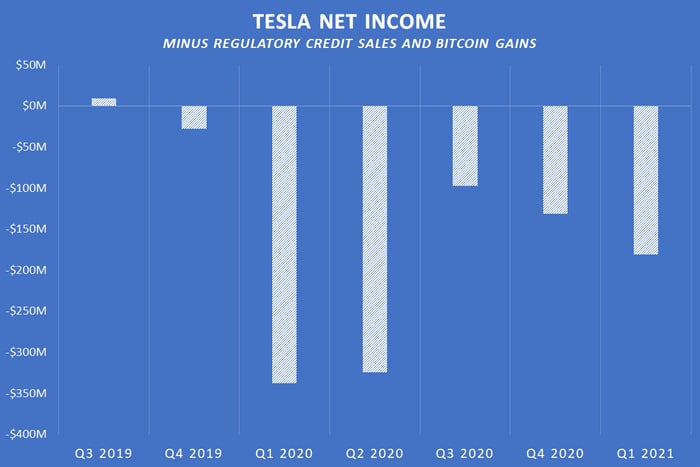 There's no question that Tesla's growth is impressive, but there's also no question that the core business of making and selling cars is not turning a profit. The question Tesla investors need to ask themselves is: If Tesla isn't profitable now, when there's little to no competition in electric vehicles in the United States, what's going to happen when a deluge of competition from traditional automakers arrives?

A ton of competition is coming

Tesla's brand has a cult following, so some people will be buying Tesla vehicles regardless of the other options available. But that's not likely to be the case for most people.

The number of electric vehicles available for purchase in the U.S. is set to explode in the coming years. General Motors (GM 1.35%) is planning to launch 30 EVs globally by 2025, with two-thirds set to be sold in North America. The company is aiming to sell 1 million EVs annually in North America by 2025.

Those models include electric versions of the company's GMC Hummer and Chevrolet Silverado pickup truck. Tesla has a loyal customer base, but so does GM. Someone who's been a GM truck buyer for years is likely to stick with GM when they decide to switch to an electric vehicle. 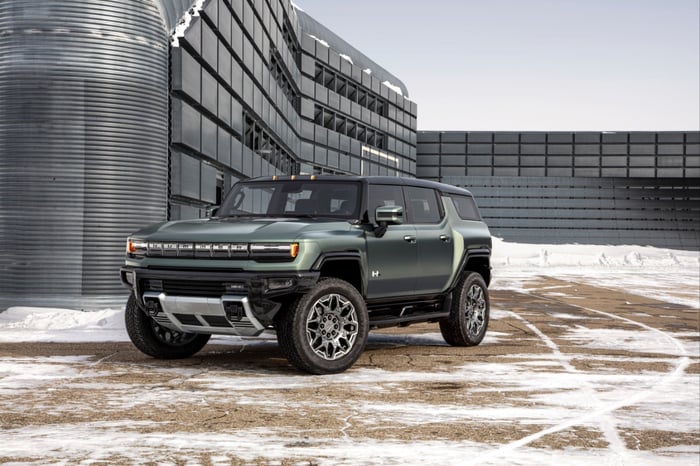 Ford (F 1.71%) is also pouring resources into electric vehicles, allocating $29 billion for electric and autonomous vehicles through 2025. The company's plans include an electric version of its F-150 pickup truck, which should hit the production lines by mid-2022. Given GM's and Ford's plans, it will not be easy for Tesla to steal away market share in the lucrative pickup-truck segment.

Other car companies have big plans, as well. Volkswagen (VWAGY 0.11%) already sells over 200,000 EVs annually and expects that number to double this year. The company is aiming to sell roughly 2 million EVs annually by 2025 and expects to launch 70 EV models by 2030. Toyota (TM 0.84%) will launch 15 new electric vehicles by 2025, some of which will be under the new Toyota bZ sub-brand. The list goes on.

Not only will all these electric vehicles provide consumers with a bevy of options beyond Tesla, but they'll also deprive Tesla of its regulatory-credit income as other automakers churn out an increasing number of EVs.

None of this is to say that Tesla can't be successful in a world where it faces more competition. But turning a profit is is going to get harder with each passing year.