Please ensure Javascript is enabled for purposes of website accessibility
Log In Help Join The Motley Fool
Free Article Join Over 1 Million Premium Members And Get More In-Depth Stock Guidance and Research
By Rich Smith - May 9, 2021 at 6:53AM

ISS may soon be obsolete -- but will we even miss it?

The announcement blazed across the headlines of The Moscow Times on April 19: "Russia to Quit Int'l Space Station in 2025 "!

Citing "a senior government official" (Vice Prime Minister Yury Borisov), MT reported that Russia will soon officially inform the United States and its other space partners of its withdrawal from the International Space Station (ISS) effective in 2025, and its plans to "deploy a next-generation national orbital service station" of its own instead.

Crucially, "withdrawing" from the ISS isn't just a turn of phrase. Russia's plan, it appears, is to physically detach the ISS modules that Russia owns from the station. And yet, at last report, NASA was thinking that the ISS might continue in service through 2030. 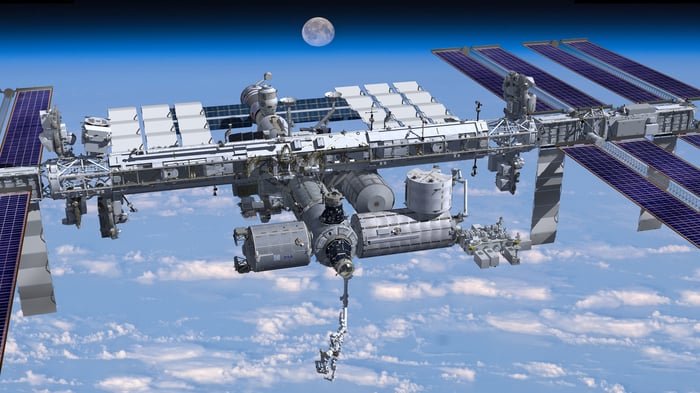 Some commentators have suggested that the ISS could not function without the Russian modules (which, importantly, include the station's main propulsion module, which is used both to maintain a stable orbit, and to maneuver around threatening pieces of orbital debris when they come too close). But others believe the ISS could limp along without the Russian parts, which in any case could be replaced with new modules that we could send up.

Indeed, it's fortuitous that at the same time the (non-Russian) ISS partners are faced with a dilemma about how to fit the station with a new set of engines, multiple companies are developing fleets of "space tugs" for use as ad hoc engines for satellites lacking propulsion. To date, Northrop Grumman (NOC 1.97%) has used two large MEV spacecraft to serve as the engines on defunct Intelsat satellites. Maxar Technologies (MAXR 5.23%) is working on a large space tug of its own. And on a smaller scale, space SPACs Stable Road Acquisition (SRAC) and Vector Acquisition (VACQ) are also developing space tugs for smaller satellites.

Theoretically at least, any of these companies might be recruited into a NASA effort to fit out the ISS with a new propulsion module to replace any Russian parts that go missing in 2025. In short, while a Russian exit from the ISS would pose a problem, it's not an insurmountable problem for America's space industry -- especially given four years (or more -- Russia only plans to begin exiting the ISS in 2025) to figure out a fix.

Perhaps the bigger question for investors to consider, though, is this: Even assuming the ISS can continue limping along after a Russian exit, the station is getting a bit long in the tooth. Construction of the ISS began in 1998, and the station was originally designed for a 15-year lifespan. (Put down your pencils. The ISS should have been retired in 2013.)

Obviously, that didn't happen, but at some point the ISS probably will go away entirely. What happens then?

Well, we've already discussed one part of the puzzle: Russia. If and when Russia retires from the ISS consortium, it plans to begin work on a new, Russian-owned station to replace it. Dubbed "ROSS" -- the Russian Orbital Service Station -- work on this station is expected to begin in 2025, and cost the Russian state about $6 billion to complete.

That's quite a discount from the price tag on the ISS, by the way, which is estimated to have cost upwards of $100 billion to assemble. Even if the ROSS turns out to be a much smaller station than the ISS, this drastically lower price tag suggests that the price of space launch has fallen dramatically over the last 20-odd years.

Russia's new space station will be designed as both a scientific and a production platform, enabling manufacturing in space -- and also in-orbit satellite repair and refueling. It may even evolve into a transportation hub, hosting a fleet of Russia's own space tugs.

Russia has also said it will cooperate with China to build a joint Sino-Russian space station that would orbit the moon -- and that brings us to our second point. In addition to its joint venture with Russia, China has already begun building an Earth-orbiting space station of its own! Centered on the Tianhe module launched from last week, China's new 66-ton "Tiangong" space station is expected to take another 10 launches to complete, to be operational by 2022, and to continue in operation for 10 years thereafter.

And even that's not all. In addition to a still-functioning ISS, a Russian ROSS, and a Chinese Tiangong, American private company Axiom Space won permission from NASA last year to attach a new habitation module to the ISS -- a module that the company intends to later separate from the ISS to form the basis of the world's first privately owned and operated space station.

Long story short, the ISS's days may be numbered, or it may continue in operation for even longer than it already has. With it or without it, though, orbit is about to get a whole lot more crowded. The race to populate Earth orbit with new space stations has begun.