Please ensure Javascript is enabled for purposes of website accessibility
Log In Help Join The Motley Fool
Free Article Join Over 1 Million Premium Members And Get More In-Depth Stock Guidance and Research
By Rich Smith - Sep 9, 2020 at 8:15AM

For the time being, Northrop Grumman's space robots are the only ones able to perform in-orbit satellite repair and service.

While it is still early innings for this new business Northrop is building, and therefore difficult to estimate how big the opportunity might become (both for Northrop and for its customers), Northrop Grumman has leapt to an early lead in an entirely new field of space business. If it proves successful -- and lucrative -- this is a business Northrop has a good chance of dominating for years to come. 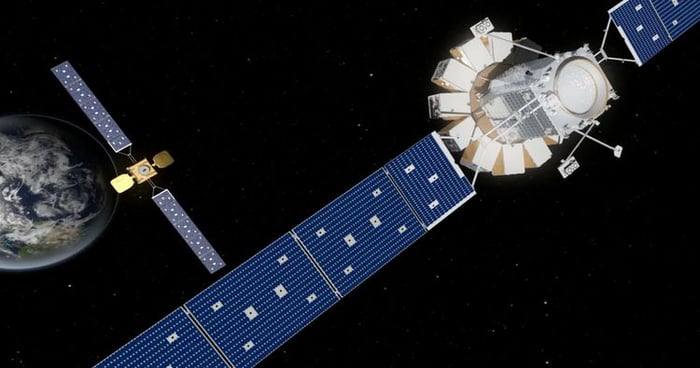 We first told you about the MEV project back in early 2016, when Northrop -- or more precisely, Orbital ATK, the space business that Northrop bought in 2017 -- revealed its plan to launch spaceships into orbit to serve as tow trucks for defunct satellites. When a customer's satellite runs out of fuel, falls into an improper orbit, or simply breaks down, Northrop will launch a MEV to rendezvous with the sick satellite and do whatever is needed to get it back in operation.

In April of this year, Northrop scored its first MEV success, mating with Intelsat's (INTE.Q) IS-901 communications satellite (which was out of gas, inoperable, and floating in a "graveyard orbit"), and taking over the role of the comsat's engine. For a total cost of $65 million, Intelsat will be able to get another five years of service life out of its satellite -- instead of having to spend more than $300 million to build and launch a replacement satellite.

That's a significant cost savings for Intelsat). Significant enough, in fact, that the company has gone ahead and hired Northrop to launch a second MEV (MEV-2) to perform a similar service for its still operational but low on fuel Intelsat 10-02 satellite as well -- and MEV-2 is already on its way.

Last month, Arianespace and Intelsat announced the successful launch of an Ariane 5 rocket carrying several payloads, among them a Galaxy 30 geosynchronous communications satellite that will begin Intelsat's transition to freeing up spectrum for 5G internet service, and also Northrop's MEV-2.

According to the companies, MEV-2's mission will be similar to MEV-1's, but with one important difference: Whereas MEV-1 took over maneuvering responsibilities for a defunct satellite, essentially bringing it back to life, MEV-2 will dock with Intelsat 10-02 while it's still functional and providing critical telecommunications services. If all goes well, Intelsat may never need to remove this satellite from service in the first place.

What it means for Intelsat -- and for Northrop Grumman

Each MEV satellite carries sufficient fuel for 15 years of operations, so while MEV-2 has initially been hired to serve as Intelsat 10-02's "engine" for only five years, it could in theory perform this mission for longer, pushing back the date at which Intelsat has to lay out more cash for a new satellite. (With Intelsat short on cash, struggling under a $15 billion debt load, and working its way through a bankruptcy restructuring, this is not a minor concern.)

The story with Northrop is even more promising.

In an August interview with TheVerge.com, Joe Anderson, the vice president of operations and business development at Northrop subsidiary Space Logistics, confided that Northrop sees in-orbit satellite servicing as a "growth area" for the company.

Indeed, with one MEV mission under its belt already and a second under way, Northrop is preparing to take the next step in expanding this business. It's now at work designing a "Mission Robotic Vehicle", or MRV, which should be able to undertake even more advanced missions than the MEV can perform. Among them: Instead of devoting an entire MEV spacecraft to "engine duty," the MRV will carry and be able to attach engine "pods" to multiple separate satellites to serve as auxiliary engines. An MRV carrying just eight such pods (see artist's rendering above), and deploying each for separate engine duty at the $13 million-a-year rate charged by MEV for this service, could theoretically yield an 8x increase in Northrop's revenue stream from this service. Granted, for a $35 billion-a-year business, the resulting revenue possibility -- $104 million -- won't move the needle a whole lot. But even so, $104 million is a start.

Alternatively -- or additionally -- the MRV may: (1) tow a satellite from a wrong orbit into a right one, and then leave it there; (2) perform up-close inspections of satellites to gauge their health and diagnose problems; and even (3) repair broken satellites in orbit.

Northrop hopes to launch its first MRV in 2023 -- a faster development time than we saw between the initial MEV announcement and MEV's first mission success. Meanwhile, Northrop appears to have no real competition in this industry. While other companies (SpaceX partner Momentus, for example, as well as Maxar Technologies) have expressed interest in the business of in-orbit satellite repair, only Northrop has accomplished it.