Please ensure Javascript is enabled for purposes of website accessibility
Log In Help Join The Motley Fool
Free Article Join Over 1 Million Premium Members And Get More In-Depth Stock Guidance and Research
By James Brumley - Updated Jun 7, 2021 at 10:10AM

As the old adage goes, cheap stocks are cheap for a reason -- even if that measure of "cheap" is an unusually high dividend yield.

Tobacco company Altria Group (MO 0.01%) is more pedigreed than dividend investors have a right to expect. Last year's increased payout to an annualized payment of $3.44 per share marks the 51st consecutive year the company has not only paid a dividend, but also raised it. Better still, Altria can afford to make these payments. The company earned $4.22 per share in 2020, up 6% from 2019, extending a steady streak of operating income and revenue growth. Perhaps best of all, the current payout translates into a yield of 6.9% at Monday morning's prices, one of the very best yields among the market's blue-chip stocks. All in all, that's not too shabby.

It would be short-sighted, however, to not recognize Altria will forevermore face an uphill battle. And that battle just got tougher. Something's got to give sooner or later, and the dividend is on the potential hit list.

There's the Altria you probably know. The one behind the Marlboro brand of cigarettes and parent to Philip Morris USA. It's also the maker of smokeless tobacco products sold under the Copenhagen and Skoal labels.

Then there's the Altria you don't know. This company is also a stakeholder in Anheuser-Busch InBev, as well as cannabis outfit Cronos Group, and owns a third of e-cigarette brand JUUL. 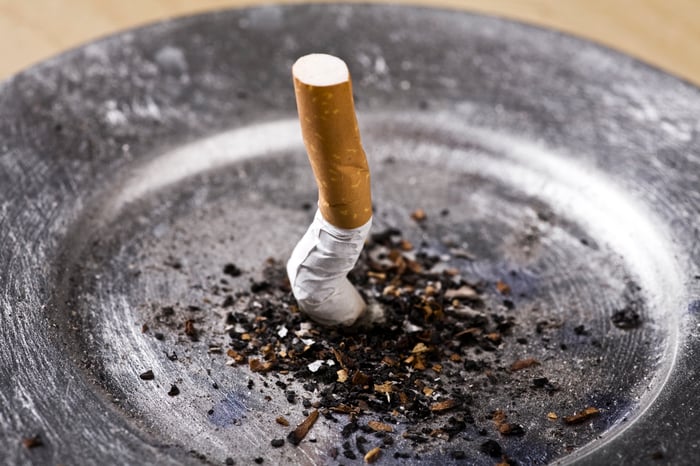 It's a smart mix. Altria's got a presence in many of the key vice markets. If a headwind develops on one front, the company's involved in another. Partial control of outfits like Cronos and Anheuser-Busch also offer opportunities to cross-develop new consumer products.

Altria by and large remains a tobacco name, though, with cigarettes and non-smokable tobacco still accounting for about 95% of its total sales.

And that's a fundamental problem. While it's not readily apparent with a cursory look at the data, the worldwide smoking-cessation effort is working, while Altria's other pet projects have thus far been non-starters.

Although Altria's top line is growing, be careful of concluding the company is converting more consumers into smokers or, for that matter, winning market share.

In its most recent report on the topic, the U.S. Centers for Disease Control and Prevention reported that as of 2019, 14% of the country's residents were smokers. That's down from 20.9% as of 2005. The onset of the pandemic spurred new (or renewed) tobacco usage, but as of the first quarter of this year Altria's tobacco sales were cooling again. Moreover, given the national and worldwide cessation trends in place well before COVID-19 took hold, it would be naive to believe this headwind will stop blowing anytime soon -- if ever. In April the CDC announced new goals aimed at "preventing future generations of smokers." While broad-based, the agency's plans still provide a glimpse of future regulatory pressures.

What about e-cigarette vaping and cannabis? They're not game changers for the company just yet, but perhaps in time.

Smoldering, but not burning

E-cigarettes were heralded as a safe alternative to smoking and smokeless tobacco, but they haven't lived up to the hype. Indeed, the CDC has confirmed a clear link between the use of e-cigarettes and lung injuries, and they've likely caused of dozens of deaths since their advent.  Although that's still not enough to get to get them banned, shareholders are rightfully concerned tighter regulations are coming. In the meantime consumers are curbing their use of e-cigarettes. Teens -- vaping's best customers -- are calling it quits in a particularly big way.

End result? For Q1, Altria wrote down $200 million worth of its initial JUUL investment, noting a loss of market share as well as a sequential 7% decline in sales volume.

The introduction of the IQOS device to the U.S. market in 2019 was supposed to be an answer to vaping's woes. The technology designed by Philip Morris International to be distributed by Altria is once again tobacco-based. Rather than burning it, however, IQOS merely heats it, releasing nicotine without releasing the carcinogens typically created by burning tobacco.

But just last month the International Trade Commission ruled the IQOS device is covered by a British American Tobacco patent, which had been violated by Philip Morris' sale of the device within the United States. The decision doesn't outright forbid the device's sale in the U.S. That's a prospective outcome, however, unless British American and Philip Morris can come to an acceptable agreement. And as fellow Fool.com contributor Rich Duprey notes, it's Altria that "could be most affected."

And cannabis? Recreational marijuana is now legal in 17 U.S. states, while open-mindedness regarding cannabis is materializing in more. Yet Altria has booked sizable writedowns for its waning value of Cronos. It's a microcosm of the fact that the industry hasn't lived up to the hype implied by outrageous valuations seen during the marijuana mania of 2018.

The world is changing in a way that disfavors Altria's core tobacco business. In the meantime -- with the exception of its Anheuser-Busch stake -- the company's owned equity in other vice companies is losing value. Consumers just aren't as interested in cannabis and vaping as they were expected to be just a few years back.

So far it hasn't mattered much, particularly to investors only looking to Altria for income. Read between the lines, though. The underlying earnings are threatened, even if that threat is only slowly materializing and could take years to fully gel.

Bottom line? The current 6.9% yield doesn't misrepresent the company's current fiscal results, so in that regard isn't too good to be true. The above-average yield does, however, indicate an above-average risk you're taking with this stock. Enough investors collectively seem to believe the payout's underlying health is on borrowed time. It might be wise to pay attention.