NASA has big plans for space this year -- and they don't even cost that much.

"If by taking NASA's $19 billion we could solve all of poverty, then I would say, 'Go ahead. Do it.' But it's not. And if that $19 billion were half the budget, then I would agree that half is too much to spend on NASA. But it is actually less than half of one 1/100th of the budget. Just four-tenths of one penny on your tax dollar goes to NASA." -- Astrophysicist Dr. Neil deGrasse Tyson

It's been five years since Dr. Tyson made that point in our interview with the Hayden Planetarium director. Five years later, NASA has published its latest budget request and requested an increase in funding to $24.8 billion. Viewed from one perspective, that's a 30% increase from five years ago, which seems pretty sizable.

But looked at another way, in the context of President Joe Biden's $6 trillion budget proposal for fiscal 2022, NASA's share of that budget...hasn't changed at all. 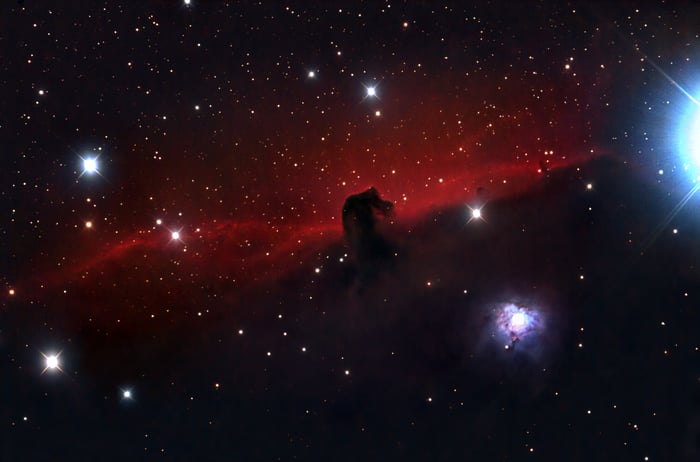 Thing 1: Four-tenths of a penny

And that's the first thing that you, as a taxpayer (and an investor) need to know about NASA's new space budget for fiscal year 2022. Five years ago, out of every tax dollar you paid to the IRS, just four-tenths of one penny went to fund space exploration. Five years later, as it juggles projects ranging from Mars rovers to International Space Station operations to a brand-new expedition to the moon, NASA's still not asking any more than that.

Speaking of that moon expedition -- Project Artemis -- infographics accompanying NASA's budget request make it clear that this is a whole lot more than just a quick there-and-back visit to Earth's favorite satellite.

At least five separate Artemis space launches are depicted in the budget request, along with the construction of a moon-orbiting space station, a "Human Landing System" to take astronauts from the space station down to the moon and bring them back up, a surface habitat to live in, an atomic power station, and a new "Lunar Reconnaissance Orbiter" satellite to help monitor all this activity.

That's quite a lot of stuff your $24.8 billion a year is buying.

Thing 3: "Deep" space doesn't mean what you think it does

Speaking of Artemis, the short trip to the moon falls under the category of what NASA calls "deep space exploration," and it's getting the second most dollars of any major NASA function in 2022 -- $6.9 billion. NASA wants to give Lockheed Martin $1.4 billion this year to finish up its Orion crew capsule program for the moon trip, and to spend $2.5 billion more on the already-over-budget-and-behind-schedule "Space Launch System" that it plans to use to put several pieces of the Artemis program in place.

A further $1.2 billion is budgeted for developing SpaceX's Human Landing System -- about 41% of the lunar lander's total cost.

One of the big objections to the Trump Administration's NASA budgets was the fact that it cut funding for NASA science programs. Now, you might think that anything related to NASA is "science" by definition, but particular programs, especially those concentrating on monitoring the progress of climate change, became targets for the budget ax under the previous administration.

This is changing under the Biden administration. Indeed, the fiscal 2022 budget envisions a 9% increase to science spending -- which will total $7.9 billion, or about 32% of NASA's budget. The new budget particularly benefits contractors performing earth science missions, which receive a 12.5% budget boost, and planetary science missions, whose funding is up 18.5%.

Under earth science, NASA will emphasize using "commercial SmallSat constellations" to gather data on Earth's environment, potentially benefiting companies both private (Planet Labs for example) and soon to be public, such as the NavSight Holdings (NSH) SPAC that is bringing constellation operator Spire Global public. Under planetary science, multiple missions are envisioned to visit various asteroids (the Lucy mission, the Psyche mission) as well as the Saturnine moon Titan (the Dragonfly mission). There will also be a Mars sample return mission as well as delivery of a VIPER lunar rover to the moon.

Thing 5: Meanwhile, back on (or around) Earth

The final big thing to know about NASA's 2022 budget request is that NASA is getting serious about commercializing low earth orbit (LEO) by nurturing the development of "multiple commercially owned and operated LEO destinations." These could include everything from commercial rocket ships such as those being developed by SpaceX, Boeing (BA 1.46%), and Virgin Galactic (SPCE 2.18%) to entire space stations that might be built and operated (and owned) by private companies like Axiom Space.

While NASA wants to increase funding for its own International Space Station by less than 0.5% this year, it's increased its funding request for commercial LEO development sixfold, to $101.1 million.

Granted, this is still a very small piece of the total NASA budget -- but that's the point. Space is going private, with less government spending and more investment by private companies. And the more companies get involved in this new space race, the more chances we'll all have to invest in it.