These Buffett-backed stocks could serve up huge wins for your portfolio.

Warren Buffett became Berkshire Hathaway's CEO all the way back in 1965, a time when the company was valued at roughly $19 per share. The Oracle of Omaha steered the investment conglomerate to legendary success after taking over as its chief executive officer. Today, Berkshire's class A shares trade at roughly $429,700 per share, and the company's returns across Buffett's tenure are even more impressive if you take dividend payments into account.

With that in mind, three Motley Fool contributors have identified three dividend-paying stocks in the Berkshire Hathaway portfolio: Verizon Communications (VZ 1.67%); Mastercard(VZ 1.67%); and Apple (VZ 1.67%). These stocks look poised to continue delivering big wins over the long term. Read on to see why our contributors think that these Buffett-backed, income-generating stocks have what it takes to be standouts in your portfolio. 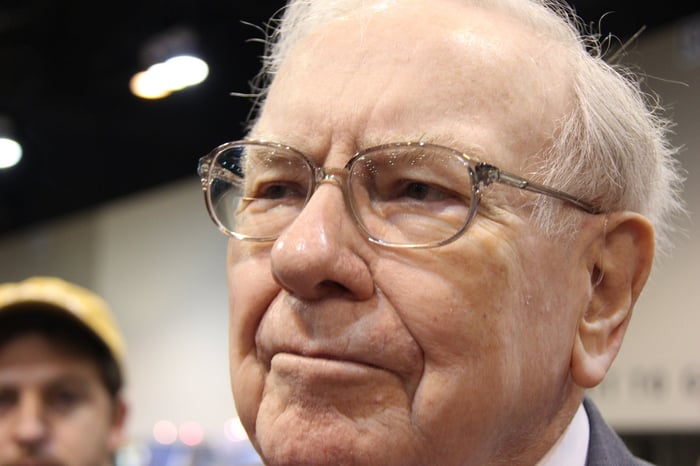 Verizon is a dividend juggernaut

Jamal Carnette (Verizon): Who says Warren Buffett isn't a tech investor? After eschewing the sector for years, Buffett has now invested billions in technology companies, including owning 3.8% of Verizon Communications. At current prices, Berskhire's position is worth nearly $9 billion.

Verizon's dividend has historically been underappreciated. Despite its having a juicy 4.5% yield, many income investors favored the larger 7% payout provided by its telecom competitor AT&T. However, that's about to change.

Earlier this year, AT&T announced it was spinning off its WarnerMedia division and merging it with Discovery with the split occurring next year. As a result, the company was cutting its dividend. While this move might unlock value for AT&T, it also makes Verizon relatively more attractive for income investors in the telecom space.

Buffett is a value investor, and Verizon certainly fits the bill. The company currently trades at 10.5 times forward earnings versus 22.3 times for the S&P 500. Verizon's yield of 4.5% is three times the yield of the greater index, and investors are expecting another increase announcement in September, continuing the streak of raises that has occurred every year since 2006.

Admittedly, Verizon stock has risks. Top-line growth has been difficult to come by, and revenue in 2020 was lower than it was in 2015. The company has significant exposure to landline telephone and cable television businesses, and a significant debt overhang, most of which comes from the $49 billion issuance it undertook to buy out Vodafone's 45% stake of Verizon Wireless in 2014.

Despite that, Verizon's dividend is safe. Last year, the company generated more than $20 billion in free cash flow, more than double dividend payouts. Verizon's predictable, subscription-based businesses will ensure investors can look forward to dividends (and increases) for years to come. Warren Buffett and Berkshire know a strong company when they see one.

Jason Hall (Mastercard): With a dividend yield south of 0.5% at recent prices, investors looking for yield often overlook Mastercard. Ironically, growth investors might also eschew the company, assuming that with a market cap above $351 billion, its growth days are over.

I think investors in either camp are making a mistake to skip Mastercard. Simply put, this stalwart's scale and brand power have it lined up to ride a massive wave of digital-payments growth around the world in the decades ahead.

Mastercard has a massive economic moat in its trusted, well-known payments network that gives it a massive network effect advantage. Having a relationship -- whether as a cardholder, accepting merchant, or a bank that issues Mastercard -- gives you access to the other two. And the more of each that is a Mastercard partner, the more of the others that want access. That's a killer advantage.

This economic moat is why Mastercard's stock has consistently outperformed the S&P 500 on just about every three-, five-, and 10-year period since going public, and is likely to continue outperforming. It's also likely the reason why Mastercard is in the Berkshire Hathaway portfolio.

One last thing: The yield may be low, but the dividend growth is incredible. Here's how much it's increased since being implemented, juicing Mastercard's total returns an extra 570%: 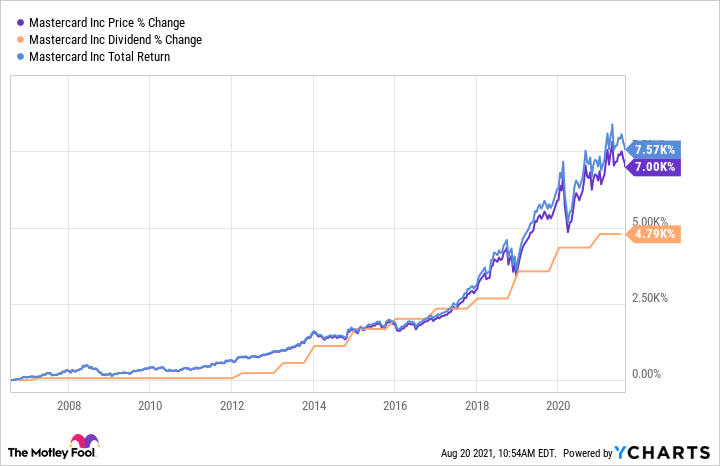 That's a lot of juice from a relatively low dividend yield, powered by incredible growth.

Keith Noonan (Apple): The company has been on an incredible run. It's posted a total return of roughly 675% over the last decade, with gains spurred by strong sales for its hardware and impressive growth in the software and services space. In light of that gravity-defying performance, it's not unreasonable to wonder whether the tech giant still has room for big growth.

Apple already has an eye-catching market capitalization of roughly $2.45 trillion, and it sits atop the list of the world's most valuable companies. While relative growth will be tougher to come by as the company continues to increase in size, Apple still has an unmatched position in the consumer electronics industry. Technology will only become increasingly important in the average person's daily life, and Apple is fantastically positioned to capitalize on some of the world's biggest emerging technology trends.

The company's phones and tablets will play a huge role in ushering in the age of 5G networks, which will enable dramatically faster upload and download speeds that make new kinds of software applications possible. Apple is also likely to be a leader in the augmented reality (AR) space. Next-generation network technology will help pave the way for new AR hardware and software applications, and Apple's current leadership position in mobile and wearable computing suggests that the company is likely to be one of the biggest winners if augmented reality takes off.

With the company's dividend yield coming in at roughly 0.6% despite years of strong payout growth, it might come as a surprise to hear that Apple's dividend posted a much greater yield at earlier dates. Consider that the stock yielded more than 2.6% for a stretch of time back in 2013. Apple has boosted its payout 132.5% since it began paying a dividend in 2012, but market-crushing capital appreciation has outpaced payout growth. Not to worry. The technology leader should be able to continue posting strong earnings growth and hiking its dividend payout, and long-term investors will likely see strong impressive returns from the stock.