Despite short-term challenges, Starbucks's ability to generate revenue growth from its existing stores, as well as open an average of six net new stores a day, indicates that its core business is doing just fine. Here are five reasons investors should look seriously at Starbucks stock now. 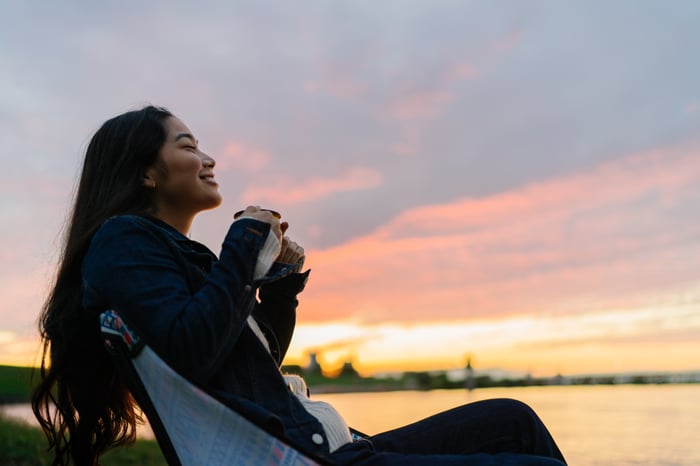 Starbucks posted record quarterly revenue of $8.1 billion, driven by a 22% year-over-year increase in U.S. store sales. The bad news is that China store comps decreased by 7%, partially due to COVID-19-related issues. However, the company was still able to grow global store sales by 17% compared to the same quarter last year.

Starbucks' impressive North American figures illustrate how strongly the company can perform as pandemic-related headwinds subside. Said Starbucks COO John Culver: "What we're seeing from a behavior standpoint are very similar behaviors from customers as we've had in prior quarters and pre-COVID. So routines are beginning to normalize."

Starbucks was pressured to close in-person stores and shift its focus toward drive-thru and contactless transactions during the height of the pandemic. The bright side is that the company has retained a lot of that drive-thru volume so far in 2021, which bodes well for the launch of smaller stores that focus exclusively on grab-and-go ordering. "Today drive-thru and MOP [mobile order and pay] accounted for 70% of transactions, which is up 15% versus pre-pandemic levels," said Culver.

There's a reason Starbucks is the No. 4 food and drink app on both the Apple Store and the Google Play Store. Since launching in 2015, Mobile Order and Pay (MOP) has grown to become one of the company's main catalysts for growing same-store sales. MOP speeds up transactions; increases convenience for customers in-store, curbside, and drive-thru; and makes ordering specific drinks easier than ever before. Removing the hassle of having to wait in line to order, plus wait time for drinks and food to be made, makes it more pleasant to visit Starbucks, encouraging more frequent orders. The coffee giant makes its margins from fancy beverages, and MOP effectively makes it easier to go crazy with customized concoctions.

3. A loyal and growing rewards program

Like any store, restaurant, or retail outlet, Starbucks gets occasional one-off customers that are just passing through. But the bulk of its business comes from repeat buyers. Starbucks is tapping into its existing customer base through MOP, a heightened focus on drive-thru, and the power of its rewards program. By encouraging customers to spend more per transaction and increase the frequency of their visits, it's paving a path toward higher profitability, independent of growing store count.

Starbucks is investing in its employees by bumping up wages. "Next summer, hourly partners in the U.S. will make an average of nearly $17 an hour, with barista rates ranging from $15 to $23 an hour across the country," said Johnson. Added costs will undoubtedly weigh on Starbucks' margins, but the company still expects to grow revenue in FY 2022 by 11.8% to 13.6% -- all while sustaining a 17% operating margin. However, Starbucks expects its operating margin will improve to between 18% and 19% by FY 2023. Put another way, Starbucks can absorb higher wages without impacting profitability over the medium to long term.

Offering workers higher wages allows Starbucks to capture and retain talent, which matters given the very tight labor market in the U.S. For example, FedEx told investors during its most recent earnings call that it was going to struggle to find enough workers to meet demand this holiday season.

Starbucks is committing $20 billion toward share repurchases and dividends over the next three years. The company just raised its annual dividend to $1.96 per share, representing a nearly 10-fold increase in its payout since the company began distributing dividends in 2010. This also marks the 11th consecutive year Starbucks raised its dividend. With a current yield of 1.9%, Starbucks has become a blue chip dividend stock, providing investors income as a cherry on top of a company with strong fundamentals.

A great business to buy now

When top-tier stocks like Starbucks go on sale over short-term concerns, it's usually a good time to buy. Starbucks isn't the fastest grower, the best value, or the highest dividend payer. But it features a rare blend of all three traits, making it one of the most balanced foundational stocks for a future-proof portfolio.