The company has begun deliveries of the Air sedan and is on track to meet its 2022 milestones.

Electric vehicle maker Lucid Group (LCID -0.51%) reported on Nov. 15 that it lost $524.4 million in the third quarter, or $0.43 per share, as it ramped up the start of production of its first vehicle. Revenue was just $232,000; Lucid didn't begin deliveries of its vehicles until after the end of the quarter.

While that was a wider loss than Wall Street had expected, the stock rose sharply in after-hours trading after the news was released. Analysts polled by Thomson Reuters had expected Lucid to report a loss of $0.25 per share on revenue of $1.25 million. 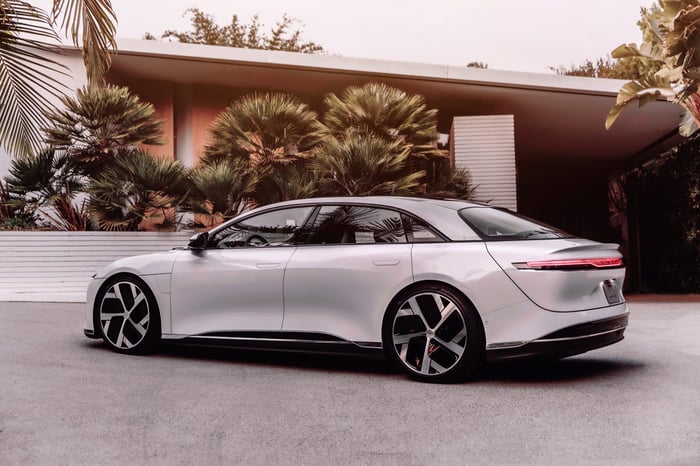 Lucid said that it spent much of the quarter refining its manufacturing quality and preparing for the official start of production of the Air luxury sedan, its first product, which happened in late September. It hit several key milestones along the way.

In a separate development on Monday, the Air was named Car of the Year by Motor Trend magazine.

What Lucid's CEO had to say

Rawlinson began the earnings call by outlining what he sees as the opportunity for electric vehicles, and for Lucid's luxury-level positioning within the EV universe.

As we continue to bring Lucid Air to market, it's clear that the opportunity we have in front of us is massive -- because the market opportunity is not just for electric vehicles, it's for vehicles overall.

We believe that the growing customer sentiment for electric vehicles, coupled with the government mandates encouraging their adoption, provides significant support for the EV industry overall and for Lucid's position within it.

Looking ahead: Lucid's production target for 2022

Rawlinson reiterated Lucid's goal of producing 20,000 vehicles in 2022, but said that electric vehicle investors should note that "this target is not without risk given ongoing challenges facing the automotive industry, with global disruptions to supply chains and logistics."

He said that Lucid is taking steps to mitigate those risks, however, and that the company is currently on track to launch lower-level trims of the Air in 2022, as expected.

CFO Sherry House added that Lucid has ample cash to fund its expansion plan at least through next year.