Just one week into its tenure as a publicly traded company, and there's no denying that Rivian Automotive (NASDAQ:RIVN) has made history.

Rivian's stock has gone up every day since its IPO. The company is now worth nearly $150 billion, roughly the same as Ford (NYSE:F) and General Motors combined, becoming the second most valuable U.S. automaker behind Tesla.

Whether you're looking to buy Rivian stock, are firmly skeptical, or just want to hear both sides of the argument, you've come to the right place. Here's a deep dive into the bull case and the bear case for Rivian stock to help you decide whether to add the new kid on the EV block to your portfolio. 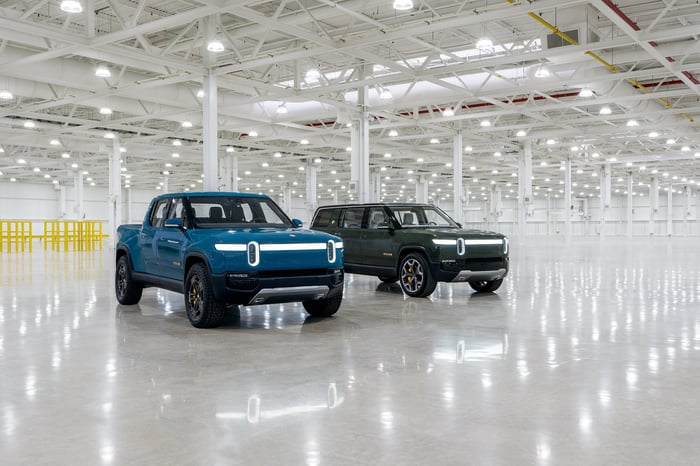 Howard Smith: Many EV start-ups are counting on a fast-growing transition from internal combustion to electric-powered transportation. That shift is underway and seems likely to continue. But the growing list of EV manufacturers will have to compete for that business among customers, and for the publicly traded names, among investors. Rivian is the latest entry in the group of public EV makers, and investors have been diving right in.

The stock has more than doubled from its IPO price of $78 per share. That kind of move has some investors thinking it may be smart to wait for a pullback before buying in. I can't fault that approach, but there are also good reasons to think that at least starting a position will be a good move down the road.

That's because Rivian doesn't just have solid financial backing, it also has its own ready-made market that is as solid as they come. Its financial backing has come from several funding rounds over the past several years. In Feb. 2019, Amazon (NASDAQ:AMZN) led a $700 million funding round, and that was followed by a $500 million investment from Ford not long thereafter. Then, in Sept. 2019, privately held Cox Automotive announced a $350 million investment. Subsequent funding rounds also followed leading up to last week's IPO.

The importance of those stakeholders isn't just the capital they injected. Ford can provide manufacturing expertise, Cox plans to collaborate with Rivian on logistics and service, and Amazon has already placed orders for 100,000 electric delivery vans from Rivian. So while Rivian is already valued significantly higher than Ford, there's reason to believe that it is set up to grow into that valuation as long as it executes. That's reason enough to think that Rivian is one EV stock that has the odds in its favor for long-term success.

Too much uncertainty for the price

Daniel Foelber: Raising an eyebrow or two at Rivian's lofty valuation isn't unwarranted given the company is even more unproven than other up-and-coming EV companies like Lucid Group and Nio. However, one of the reasons why it's best to steer clear of Rivian is that the management team hasn't proven itself on the public stage. 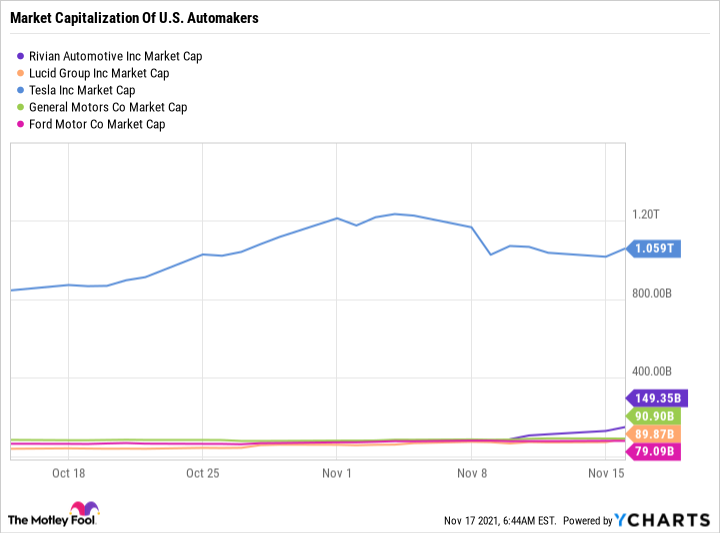 Despite investment from Ford and Amazon, Rivian has yet to host its own earnings calls and operate under the watchful eye of Wall Street. The first few quarters can be critical to see how management will use the $12 billion in cash it generated from its IPO.

Another red flag for buying Rivian stock is the unknown threat of competition. There's no denying that Rivian has an exciting product with a lot of potential in a niche yet growing segment of the EV market. While some may argue that the Tesla (NASDAQ:TSLA) Cybertruck and the Ford F-150 Lightning are direct competitors to Rivian's R1T truck, Rivian deserves credit for building a truck that is better suited for off-road and rugged terrains.

Rivian's delivery truck is loosely challenged by competitors like Workhorse and others, but no competitor has the order backlog that Rivian does. Rivian may have a head start in a fresh new market, but no one knows how it will hold up as the market matures. Simply put, Rivian's management team, products, and status as a public company are all untested -- and that in and of itself warrants a fair share of skepticism.

Finally, the single biggest reason why Rivian stock is worth avoiding is the company's unproven manufacturing, ability to deliver and service its vehicles, and the unknown cost of its charging network. Like Tesla, Rivian plans to build out its own fast-charging network because it believes it's an imperative service for its remote clientele. It remains to be seen how that added cost will affect its profitability. Investors may remember it wasn't long ago that Tesla had an amazing product but was drowning in a sea of production challenges. Building a great car is one thing. Mass producing and delivering it is a completely different skill. Given the laundry list of uncertainty, and Rivian's nosebleed valuation, there's simply isn't a good enough reason to buy the stock today.

An ever-changing dynamic of pros and cons

Like most new companies, Rivian faces its share of supporters and doubters. And while our contributors may differ on if Rivian is a buy now, both agree that the electric vechicle stock has a lot of potential. The EV industry is arguably one of the most attractive places for long-term investments.

Rivian may be an expensive stock now. But if the company hits its targets or its price comes back down to earth, then some bears may turn bullish. On the flip side, if Rivian's valuation strays too far from its fundamentals or the company delays deliveries, then the bull case could begin to crack.