Ford managed to grow its sales despite headwinds

While supply chains remain crimped and a variety of swirling economic and logistic factors are hampering the automotive sector, Ford reports its total vehicle sales rose 5.9% in November. Strong commercial vehicle sales, up 42% YOY, helped redress the balance in some areas with weak retail sales. SUVs, up 25.6% YOY, and EVs, which jumped 221.2%, produced the strongest retail sales. The company also reported November orders for 74,000 vehicles for future delivery, compared to just 10,000 in November 2020. 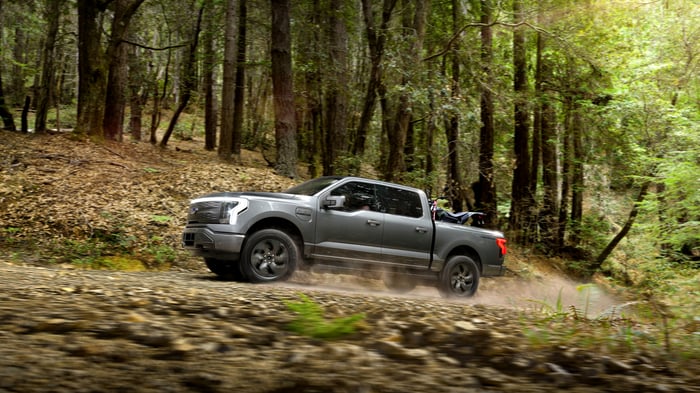 Potentially key for the upcoming launch of the Ford F-150 Lightning all-electric pickup truck, the F-series pickup continued its long-term popularity. Pickup sales jumped 15.8% YOY, and the Blue Oval's press release made sure to highlight the fact that the F-series is the "best-selling pickup truck for the 45th year in a row." It also noted average "[buyers] are younger with over a quarter of them between the ages of 18 to 35 years old" for the freshly launched Maverick pickup.

Cars, however, were a weak point in the sales report. While powerful growth in truck and SUV sales managed to offset the negative pressure overall, car sales fell 65.9% YOY for November and plummeted 64.9% year to date.

For investors who believe EVs are the wave of the future, destined to sweep away internal combustion engine (ICE) transport as thoroughly as gasoline autos swept away the horse and buggy, Ford's November sales report contains some juicy tidbits.

While Ford's electric Mustang Mach-E crossover SUV may surpass 2021 sales of the Chevrolet Bolt EV manufactured by General Motors (NYSE:GM), this is trivial news that might make a few headlines but has no real business significance. The real high-voltage news is contained in the details of Ford's EV sales growth compared to the overall market and in its important market share gains. Its November EV sales exploded 153.6%, which Ford claims is triple the EV sector's overall growth rate.

Ford is also winning more market share with its EVs. Its EV market share just passed 10% -- nearly doubling last November's 5.4%. Significantly, it is probably winning this share away from maverick market leader Tesla, whose second-quarter market share dropped from 79.5% in 2020 to 66.3% in 2021, according to Experian research quoted by Green Car Reports. That same data highlights that Tesla's most successful current market is in the luxury segment, now outselling Mercedes-Benz, the famous top-end subsidiary of Daimler AG (ETR:DAI).

Given that Ford's main near-future EV release, the Ford F-150 Lightning, is not a luxury vehicle but is, in fact, an electric version of the everyday "workhorse" F-series pickup, Ford isn't going head-to-head with Tesla in its area of strength. With Tesla being strongest in the luxury segment, Ford appears to have the potential to make significant market share gains by competing in its own area of competence: reliable, affordable vehicles for ordinary drivers. The previously noted continued success of the F-series also bodes well for the rollout of the Lightning.

How is the road ahead looking for Ford?

Importantly, beyond its November sales successes, Ford is taking steps to strengthen its financial position long term. It's buying back approximately $5 billion in "junk bonds" issued during the 2020 COVID-19 crisis, a move likely to help it regain investment-grade ratings with the three main rating agencies. Regaining an investment-grade rating will help it secure better financing in the future and make its stock available for purchase by institutional investors again.

It's also parting ways with EV start-up Rivian Automotive (NASDAQ:RIVN), signaling its EV development and manufacture is now advanced enough to no longer require outside help. Its gigantic Blue Oval City EV factory and multiple EV battery plants, part of an $11.4 billion investment, will equip it for large-scale electric vehicle manufacture. The company could also secure billions in non-loan cash if it chooses to liquidate its Rivian position once the Rivian initial public offering (IPO) lock-up period expires.

No single piece of news is a "magic bullet" solving all of Ford's long-term problems as a legacy automaker. However, its improvements and successes are puzzle pieces that, together, reveal a strong push toward future long-term growth, profitability, and share value. With its EV program shifting into high gear, Ford is likely on the high road to becoming one of the 21st century's leading electric car stocks -- and well worth considering as an investment.