Milk and milk companies are something you shouldn't generally buy on discount.

Dean Foods (DF) missed analyst earnings estimates by a single penny recently, which ordinarily I wouldn't make much of a big deal over. In fact, the 8% sell-off the next day probably had more to do with the company's painfully bleak outlook, in which management highlighted several factors that will slow business performance, leading to full-year earnings that are expected to be flat at best, but may fall by as much as 15%. And yet, some analysts are turning contrarian and making the case that the major milk maker is not sour.

Nearing its expiration date?
Management highlighted no less than four problems working against the company in the recent earnings release.

First, raw milk prices are at all-time highs right now. Last quarter, management expected prices to fall somewhat before rising again near the end of 2014, but that hasn't played out. Prices have simply continued to climb, largely because of demand from China, whose domestic milk production has been constricted by weather and other factors.

Second, Dean lost a huge customer in 2013. My colleague Michael Lewis is coy about that customer in his defense of Dean, referring to it as just "a very big one." Well, when it comes to grocery items, it's just about the biggest -- Dean lost its contract with the juggernaut Wal-Mart, it's single biggest customer and one of the biggest players in the industry.

Third, Dean isn't the only milk company suffering. Industry volumes were down 2.2% in 2013, with higher prices and a reduction in Supplemental Nutrition Assistance Program benefits having a negative impact on domestic demand. While reductions in SNAP benefits are an ongoing political issue at the moment, declining milk demand is not a new problem. My attempts at the GOMAD diet notwithstanding, milk demand has fallen 25% since 1975, and it's been pretty constant and gradual, making it hard to say where the bottom will be or if the industry can recover in the long-term. 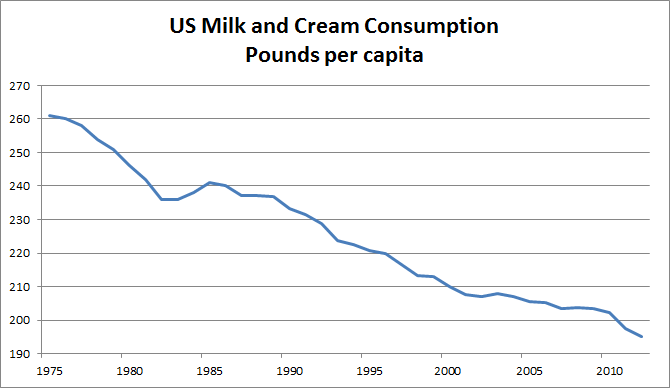 Finally, as if all that weren't enough, Dean is planning on intentionally hurting its performance by giving out higher incentive bonuses this year. The company admitted that because 2013's performance was below targets, it underpaid bonuses to executives, which it intends to make up for this year, despite its own expectations of having another bad year.

Maybe it's still good?
Despite all this, some investors are looking for the bright side. As I noted above, fellow Fool Michael Lewis made a good case recently, noting that the company is taking steps to cut costs, including closing eight of its processing plants, and that valuation metrics for the company are extremely low.

I'm still skeptical. It's great that the company is closing plants to control costs, but I find it somewhat hypocritical that even as it closes plants and cuts jobs in the process, management is planning on increasing incentive bonuses, which it outright admits will be "a drag on financial performance in 2014."

And while raw milk costs may come down eventually, returning the company to a higher level of profitability, there's no getting around the fact that Dean is a pure play on milk demand, which has been in decline for decades. Before Dean spun off WhiteWave Foods, there was some hope the ship could not only turn around but change course to where the growth is, but that's no longer in the cards. While Dean is struggling to stay afloat, its former subsidiary recently posted 11.5% sales growth for 2013, driven by increased volumes on all of its products. It's no wonder Dean's CEO at the time jumped ship to run WhiteWave instead.

As for Dean's low valuation, it's true Dean's enterprise value is hovering around five times EBIDTA, but sometimes companies get that cheap for reasons beyond simple investor fear. This is one value trap I suggest avoiding.