The struggles of Nintendo's (OTC:NTDOY) Wii U console have been well documented. The company held fast to pie-in-the-sky sales projections despite all evidence to the contrary, finally cutting the projections before the earnings release that would reveal the console's real figures (leading to not only an apology, but also pay cuts for key executives). Many wrote the console off early, and signs point to it merely being a footnote in the history of gaming.

There is a small glimmer of hope, however. Even though it's unlikely that anything could make the console a major hit at this point, there are a few potential "must have" games with the potential to grow Wii U sales. One of these, Mario Kart 8, is set to be released on May 30. Will people buy a Wii U just to play the latest "Mario Kart" game, though?

Building on a legacy
Nintendo's "Mario Kart" franchise is one of its more popular offerings, and each of the company's consoles since its debut has received only one entry in the series. Mario Kart Wii, the most recent version, sold 300,000 copies on release day in Japan alone, and had sold over 35 million copies worldwide as of the end of 2013. Given the game's replayability and loyal fanbase, Nintendo is hoping that the new game's release will be a tipping point for Wii owners who haven't purchased a Wii U yet. 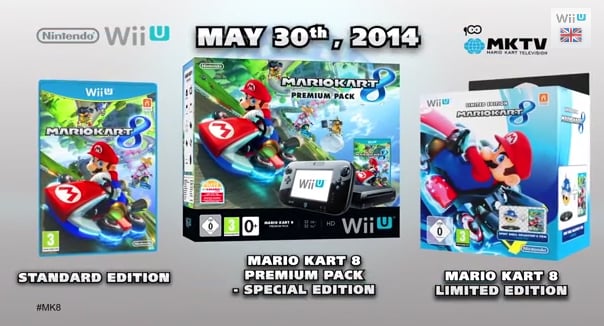 In Europe, where Wii U sales are practically nonexistent, Nintendo is significantly increasing its marketing of Mario Kart 8 in hopes that the popularity of previous games in the series will spur console sales. In addition to the standard edition of the game, the company is releasing a limited edition version that comes with a "Blue Shell" figurine and is also releasing a special edition bundle.

Online play may encourage upgrades
Mario Kart 8 is a beautiful game, both graphically and in terms of how it seems to take some of the most popular features from previous games and combine them seamlessly. More importantly, though, it offers something that was considered one of the mainstays of Mario Kart Wii: online play. This is significant, since online play for Mario Kart Wii and other Wii-era games is ending on May 20 (which is conveniently 10 days before the release of Mario Kart 8).

This means that for those who want to play "Mario Kart" online, they will need to either play Mario Kart 7 on the Nintendo 2DS/3DS or purchase Mario Kart 8 when it comes out. Nintendo is obviously hoping that customers will opt for the latter, and at least some fans will. It's speculated that Amazon.com had to temporarily halt its preorders of the game because it had already allotted all of its ordered inventory; if this is the case, it bodes well for the game's release sales figures.

In case you forget that it's a Nintendo system
Positive buzz for Mario Kart 8 and anecdotal evidence about preorder sell-outs certainly has the game looking like the biggest hit to date for the struggling Wii U, and it very well could encourage console sales (though to what extent remains to be seen). When you add in the upcoming Smash Bros. Wii U title, there's a good chance that 2014 will be the best year that the console has had. The company's trying its best to increase the appeal of the system on the back of major first-party titles that are finally starting to come out, not only bundling popular games with consoles but also introducing new accessories that play up the "Nintendo" feel of the system.

In addition to the "Mario," "Luigi," and "Princess Peach" Wii Remotes that the company has released, a "Yoshi"-themed Wii Remote is scheduled for release alongside Mario Kart 8 (in Europe at least, but the controller will likely see release in the rest of the world as well). While there has been no word on additional themed controllers, it's possible that Nintendo will release similar accessories alongside future "Zelda" games or as tie-ins to other major franchises. The intention is obviously to cater to the loyal Nintendo fans who didn't see a reason to upgrade from the Wii; it sends a message that the new console is fun, and when paired with games like Mario Kart 8 it may help to sell a few extra accessories.

Is the Wii U just spinning its wheels?
Mario Kart 8 will likely be the biggest hit on the Wii U to date, but that doesn't necessarily take a lot. Between it and Smash Bros. there will probably be at least somewhat of a surge in Wii U console sales simply because both games are popular, fun, and have great replayability both online and offline. The biggest fans of the franchises will likely break down and buy a Wii U if they haven't already, especially if they can get one of the games bundled with the purchase. That will provide the console with some growth and a larger install base to take advantage of its eShop and other existing games.

The problem is that there's a limit to this growth potential. Mario Kart 8 may draw in some gamers who haven't played previous games in the series, but for a lot of people it simply won't be enough to justify buying the Wii U. Nintendo's system will keep limping along until its next hardware release, but even the great-looking games that are set for release soon likely won't be enough to turn its fortunes around.

Can the New Mario Kart 8 Save Nintendo's Wii U? @themotleyfool #stocks $NTDOY Next Article
Current