Nintendo (OTC:NTDOY) just announced an unusual advertising partnership with Daimler's (OTC:DDAI.F) Mercedes-Benz, which will upgrade Mario's go-kart in Mario Kart 8 with a considerably posher Mercedes GLA SUV. The Mercedes GLA will be offered via a free DLC (downloadable content) pack in Japan later this year.

Mercedes-Benz Japan has already released a bizarre commercial featuring the mustachioed plumber driving an 8-bit Mercedes-Benz GLA out of the original 8-bit Super Mario Bros. and emerging from his SUV in live-action form.

This degree of in-game product advertising is rare for Nintendo, which has traditionally shied away from product placements in its first-party video games. However, desperate times call for desperate measures -- Nintendo posted a net loss of 33.4 billion yen ($329 million) last quarter and only sold 310,000 Wii Us worldwide. During those three months, Sony (NYSE:SNE) was selling an average of a million PS4s monthly.

Nintendo has sold 6.2 million Wii Us since November 2012, but the console has fallen behind Sony's PS4, which has already sold 7.8 million units since launching last November.

Is Nintendo about to tumble down a slippery slope?
Analysts have frequently advised Nintendo to sell mobile games, produce first-party software for rival consoles, and to add more microtransactions to its games. Nintendo has refused to do all three, instead opting to sell interactive figurines and sign more licensing deals to boost its top and bottom lines.

Nintendo plans to sell near-field communication (NFC) figurines similar to Activision Blizzard's Skylanders and Disney's Infinity toys, which communicate with games via embedded chips. For example, a Mario figurine placed on a pedestal would appear in the accompanying game as a playable character.

On the licensing front, President Satoru Iwata believes that deals like the one with Mercedes-Benz will become earnings accretive in the "not so distant future." Yet it's easy to see Nintendo tumbling down a slippery slope that could eventually tarnish its flagship franchises with tacky advertising. Will Link stun enemies with a Nerf boomerang? Will Mario start eating Burger King hamburgers instead of mushrooms to power up?

The business of in-game advertising
At least Nintendo's approach, in offering Mario's Mercedes SUV as an optional free DLC, is more subtle than what other publishers have done.

In-game advertising (IGA) is a rapidly growing business. Back in 2009, the IGA market was worth $699 million, but it is expected to hit $1 billion by the end of this year. However, gamers are now less forgiving of obvious in-game product placements than they were in previous years. In March, some gamers harshly criticized a video ad for Disney/Dreamworks' Need for Speed film on the launch page of Electronic Arts' Battlefield 4, calling the promotion "pathetic" and "unbelievable."

With the production cost of modern triple-A titles now regularly topping $100 million, publishers will likely increase the amount of in-game ads as budgets climb. Yet just like in films, in-game ads need to be subtle and tasteful to be successful.

Boosting cash but avoiding the real problems
The problem is that Nintendo's licensing strategy is just a short-term solution aimed at preserving Nintendo's bottom line. It offers no real long-term solutions for its three fundamental problems -- the company's favoritism of the more popular 3DS, the Wii U's lack of strong third-party support, and a consistently weak marketing campaign for the Wii U. 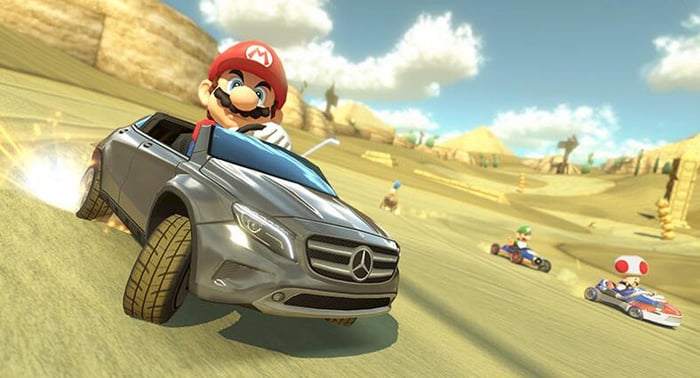 Nintendo needs to make bold moves -- such as acquiring a third-party publisher, releasing new IPs, or launching a fierce marketing blitz -- to mount a real comeback. Letting Mario cruise around a go-kart track in a Mercedes might seem like a cute way to boost cash, but it also makes the company look desperate and unwilling to face its real problems.

Mario Trades in His Go-Kart for a Mercedes in Mario Kart 8 for the Wii U @themotleyfool #stocks $NTDOY $DDAI.F $SNE $YUM Next Article
Current