There's a reason for that, and it's more obvious than you might think. 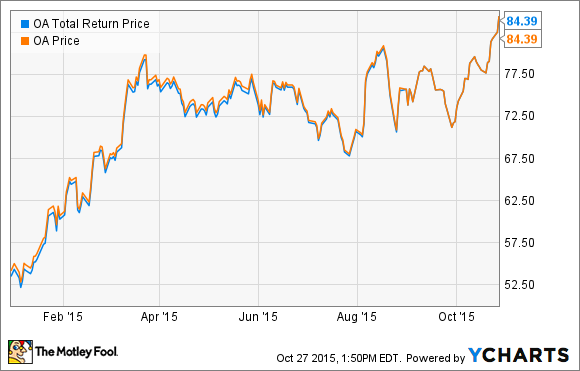 "No good deed goes unpunished," goes one cynical truism. A corollary to that might be that sometimes, an undeniably good deed will go unrewarded -- and I suspect Orbital ATK (OA) shareholders will agree that Tuesday was such a day for their company.

On Tuesday, you see, Orbital released its fiscal Q3 earnings results, and they were far and away better than almost anyone expected. For Q3 2015, Orbital reported:

For an industrials company like Orbital ATK, that all comes close to fitting the definition of a blowout quarter. And to top it all off, Orbital upped its guidance for the rest of this year. Based on its latest numbers, management now says it expects to produce as much as $4.5 billion in revenues, earn at least 10.75% operating profit margins on those revenues, and drop at least $4.75 per diluted share down to the bottom line as a result. On just about every line item, these predictions exceed what Orbital ATK was promising investors just three short months ago.

More good news to come
Guidance, of course, is just words -- until it becomes reality. More important than the guidance Orbital is giving us are the order numbers that it's already produced. And in addition to the earnings, revenue, and free cash flow already booked, Orbital CEO David Thompson noted that the third quarter of 2015 saw Orbital ATK rake in "near-record new orders."

These $2.8 billion in "new firm and option" bookings exceeded revenues booked in the quarter by nearly one-and-a-half times (a 2.49 book-to-bill ratio), and promise accelerating revenues going forward. What's more, with Orbital ATK backlog now standing at $8.7 billion (firm) and $13.8 billion (including yet-to-be-exercised options, "undefinitized" and "indefinite quantity" work), Orbital now has enough business "in the bag" to keep it busy for more than two years at a minimum, and nearly four years at maximum, at historical revenue rates.

Valuation
Every silver lining contains at least a scrap of cloud, and at Orbital ATK, the bad news clouding all of this good news is the stock's valuation. Priced at 26 times trailing earnings according to S&P Capital IQ data, but expected to grow earnings at "only" 18% annually over the next five years (according to Yahoo! Finance), Orbital ATK stock already incorporates all of the good news described above -- and more.

If there's a reason that Orbital ATK's stock price moved only 2.6% higher on truly magnificent results Tuesday, it's most likely simply this: The stock already costs about as much as it's worth.