A stock's historical variance measures the difference between the stock's returns for different periods and its average return. A stock with a lower variance typically generates returns that are closer to its average. A stock with a higher variance can generate returns that are much higher or lower than expected, which increases uncertainty and increases the risk of losing money.

Let's go over how to calculate the historical variance of stock returns as we work through an example step by step.

Step 1: Select the period and measurement period over which you wish to calculate the variance
There are two things you need to determine before you start the calculation:

The choice of time unit and your measurement period will depend on your goal in calculating the variance in the first place.

Discussing these choices is well beyond the scope of this article, so for the purpose of the following example, we'll start with our data set as a given. We'll calculate the historical monthly variance of the S&P 500 Total Return Index over a five-year period from August 2010 through July 2015 -- that's 60 observations (5 years x 12 months).

Here's the formula for variance:

Wow, that looks really complicated. Let's start with a translation in English: The variance of historical returns is equal to the sum of squared deviations of returns from the average (R) divided by the number of observations (n) minus 1. (The large Greek letter sigma is the mathematical notation for a sum.)

That still sounds very complicated, which is why we're going to work through an example, and because no one in this day and age would calculate a variance by hand, we'll use Microsoft Excel.

The following screenshot of our Excel spreadsheet shows our starting data set. Column B, from Rows 3 through 62, contains our monthly return series for the S&P 500 Total Return Index for the period from August 2010 through July 2015: 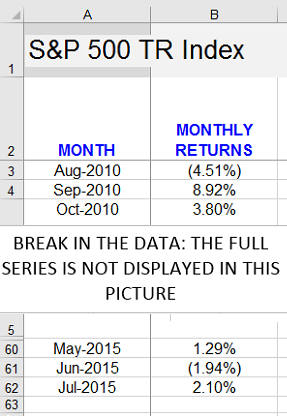 Here, n is the total number of observations.

We calculate the average using Excel's "Average" function. The result, 1.32%, is in cell C65. (The exact Excel formula we use is displayed in the cell immediately to the right.) 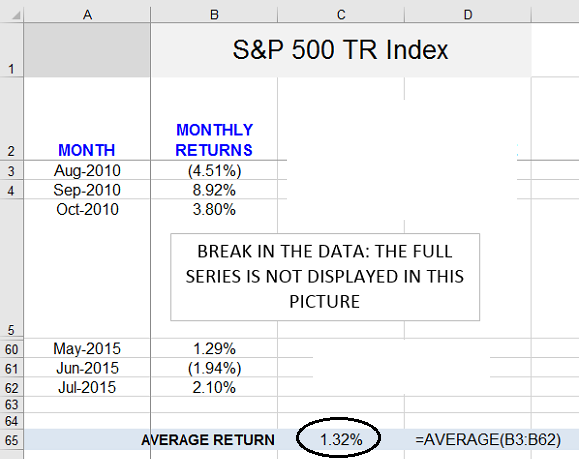 Step 3: Calculate the difference between each of the individual returns and the average return
This step occurs in column C: 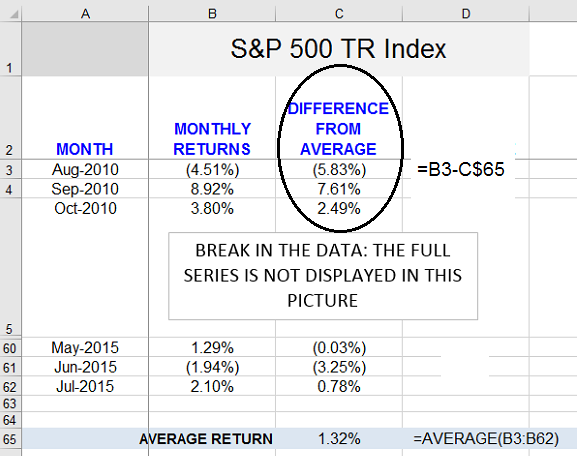 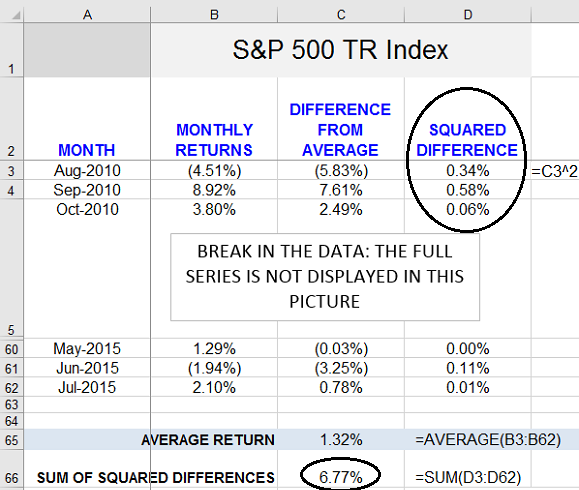 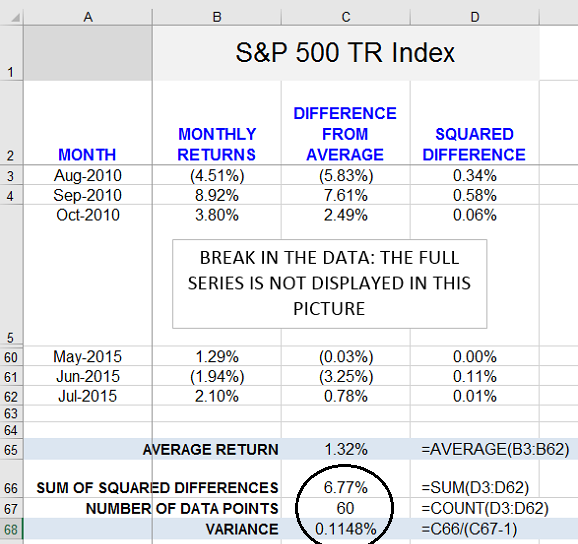 You can confirm with a calculator that:

Is there an easier way to do this?
Yes, there is! Excel has a variance function, "VAR," which calculates the variance of a set of numbers directly, eliminating the need for all those intermediary steps, which are pretty tiresome. The result is in Cell C70 below: 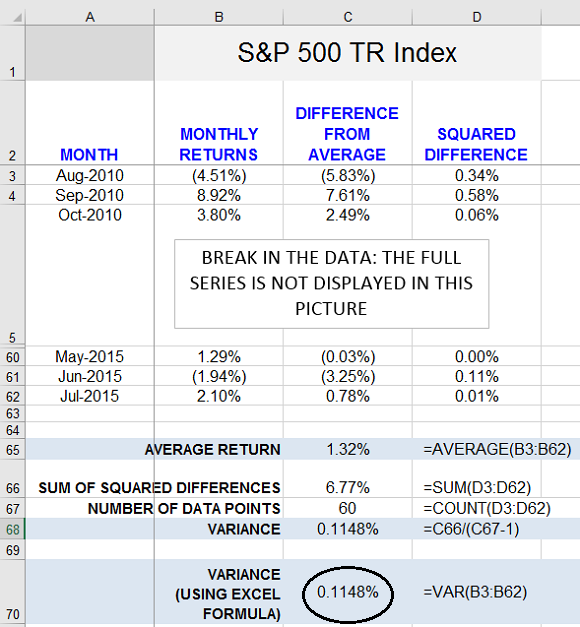 Note that the result matches the one we derived independently, which is comforting.

That's it! You now know how to calculate the historical variance of a return series.

Suffice it to say that variance of returns is one of the two building blocks of the mean-variance framework, also known as "modern portfolio theory," that economist Harry Markowitz introduced in 1952, for which he was later awarded the Nobel Prize. Mean-variance analysis enables investors to construct a portfolio of assets that maximizes expected return for a given level of risk. In this framework, risk is defined by the variance of returns.

Want to find the right broker for you? Pop over to The Motley Fool's Broker Center and get started today.