This key document is common among businesses. Here's what it's all about.

All businesses have key strategies, assets, or data that give them an edge over the competition. It's this pivotal information that allows them to continue being profitable. But what happens when a company's trade secrets are leaked to a competitor? Suddenly, that company loses its edge, and with that, down go its profits. That's why so many businesses insist that their employees sign non-disclosure agreements, or NDAs.

Also known as a confidentiality agreement, an NDA is a binding contract that prohibits one party from sharing specified information about a company or second party. An NDA might include items such as proprietary systems, internal research and data, and even marketing materials. Violating an NDA can have serious legal consequences, so if you've signed a document banning the disclosure of key information, it's important that you keep it under wraps. 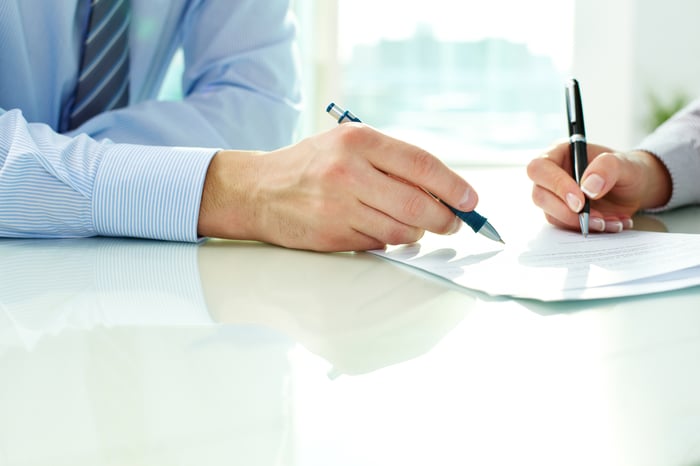 Companies make employees sign NDAs in order to protect trade secrets and other information that, if made public or shared with competitors, could impact their long-term viability and profitability. An NDA might cover information such as:

When you sign an NDA, you're agreeing not to disclose any of the information specified in that document, or otherwise risk having legal action taken against you. Typically, NDAs are only designed to cover particularly sensitive or proprietary information.

Say you work at an online marketing company. If your firm has developed its own algorithm for targeting consumers, you'll probably be prohibited from sharing that formula with outside parties. But if your company also uses a well-known tool like Google AdWords to target customers, that probably won't fall under the scope of its NDA. The reason? Google AdWords is a tool that's widely available, and it's one that's commonly used among marketers. It's by no means a trade secret unique to any single company.

Most NDAs will contain the same basic information, such as:

If you're presented with an NDA, it's critical that you review its terms carefully and make sure you understand what's expected of you. The more familiar you are with that document, the less likely you are to violate it inadvertently.

It's common for an employee to be asked to sign an NDA as well as a non-compete, and while the two often go hand-in-hand, they're not the same thing. An NDA prohibits employees from disclosing key information, while a non-compete prohibits employees from working for competitors, or engaging in competing business activities, for a certain time period. In other words, if you sign an NDA, it means you can't share certain information about your old company with your new employer. If you sign a non-compete, you may not be able to work for that new employer in the first place.

Whether it's an NDA or another legal document, it often pays to consult with an outside attorney before agreeing to its terms. Like all contracts, NDAs are sometimes negotiable, and if yours is overly restrictive, it could put you in a precarious situation and expose you to legal repercussions.

TThis article is part of The Motley Fool's Knowledge Center, which was created based on the collected wisdom of a fantastic community of investors. We'd love to hear your questions, thoughts, and opinions on the Knowledge Center in general or this page in particular. Your input will help us help the world invest, better! Email us at [email protected]. Thanks -- and Fool on!