Not every company offers a 401(k), but many workers have the option to participate in an employer-sponsored retirement plan. But what if you're self-employed and don't have access to a company-sponsored 401(k)?

Thankfully, you still have some retirement savings options, one of which is the solo 401(k). Also known as a uni-k, a solo 401(k) plan is a savings option designed specifically for self-employed individuals. Solo 401(k)s have similar rules to regular 401(k)s, but because you're allowed to fund your plan from both your personal compensation and business income, your annual contributions could be significantly higher. 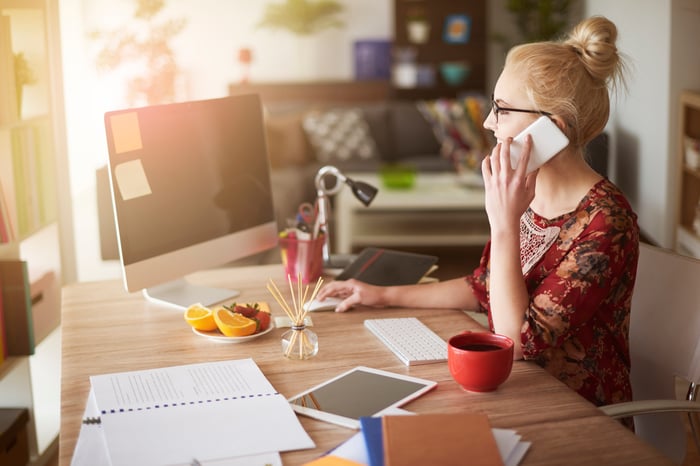 Solo 401(k)s work just like company-sponsored 401(k)s, only they're made for self-employed workers, or individuals who have no other employees other than themselves and their spouses. Hiring a part-time worker won't interfere with this requirement, but if you have employees who work for your business more than 1,000 hours per year, you won't get the option to participate in a solo 401(k).

Like regular 401(k)s, the primary benefits of the solo 401(k) center on tax savings. If you open a traditional solo 401(k), the money you contribute will go in on a pre-tax basis. However, your withdrawals will be taxed as ordinary income once you retire. If you opt for the Roth version of the solo 401(k), you won't get an immediate tax break, as Roth accounts are funded with after-tax dollars. But with a Roth, once you reach retirement, your withdrawals can be taken tax free. Furthermore, Roth accounts don't impose required minimum distributions, which means you can let your money sit and grow indefinitely.

Regardless of whether you go the traditional or Roth route for your solo 401(k), another key advantage is that you won't have to pay taxes on your investment gains along the way. This means you'll be free to reinvest your earnings and keep growing your savings. And while you'll eventually pay taxes on your gains in retirement with a traditional solo 401(k), with a Roth, you'll benefit from complete tax-free growth.

Of course, solo 401(k)s aren't all rosy. They can be complicated and costly to set up, and you'll still be subject to the same administrative fees for which company-sponsored 401(k) plans are notorious. On the other hand, solo 401(k) plans come with generous annual contribution limits that, if maximized, can put you in a great position once retirement rolls around.

Though you'd think being self-employed might limit your options for retirement savings, in reality, the opposite is true. Self-employed individuals typically have even more choices with regard to tax-advantaged retirement accounts. The solo 401(k) is just one of several plans available to self-employed workers, so if you're committed to saving for the future, it pays to explore your options and see which type of account is right for you.

What Is a Solo 401(k)? @themotleyfool #stocks Next Article
Current