The money you manage to save can be invested in a number of ways. If you're the aggressive type, you might achieve good growth with stocks. If you're less aggressive, you can opt for bonds. But if you'd rather play it safe, then a certificate of deposit, or CD, could be the right choice for you.

CDs are savings accounts offered by banks, credit unions, and other financial institutions with fixed interest rates and maturity dates. They frequently come with minimum deposits and impose penalties for early withdrawals. CDs are a good investment option for those who are risk-averse, as well as those who are heavily invested in stocks and bonds and wish to diversify. And they certainly have their share of benefits and drawbacks. 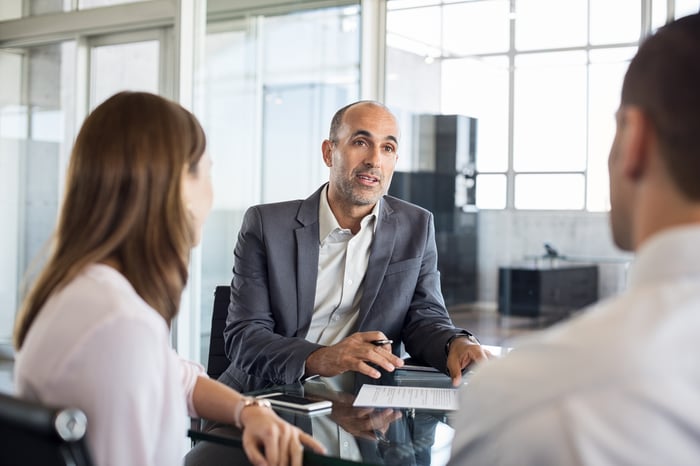 Imagine you have $5,000 on hand and you're looking to protect that principal while snagging an interest rate that's higher than what you'll get from a savings account. You might choose to lock up that money in a one-year CD. In doing so, you agree not to touch that $5,000 for 12 months, and in exchange, your bank gives you a better interest rate that earns you more money. Then, once that one-year period expires, or your CD matures, you get your $5,000 back plus the interest at the rate you were promised.

There are plenty of good reasons to put your money into a certificate of deposit. First, if you're near retirement, or are already retired, and can't afford to risk losing money, CDs offer that protection, as they're virtually risk-free. That's because, as is the case with savings accounts, CDs are FDIC-insured for up to $250,000 per depositor. This means that if you're married, and you and your spouse set up a joint CD in the amount of $500,000, you're guaranteed to get that $500,000 back in full, plus interest, provided you don't touch that money early and get hit with a penalty.

Another reason you might invest in a CD is if your portfolio is already loaded with stocks and bonds. Having some money in cash is a good means of diversification, which can protect you from market downturns.

Finally, CDs might be a good choice if you're the type of person who just plain can't stand taking on risk. If the idea of putting money into stocks or bonds will keep you awake at night and cause you undue stress, then opening a CD is a reasonable means of growing your money.

Advantages of opening a CD

The primary benefit of opening a certificate of deposit is that it's basically a risk-free investment. As long as you don't exceed the FDIC insurance limit of $250,000 per depositor, you can rest easy knowing that with a CD, the principal amount you put in is protected.

CDs also offer more favorable interest rates than regular savings accounts. For example, as of April 2018, Marcus by Goldman Sachs is offering a 2.10% annual percentage yield (APY) for a one-year CD versus a 1.60% APY for a regular savings account. The APY on a five-year CD, meanwhile, is 2.75%, and the minimum investment for either option is just $500.

Furthermore, you can benefit from CDs without having to lock your money away for extremely lengthy periods. Many banks offer one-year and six-month CDs, which give you far more flexibility than longer-term investments.

Finally, CDs are a fairly liquid asset in that if you need your money before your term runs out, you have the option to access it right away. Granted, you might face a penalty for withdrawing your money early, but it'll be there for you in cash. Selling stocks and bonds, by contrast, isn't as easy -- you need to find a buyer and could potentially lose a lot of money if you sell at a point when prices come down.

Drawbacks of opening a CD

While certificates of deposit are a safe investment, so are savings accounts -- yet CDs offer far less flexibility. With a regular savings account, you can access your money whenever you choose. With a CD, you'll face a penalty if you withdraw from that account before its term is up. The penalty will depend on the terms of your CD. Generally, you can expect to lose a few months' worth of interest, though in some cases, you'll risk losing a portion of your principal, too.

It's for this reason that CDs, like stocks and bonds, aren't a great place to house your emergency savings. Your emergency fund needs to be immediately accessible without penalty at all times, since you never know when you'll get hit with an unplanned bill.

Another snag you might hit with CDs is that those with the most favorable rates tend to impose higher minimum deposits. For example, your bank might offer a one-year CD at a rate that's higher than most institutions are offering, but that rate might come with a $25,000 minimum.

But perhaps the biggest drawback of CDs is that you'll only get a limited return on your investment. And that can hurt you over time.

Imagine you're looking to lock away $10,000 in a five-year CD paying 3% APY. Once that CD's term is up, you'll be looking at $11,593. But if you were to put that same amount into stocks instead over a five-year period, you might score a 7% average annual return on your investment, which is actually a bit below the market's average. That, in turn, would leave you with $14,025 once those five years are up. And the longer you invest in CDs over more aggressive options, the more potential growth you lose out on.

If you're saving for retirement in an IRA, you may be thinking about putting some of that money into a certificate of deposit. When you open an IRA, you get the option to invest your money as you see fit, so you might choose to keep a portion of your savings in a CD. Doing so is a good way to not only protect your principal, but also avoid many of the fees associated with traditional investments, like index and mutual funds. Remember, there's no cost to open a CD, and the only fees you'll have to worry about are those that apply if you withdraw your money early.

On the flip side, CDs offer limited growth compared to more-aggressive investments, as we saw above. If you put too much of your IRA into a CD, you could stunt your savings' growth, thus increasing your chances of running out of money during retirement. Of course, if you're already retired, have enough money to live off, and want to protect your principal, you might choose to put much of your IRA into a CD; but during the growth phase of your account, that's a move that could hurt you.

The fact that CDs require you to lock your money away is a major disadvantage to opening one. But if you build a CD ladder, you'll get the benefits of a CD and more-consistent access to your money.

With a CD ladder, you're staggering your deposits so that you have different CDs maturing at various points in time. You might, for example, set up your CDs to come due at six-month or one-year intervals. Then, when each CD matures, you'll have the option to reup on that CD, invest that money elsewhere, or use it as you see fit.

CD ladders can also help ensure that you benefit from the best interest rates possible. Imagine you lock away $10,000 at once in a two-year CD and find a much better interest rate three months later. Suddenly, you're forced to pay a penalty or wait out the term of your CD. But if you break that $10,000 into four equal parts and stagger your CDs so that they come due in six-month intervals, you'll get a chance to capitalize on better rates when they come up.

Incidentally, the laddering strategy is commonly used with bonds as well, and for good reason: Like CDs, bonds force you to lock your money away for a specified period. Laddering not only minimizes your risk of missing out on better interest rates, it also gives you increased liquidity.

How to open a CD

Your first step in opening a CD is deciding which type you want to put your money into, and shopping around for the best rates. There are different CD types you might choose from:

Once you land on a CD type, you'll want to find the most generous rates within your investment budget, keeping in mind that some of the better offers come with minimum investments. You can check out this list of the best CD rates for an overview of what's out there. Another option is to call different banks, or visit their websites, and see what their rates look like.

After you decide where you'll be opening your CD, you'll generally have the option to do so in person at a local bank, or online. You can fund your CD by writing a check or transferring money directly from another account.

Is a CD right for you?

If you're looking for a way to earn more interest than what a traditional savings account offers, and you know you won't need your money for a given period of time, then putting it into a CD is a good way to generate some decent risk-free income. On the other hand, if you're looking to grow your money on a long-term basis, CDs generally aren't the best way. A good compromise might be to put a portion of your total assets into a CD, but divvy up the rest among stocks, bonds, and other more-lucrative investments. This way, you get the best of all worlds -- a degree of protection with the potential to accumulate more wealth.