Please ensure Javascript is enabled for purposes of website accessibility
Log In Help Join The Motley Fool
Free Article Join Over 1 Million Premium Members And Get More In-Depth Stock Guidance and Research
By Michael Douglass - May 5, 2018 at 10:46AM

It's probably even less than you think.

The typical millennial has absolutely nothing saved for retirement, according to a recent study released by the National Institute on Retirement Security. More precisely, 66% of millennials have zero socked away for retirement. The median savings among the remaining 34% is $19,100, which puts the vast majority of my generation far behind where we need to be. Of course, some are doing really well -- the average savings among that one-third with retirement accounts is $67,891, which indicates that a few people, at least, have a ton in savings and are balancing out the rest -- but the overall picture for the millennial generation is pretty grim. 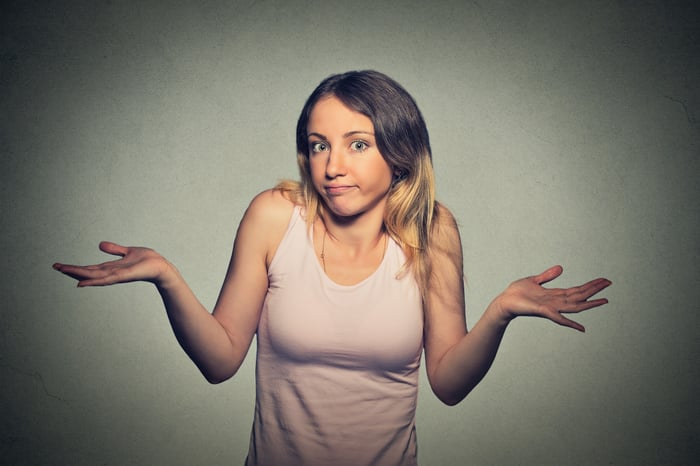 There are a variety of explanations out there. Certainly many millennials are burdened by student debt; the average 2016 graduate had just over $37,000 in student loans. Others are blocked from a workplace retirement plan at their job; employers are not required to offer 401(k)s to part-time workers, or those who have been at the organization for less than a year. Still others don't work at an employer that even offers a 401(k) -- only an estimated 14% of companies provide a retirement account, although those firms employ the vast majority of Americans, since many are household names with huge workforces.

There are certainly people who argue that we misuse our money, paying for avocado toast and lattes when we should be throwing every dollar at debt reduction or retirement. We've all heard this tired argument before -- that we should forgo any kind of happiness at all until our financial house is perfectly in order. It's a fundamentally counterproductive argument: Moving forward on the big-ticket items (renegotiating bills and debts, for example) requires a great deal of work, and attaching a reward (like a latte) to that work can certainly help us get it done faster.

Many of us have a number of different problems we're trying to solve, while juggling a number of debts (student loan, car loan, credit card balance) and also trying to set aside something for retirement. The question, then, is: Where to focus first?

Generally speaking, the right first move is to build up an emergency fund so that the next medical bill or car repair doesn't throw you into a financial tailspin. Assuming you have a few dollars to put away per month (and if you don't, that's when I would suggest trying to find ways to trim your expenses), you'll want to build up at least a $1,000 safety net. I know that's a frustrating answer -- watching yourself get eaten alive by interest payments on debt while you're putting $1,000 into some low-yielding savings account isn't fun -- but it's the right move to get you on track.

Next, you might make a simple chart with the various places you could put your money. It could look something like this:

Data by author (numbers are meant to be illustrative only).

Correctly prioritizing which debts to pay down first is important, and I can tell you that wiping out that credit card debt should almost certainly be the first priority. It's both a larger minimum payment than the other two, and it carries the highest interest rate. That 18% rate means you get a better return on paying down the credit card debt than in most investing scenarios, because the market has historically yielded around 7% annually after adjusting for inflation.

So take the extra cash you were funneling toward your savings account until you built that $1,000 balance, and now start funneling it toward paying off your credit card faster. If that was $100 a month, shifting that extra bit to your credit card minimum payment instead will trim a year and a month from your payoff date, saving you a little over $1,400 in interest.

Plus, paying off your credit card (and never carrying a balance again) frees up a bunch of extra cash for you to apply elsewhere. Once it's gone, you can take the $460 you were paying toward the credit card each month and use it elsewhere.

Then should I save for retirement?

Probably. The 7% returns you can get in the stock market are now starting to look pretty attractive -- better than the amount you're losing in interest payments on the car and student loan -- and there are some additional benefits to saving for retirement.

If you have access to a workplace retirement plan like a 401(k) or 403(b), chances are good you have a company match -- that is, money your company will pay you to incentivize your saving for retirement. A typical match is 3% in exchange for you saving 6% of your salary toward retirement; if you make $50,000 a year, maximizing that match would require you to put away $250 per month. That's a lot easier once you have no credit card debt, and the returns are impressive. Thanks to the matching funds, the $250 a month you pay is actually worth $375 per month, an automatic 50% return even if the stock market doesn't make you any money that year.

All retirement accounts, of both workplace and individual varieties (the latter are IRAs -- you can use them if you don't have access to a workplace plan), carry some tax advantage:

I personally prefer Roth plans, but your mileage may vary -- the key question to ask yourself is whether you think you'll be making more money in retirement than you are today. If yes, Roth may be the better option -- if no, go the traditional route.

See, it's not all about the returns

Although you actually theoretically get a better return on contributing to a workplace retirement plan -- that is, if you're getting that 50% boost to the cash you contribute thanks to the company match -- I'm still in favor of tackling credit card debt first. Wiping it out gives you more financial flexibility to handle whatever may happen down the road in a way that contributing to a retirement account can't. That's because retirement accounts (particularly the traditional variety) carry some pretty harsh penalties for using that money for nonretirement purposes -- meaning the money ideally should stay locked away until your golden years.

Wiping out credit card debt first, by contrast, means you have extra cash coming in each month that you can pay toward whatever comes: surprise bills, reducing debt, adding more to your retirement accounts. And ultimately, that financial flexibility is the key to boosting your retirement savings beyond the sad state they might be in today.