The traditional IRA vs. Roth IRA debate is one of the most hotly contested in all of personal finance. And there are solid arguments for each side. But I know how important it is always to save for retirement, and here's why I prefer to save in the Roth IRA.

1. I'm optimistic about the future

One of the core arguments for a traditional IRA is that it gives you a tax break right now -- when you contribute -- so you get to pocket that cash immediately. And don't get me wrong: I think that argument makes a lot of sense. But I'm an optimist, and so I go Roth.

The core issue is tax rates: Will you pay more in taxes now or later? Because you pay taxes either way -- either up front by contributing after-tax dollars to the Roth, or later if you contribute pre-tax dollars to the traditional. I like to think that I'll have a lot more money in retirement than I do now -- and will have a higher income because of all those investments, too. So I'd rather eat my vegetables now, get the taxes out of the way, and reap the benefits later when I have a lot less optionality.

There's another component to this optimism: The average American man sees his earnings peak around age 49. I'm 28, so I think there's plenty more upside. And at some point, it's possible that I'll make more than the maximum income limits for contributing to a Roth IRA ($199,000 for married filers in 2018, likely higher in future years). If so, I'll be forced to stop contributing to a Roth IRA -- so I'm going to do it while I can! 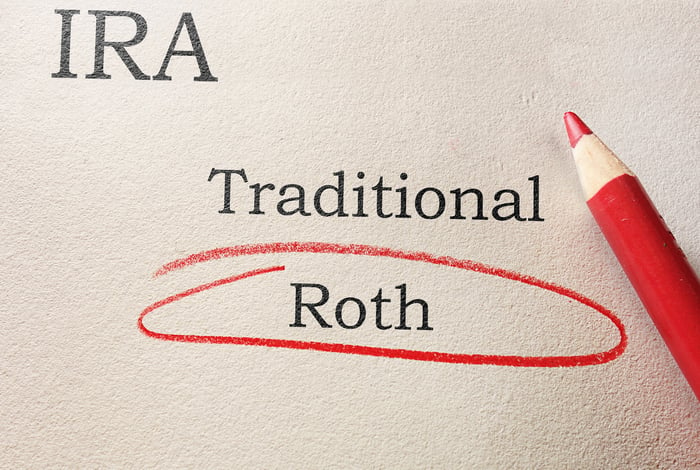 2. It gives me flexibility in retirement

When you reach 70 1/2, the IRS begins requiring you to take required minimum distributions from a traditional IRA. The government has a lot of deferred tax revenue tied up in the IRA, so it wants to get that cash from your account. So you have to withdraw a certain amount each year (you can calculate your IRA required-withdrawal amount here) and pay taxes on it, regardless of whether you need it or not.

I find that annoying. I would much rather maintain total control over my finances and withdraw what I want from wherever I want to, when I want. That's particularly true when taxes are involved. The Roth IRA doesn't have a requirement minimum distribution requirement.

Before I say anything else, let me emphasize: Dipping into retirement funds should only be done when you don't have other options. That said, if you're financially up against a wall, you might consider tapping your Roth IRA.

When withdrawing from a traditional IRA before age 59 1/2, generally you pay taxes on every dollar you withdraw and a 10% early withdrawal penalty. Put a different way: When you need the money most, less of it is available to you, and you pay all kinds of extra fees to access it. Roth IRAs don't come with an early withdrawal penalty, and you've already paid taxes on your contributions -- so you will pay taxes only on gains that you withdraw early. That means you have more money available to you when you're in financial straits. I think of it as an emergency fund of last resort.

Now, I haven't been quite fair to traditional IRAs -- there are some specific circumstances in which you can withdraw from a traditional IRA penalty-free -- but for me the whole idea of emergencies I can't prepare for is...they're unknown. So I'd rather not be limited to using the money in certain ways if life happens.

Here's where our stories may diverge

I'm assuming you're reading this because you're trying to determine whether a Roth or a traditional IRA makes better sense for you. I can't tell you that -- only you can decide. But for me, there's no question: Roth IRA all the way.

When I Save for Retirement, I Choose the Roth IRA. Here's Why. @themotleyfool #stocks Next Article
Current